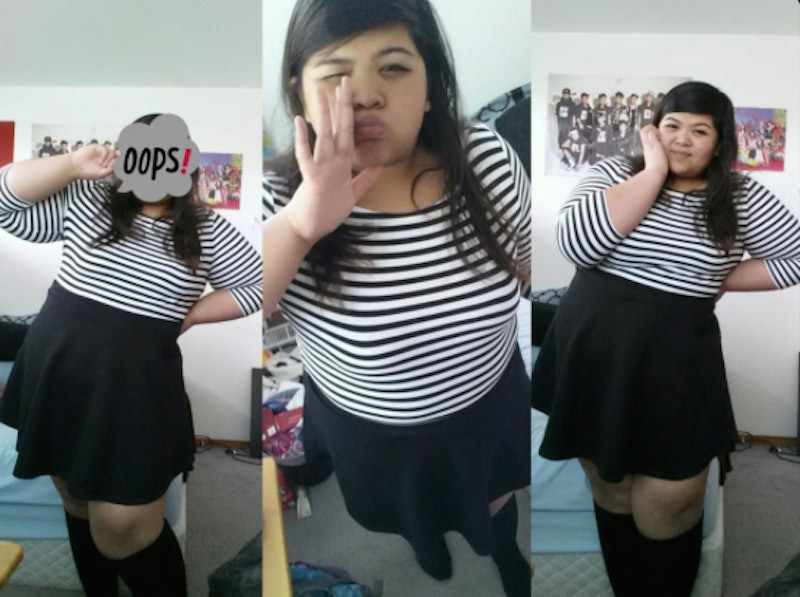 Thanks to a recently released study conducted by Emerald Publishing Group (for which they held in-depth interviews with 12- to 17-year-olds), we've gained some insight into how the plus-size teen fashion market often fails its customers. While most of us probably suspected as much, the new research definitely makes one think more about the premise that the way clothes are made for young women can often ruin a teen's developing sense of self-image. Considering adolescence is a tough enough time as it is, the way clothes are made shouldn't be yet another a contributing factor to a young girl's and her family's misery — as the study puts it.

From my time spent working at Justice (a store for preteens), I recall seeing a girl about the age of 12 come in with her mother. Within moments, they walked out of the store. But not before I heard the girl say to her mom, "I just want to go home. I hate buying clothes."

She walked out of the store feeling what I perceived to be defeated and frustrated. I stopped the mother before she followed her daughter, and told her I was sorry that they had to have such an unpleasant experience when it came to shopping. She commented on how it happened all the time, and that buying clothes was pretty much the bane of their existence.

As for myself, I can remember some pretty tough times growing up as well; trying to find clothes that would fit my ever-growing breasts and thighs. That was over 15 years ago, but the story is still the same for teen girls with plus-size bodies: The market not only contributes to the lie that grown women are made to believe — that we should all be able to fit into a certain size and look a certain way — but encourages teen girls to subscribe to the same mentality, due to the lack of well-fitting clothes for bigger bodies.

Here are the few major things Emerald Group brought light to in the report:

The reality? All of the above are issues that force girls into boxes, and inhibit self-expression and the beautiful self-discovery that should come along with adolescence.

Beginning with the first point, I must confess that I never stopped to think about how teen athletes might be affected by the image ideals placed on girls through the fashion industry. But it makes sense. Athletes will obviously have muscle, and often a different, sometimes more maturely formed physique than the cookie-cutter adolescent the market portrays.

What this means is that when the industry only allows room for one type of girl — who apparently doesn't or shouldn't bodily mature before the age of 16 or 17 — it is not only hindering and shaming curvier girls for becoming who they are, but failing to cater to young athletes as well. This may sound far-fetched, but I would bet that there are girls out there who have wanted to pursue sports but have actually been stopped short in their endeavors for fear of becoming too "bulky," and thus unable to buy the types of clothes they might like to.

Perhaps one of the reasons why so many sporty and athletically-inclined girls are put into a stereotype of being "butch" or "boyish" is because they are forced into wearing only athletic clothing that fits them (not that there is anything intrinsically wrong with either aesthetic characteristic). And perhaps many of these same girls would enjoy wearing more "girly" fashions, but they are simply unable to do so due to the lack of options in larger sizes.

Of course, no person (a teen girl or otherwise) who actually prefers wearing sports clothes instead of frilly dresses deserves to be boxed into any label either, but I'd like to assert that there are female-identifying athletes out there who are feeling inhibited in showing off their "girly" side, thus resigning to being a part of a stereotype before learning the confidence to defy that stereotype.

Onto the second point the study suggested, it's a shame that plus-size girls are forced to skip a whole sartorial time period in their lives, suddenly being forced to move onto more mature styles from the ladies department. While I'd never want to hate on fashion marketed at older women, it is sad that many girls have to skip the bright colors, glitter, and fun that's out there on the racks — designed for their actual age — and replace these things with options they'd see on their older sisters or mothers.

If teen girls want to dress in these fashions, that's of course their choice. But the reality is that they are still being forced to miss out on something that I'm sure many of their friends are able to experience, all because of their size. Size should not be something that keeps a young girl from experiencing things meant for her age. That should be her decision. Not something forced upon her.

And as for the marketing perspective of things? It honestly makes no sense to me whatsoever when companies choose to ignore a potential money-making aspect. If plus-size apparel for teens is a gaping hole in the market, how are retailers and designers not willing to do something about it — even if just for money's sake?

Is there really such a societal agenda out there striving to make us women — starting from a young age — all believe a lie about what we should look like? If so, that's obviously sick, and I hate it. But if it is just a blind spot, then surely that's a good thing, because it means someone, somewhere, will eventually do something about it. Despite what extending a brand's size range could mean for production — more costs in producing more fabric for more sizes — they have to realize that plus-size girls will be willing to spend on clothes made for them. As Emerald Group reported:

Teens are influential consumers with increasing spending power, much of which is spent on their wardrobe. In 2007, an estimated 26 million 12-17-year-olds in the U.S.A. had an income of $80 billion and spent 42 percent of it on apparel (Schaefer et al., 2009). By 2011, the number of teens in the U.S. had grown to 32 million having a disposable income of over $172 billion per year (Bachlet and Crozier, 2012).This trend in teen spending has steadily increased, and in 2013, U.S. teens were expected to spend $200-300 billion, with 40 percent of purchases being apparel-related items (Fox, 2013). In addition, teen’s family members have reported spending increasing amounts on purchases for their teens. In 2008, parents and grandparents in the U.S.A. reported spending an average of $1,918 per year on apparel for their teens (PiperJaffray, 2009). By 2012, it was estimated that $208.7 billion had been spent by family members on purchases for their teens (Statisticbrain, 2013).Fashionable apparel continues to be the top spending category for female teens and they are willing to spend their own money and influence family spending to obtain the desired items (Boris, 2013).

Here's hoping that the market trends will change and that our sisters, cousins, daughters, or friends don't have to deal with the misery the industry insists on creating.