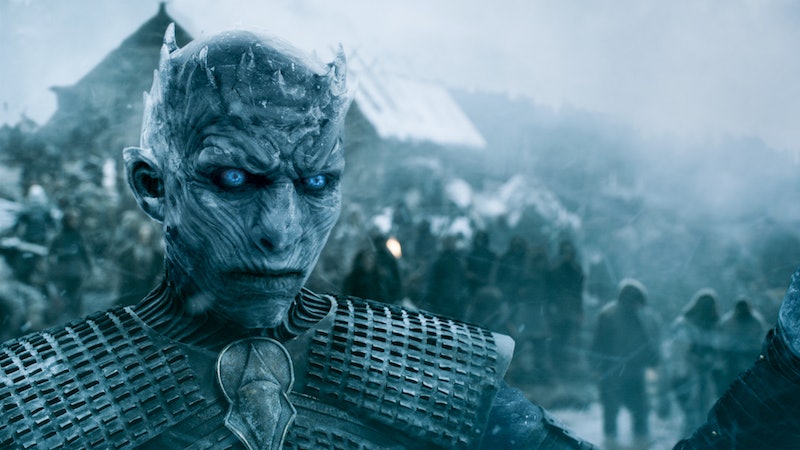 Last Sunday, HBO's Game Of Thrones finally gave audiences a taste of what they've been craving for almost five years, with the epic battle between the Night's Watch, the Wildlings, and the White Walkers' army of wights at Hardhome. It was one of the most intense sequences in the show's history, it was a moment five seasons in the making — and it proved that the Stark family is even more central to the Game of Thrones story than we thought.

Not only was it some of the coolest action in Thrones history, but the battle at Hardhome also gave viewers a second glimpse at the legendary "Night's King," a figure only hinted at in the books. He was revealed on the show in Season 4 when he took Craster's offering of a baby boy and turned the babe into a White Walker with one touch of his icy finger.

The fact that showrunners David Benioff & D.B. Weiss introduced this figure even before author George R.R. Martin reinforces the fact that the remaining Starks are all key players in the events to come. It's funny to remember how Stark-centric Season 1 of Thrones was. Ever since the deaths of Ned, Catelyn, and Robb — and the vanishing of Bran and Rickon — it often feels like the story has moved on, leaving the Northern family in the dust. But, if last week's episode is any indication, the story will circle back around again, making the five living Stark children the protagonists (and antagonists?) of the endgame.

So who exactly is the Night's King and what does his presence have to do with the Starks? Let's examine each of the siblings in descending age order:

Obviously bastard brother Jon is the sibling with the greatest connection to the Night's King, given their recent confrontation at Hardhome. But, he's not only tied to the leader of the White Walkers through battle — According to legend, passed down from Old Nan to Bran, the Night's King was the thirteenth Lord Commander of the Night's Watch, thousands of years ago during the Age of Heroes. He fell in love with a woman with "skin as white as the moon," "eyes like blue stars," and "skin [...] cold as ice." He gave his soul to her, took the Nightfort (one of the castles along the Wall) as their home, and ruled for many years. It took the combined might of the Night's Watch, King-Beyond-The-Wall Joramun, and King of Winter Brandon "The Breaker" Stark to end his reign of terror.

It's unclear how Sansa will tie into war with the White Walkers, given that she's not a warrior like Jon, an assassin like Arya, or a warg like Bran. But, the show has maneuvered the eldest Stark daughter into a position that puts her in closer proximity to the conflict than where she exists in the books (where she was safely tucked away in the Vale of Arryn). I see two possibilities for Sansa's future. The first is the most likely: If she succeeds in Littlefinger's plan to overthrow the Boltons and become the Wardeness of the North, she will lead the Stark contingent in battle against the Night's King alongside Jon of the Night's Watch and Tormund of the Wildlings.

My second theory is admittedly more outlandish: We already know from legend that the Night's King has a weakness for lovely women. His love for a seductive White Walker is what turned him into an ice zombie in the first place. What if all of Sansa's experience with sadistic men (her betrothal to Joffrey, her marriage to Ramsay) was all to prepare her to learn how to woo the most twisted man of all: The Night's King? Perhaps a kiss from beautiful Sansa is all that's needed to turn the beastly leader back into a human. (Fun fact: George R.R. Martin worked for three years as a writer on the 1987 television adaptation of Beauty And The Beast. I'm just saying.)

If the eldest two Stark siblings seem likely to fall on the side of good, the allegiances of the next two are decidedly more dubious. Arya is currently in Braavos, training to become a Faceless Man in the House of Black and White, so she's the farthest removed from the conflict. But, she'll have to return to Westeros eventually, and your guess is as good as mine what will happen when she does. The Faceless Men worship a deity called the Many-Faced God. In his honor, they give men (and women) the "gift" of death.

So, we have a group of assassins who literally worship death, and we have an army of ice zombies who literally represent death, using reanimated corpses in the war against humankind. Is it possible that the god the Faceless Men worship is actually the Night's King himself? If so, what will happen if Arya's first official assignment as an assassin is to eliminate the man standing in direct opposition to the God of Death: Young Lord Commander Jon Snow?

As we all know, Bran is sitting this season out, chilling off-screen while training with the Three-Eyed Raven under the weirwood tree north of the Wall. He will presumably return in Season 6, having fine-tuned his abilities to both greensee and warg into any living being. And, just what will he use these abilities for? Being a Stark, we hope the answer will be: For vengeance against the terrible, horrible, no good, very bad Lannisters and Boltons. But, the real answer is likely more complicated than that. It's important to note that Bran was led to the cave by the Children of the Forest. This is a race of elf-like beings who predate the arrival of men in Westeros by thousands of years. When the Andals crossed the Narrow Sea, they drove the Children from their homes, hacked down most of the weirwood trees, and nearly slaughtered their race to extinction. The Children were forced to flee beyond the Wall — where Bran has now joined forces with them.

Basically, what I'm saying is: They're unlikely to feel much sympathy for the plight of humankind. What if the Children are simply waiting for the White Walkers to wipe the race of men from Westeros so they can return and reclaim their homeland? Or what if — god forbid — they're actually in league with the White Walkers, both pursuing a common goal of humankind's extinction? Old Nan didn't just tell Bran that the Night's King was a Stark; she told him that he was a Stark named Brandon. What if the Three-Eyed Raven has been training the Night King's namesake to become his ancestor's loyal lieutenant in the war to come?

So we have two Starks on the side of good and two (potentially and unwittingly) on the side of evil. Appropriate, then, that the youngest Stark would be the wild card in this scenario. We haven't seen little Rickon since he took off into the wilderness with Osha in Season 3 — but if the books are any indication, he's hanging out with cannibals and unicorns on the island of Skagos, off the northern shore of Westeros. It's unclear if or when we'll ever see him again.

Perhaps Rickon will save the day, riding into battle on the back of a unicorn and leading his cavalry of loyal cannibals to decimate the army of wights. Or maybe Rickon will stay out of the conflict completely, arriving in Westeros after the war is done to pick up the pieces and rule what's left of his family's lands as King in the North. But, whatever happens, the arrival of the Night's King just proves that soon Game of Thrones is likely to get back to being all about the Starks.