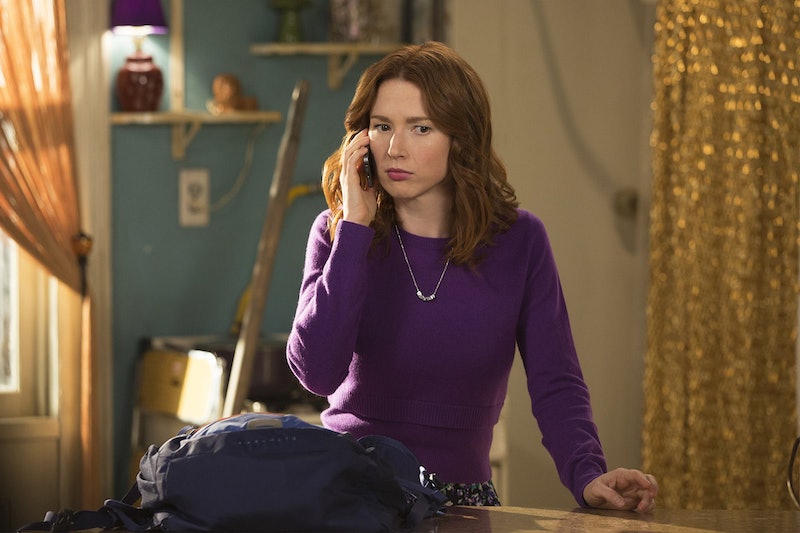 Don't get me wrong guys, it's not that I don't believe in online dating. It's just that I'm pretty sure everyone I don't personally know is a murderer who either wants to sell my kidneys to a wealthy crime lord with two weeks left to live or collect my tears in a jar for witchcraft. Like, people who follow meet each other on Tinder and live happy lives together? That's great for you. I know a lot of you. Follow your millennial bliss. Meanwhile, I will be hiding in the far reaches of the internet, so paranoid of online dating that I'm leaning into dying alone and considering becoming a cat. (Not just buying one—I passed that freeway exit on loneliness a long ass time ago.)

Look, we're all told we're supposed to embrace singledom and live in the moment and blah, and I'm all about that. I've been single (by choice, not that it's anyone's beeswax) for four years now and have had nary a complaint. But at some point did society just decide it was unfeminist of me to say that I'm lonely, and I want someone to make grilled cheese with me and charitably laugh at my bad jokes? I've reached that point now. I'm ready to ~mingle~ again. Problem being, if you want to ~mingle~ living in a big city, you pretty much have one viable option: The internet.

The internet does not discriminate. The internet is open season for murderers, drug lords, and Nickelback listeners, and all of them have just as much access to OKCupid as I do. So yeah, it makes me squirmy. It makes me want to want to Google things like "citizen's arrest" every time I see yet another ex-frat guy posing with a freaking tiger. But this is the 2015 we live in, so here I go, internet. As of yesterday, I became an online dater. And as of yesterday, the true depth of my ridiculous paranoia has been revealed, through all of these stages of it I have already endured:

1. The complete and utter desperation phase

I had a brief self-assessment wherein I tried to remember the last time I actually flirted with another human being, and I'm pretty sure accidentally grazing a stranger's butt with my backpack on the subway doesn't count. (That's right. My backpack gets more action than I do. FEEL MORE SORRY FOR ME THAN YOU ALREADY DO.) So it's been approximately eight hundred years since the last time I even put myself in a flirt-worthy situation, let alone actually gone on a date with someone. Desperate times, desperate measures. Dating apps and sketchy websites, here I come.

2. The "Imma need a big old glass of wine" phase

Specifically the five dollar wine bottle I bought after describing my needs to the salesman as "not just cheap, but sad person cheap".

Like most millennials, I'm a wee bit obsessed with myself. I get excited when an app so much as asks me what my birthday is. Hell yeah I'll fill out this questionnaire and reveal all my fragile hopes and dreams to the internet! In those first five minutes of telling a bot that your favorite food is grilled cheese and that you enjoy long walks in the park making faces at people's babies while their backs are turned, you really start to think that anything is possible.

Yeah, I'm quoting Les Mis, come at me. No other words can perfectly describe that "oh sh*t" moment when your profile goes live. It's like willingly jumping into an ocean full of piranhas, hoping that there's one cute, derpy fish that you might want to date. And to someone as paranoid as me, it's the emotional equivalent of swinging the apartment door wide open and yelling, "HERE I AM, SERIAL KILLERS!"

5. The texting everyone you know for validation phase

I would like to take this opportunity to apologize to almost everyone on staff at Bustle for mass texting my entry into the online dating world as if I were announcing my debutante ball. I can't just do things of my own volition. I have to do things, and then immediately seek the approval of other millennials for it to feel valid.

So obviously I'm there to meet humans, when all of a sudden one messages me and I remember something pretty crucial: I hate humans. OK, that's not entirely true. But on most nights, I'm liable to blow off even my best friends to watch 30 Rock reruns and eat my way through the quarter pound of sliced Jarlsberg I order from the deli every week. And now these total strangers want me to chat them back? Do they even know how many texts I have ignored in my inbox right now?!?

I'm not gonna lie, guys. I look fine in some of my profile pictures. But I know better than to put up my foxiest pic on a dating app, because A). I don't think those photos do justice to my dorktastic personality, and B). I'd rather someone be interested in Every Day Me than Hot Me That Time I Remembered To Put Lipstick On. I felt it was important to strike a balance between the two, so as not to invite creepers. (We've seen firsthand that wearing a lot of makeup on dating sites tends to invite more creepers, but guys, that is an entire thesis of uncool that I'm not even going to get into right now.)

To be fair, I tend to not get a lot of creepers anyway. I have the kind of face that says "Your mother didn't raise you this way, Timothy Bob Joe." But I am also somewhat prone to not getting creepers because I avoid internet dating like the damn plague. Eventually I just slapped on a picture of myself holding a cupcake, because romance is dead and at least these potential mates of mine will know that if they do come over to my apartment to stab me dead, I'll have delicious post-murder snacks.

8. The attempt to get over your big baby self phase

I have to remind myself every thirty seconds at the beginning of this journey across the world wide web that I am not the first person to online date. In fact, I am so late to this party that I could physically call up a friend on a Razor flip phone and be all, "Wow, Uggs are SO COMFY, who knew?" and I'd probably be less of a millennial disappointment than I am right now. So it's time to buck up, I guess. I am not a super special online dating virgin snowflake anymore. I'm a grown ass adult with a WiFi connection and and I have to act like one.

9. The "What would my mother think?" phase

You wanna know why I'm so paranoid about online anything? Because in my teenagehood, my parents were so committed to that whole "keeping me alive" thing that they banned me from even having a Facebook until I was 16, and even then, they had all the passwords to my accounts until I turned 18. Every inch you guys took on the internet was a mile for me, the Sandra Damn Dee of Twitter. So yeah, I'm pretty sure my parents aren't super chill with the idea of me meeting men on the internet for kicks, but at the some point they're gonna remember that I'm their best chance for grandkids and me dying alone deeply hinders that.

I tend to make all of my questionable decisions on the internet late at night, which is why I now own a S.T.A.R. Labs t-shirt from The Flash and also why I have an account on a dating site where a man has the username JustAReallyNiceGuy3. (Where are JustAReallyNiceGuy1 and JustAReallyNiceGuy2? Are they OK? Did you battle for the alpha with your...niceness?) Anyway, I am a grandma, so sometime around ten o'clock I decided I was going to bed and in the morning I'd feel less squirmy about everything. My dating app fairy godmother had my back, surely. She'd match me with Tinderella overnight. Everything was going to be fiiiiiiine.

Ah, the cold, bleak light of day. Upon waking, I immediately rolled over to check my e-mail, where upon I discovered so many messages from strangers that my whole body seized with panic. STRANGERS ON THE INTERNET WERE LOOKING AT ME. STRANGERS ON THE INTERNET KNEW WHAT CITY I LIVED IN AND THAT I LIKED GRILLED CHEESE AND SPIDER-MAN AND TAYLOR SWIFT. GOOD GOD, ABORT, DELETE, DELETE, DELETE.

12. The deep breath, "What is my actual problem here?" phase

Something I have pondered in the hours since I recklessly deactivated my account: I have no problem sharing things about myself with the internet. I don't have to even be on a dating site for people to find out intimate, personal details about my life, because I over-share on Twitter like it's my job and I also over-share all over the internet because it is my actual, legitimate job. The only real difference between me doing it here and me doing it there is that there is a huge vulnerability in the presentation of it on a dating app. "Here I am. Look this tiny screen-sized capture of my soul, and consider dating me, please."

I realized that it's not that I'm embarrassed or scared of people knowing things about me on the internet—the "paranoia," perhaps, is actually my complete and utter discomfort with people out there in the world knowing that I am actively trying to not be alone in life. Trusting total strangers with the fact that you are upset about being single is its own very strange form of intimacy that happens the literal moment they swipe onto your profile, before they even read or look at anything. And that right there? That's scary.

See ya on the interwebs, my fellow single peeps. Here I come.

More like this
Hinge's New NFAQ Feature Is Demystifying Queer Dating
By Emma Carey
The Best Time To Date After A Breakup, According To Experts
By Bustle Editors
How To Change Your Twitter Handle
By Emma Carey
How To Use Instagram Story Highlights So Everyone Sees Your Fave Stories
By Brandi Neal and Emma Carey
Get Even More From Bustle — Sign Up For The Newsletter