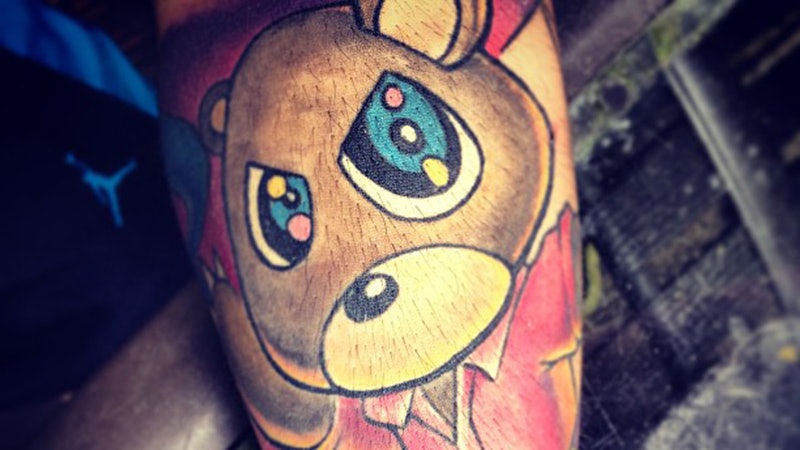 When you envision a timeless classic—something that will definitely be as pertinent tomorrow, in a year, or even after a lifetime—as it is today, surely Kanye West comes to mind.

What better way to pay tribute to this legend in our own time, than by emblazoning one’s skin with the pearls of wisdom that drop from this visionary’s lips daily? Or better yet, why not just etch the stoic face upon your bicep to ward off haters forever? After all, a tattoo is one of the most ancient forms of body art. Combine a skillfully scripted letter with the poignant idea that formed it (A.K.A. the lyrics to Kanye's "Can't Tell Me Nothing"), and you’ve got the makings of a tat that’s definitely all that.

Ahead, the best Kanye West tattoos the internet has to offer. But be prepared! You might just be tempted to go get your own Kanye hashtag tat after this.

It's pretty Yeezy to understand. Does he have to spell it out for you?

Oh did you think that was just a run-of-the-mill teddy? Nope, that's Dropout Bear, Yeezy's official mascot. Paws off.

4. Take Me To Yeezus

The sky has parted, the groovy sunbeams are shining, and Dropout Bear is going home, you guys.

You heard the man. Cursed! But this half life is still complete, just as long as we've got Kanye in the driver's seat.

Oh, you thought Kanye's affinity for sunglasses disappeared when the hype surrounding Kanye's 2007 "Stronger" did? Nope! Kanye's shade style lives on forever on this person's arm.

You'll still have to lace up your Yeezys and run to keep up with him, though.

And what is Kanye, exactly? The best. You do the math. It's like Kanye said, "I'm a pop enigma. I live and breathe every element in life. I rock a bespoke suit and I go to Harold's for fried chicken. It's all these things at once, because, as a taste maker, I find the best of everything."

We want Yeezus is trending on this person’s arm (and in your heart) forever.

More like this
Kim Kardashian Pays Homage To Kanye West’s Fave Film In New Swimwear Pics
By Bustle Editors and Maxine Harrison
Are John Legend & Kanye West Still Friends? The Singer’s Latest Update Is Candid
By Brad Witter
Kanye West Has The Most Kanye Reaction To Kim Kardashian & Pete Davidson's Split
By Jake Viswanath
Most Comfortable Underwear For Big Butts
By Audrey Williams
Get Even More From Bustle — Sign Up For The Newsletter