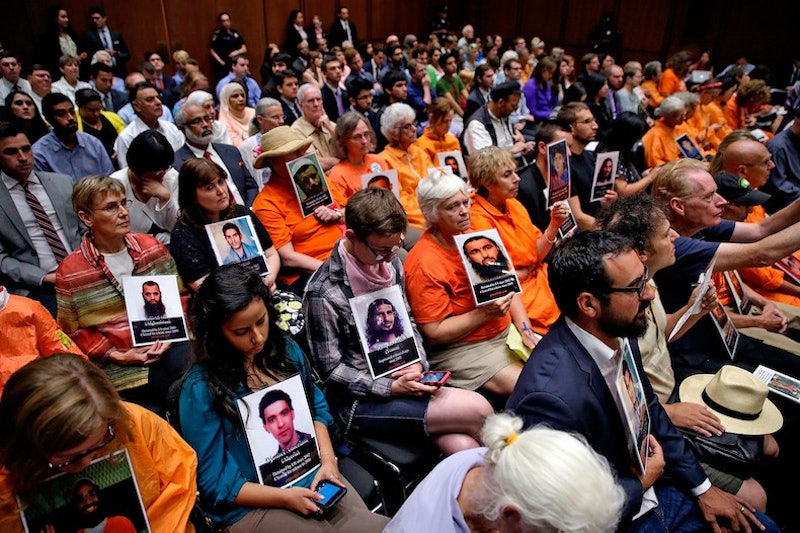 The American military prison at Guantanamo Bay, Cuba turned 12 Wednesday. For the duration of our War on Terror after the September 11th attacks, the prison has been used to house suspected terrorists and radicals from across the world, including prisoners from Iraq and Afghanistan. For many of those housed at Guantanamo, there are no rights, no privileges, and no end in sight. In light of Gitmo's 12th anniversary, we bring you 12 things that you shouldn't forget about Guantanamo Bay.

"We're going to close Guantanamo. And we're going to restore habeas corpus," Obama said in 2007. "We're going to lead by example — not just by word but by deed. That's our vision for the future." Those words inspired the American left following years of executive power abuses and war crimes by the Bush administration. In fact, Obama even signed an executive order to end Guantanamo within a year after taking office in 2009. But now, it's more than a term later and Guantanamo is still open, with no end in sight (due in part to the fact that congress blocked the president from bringing those incarcerated at Gitmo to U.S. courts for trial). Code Pink is not happy:

It's important not to fall into the trap of clearing all of the Gitmo prisoners just because the prison itself is extralegal and uses questionable interrogation techniques. After all, it's housed some real bad guys, like Khalid Sheikh Muhammad, the mastermind of the 9/11 attacks, or Hambali, al Qaeda's Southeast Asia chief. Many join or rejoin terrorist groups upon release.

3. But we also house teenagers there

Omar Khadr was 15 when he was arrested and put into the Guantanamo Bay prison. He allegedly threw a grenade that killed an American soldier in Afghanistan, but he was also a minor and a Canadian citizen, thrown into Guantanamo with no right to a trial. There were other juveniles at the prison, too, including four who were released in 2004. They were thought to be between ages 13 and 15.

4. Only seven of the nearly 800 prisoners have been convicted and sentenced

Yup. Only seven of all the men who have passed through Guantanamo have been convicted and sentenced. They were tried in military commissions and found guilty of "providing material support for terrorism." The others live in a state of limbo, because rights that prisoners commonly have in the U.S., like the right to a speedy trial, don't apply in the off-shore military prison. Many have been there for years, without even knowing what the charges against them might be. Getting tried and sentenced is one of the best ways to get out of the prison: five of those seven men are no longer living in Guantanamo.

One of the "enhanced interrogation techniques" (read: torture methods) that made Gitmo famous was waterboarding: the process of covering someone's face with a towel as they're lying down, and pouring water over their heads until they feel like they're drowning. Then you stop, and repeat. Except they don't just feel like they're drowning; you're actually cutting off their oxygen supply. Christopher Hitchens didn't last when he volunteered to experience it for Vanity Fair:

Earlier this year, we reported on how some Guantanamo detainees had been on a hunger strike for over six months to protest injustices at the prison. When Nadya Tolokonnikova of Pussy Riot went on a hunger strike for similar reasons, she received international support. The Guantanamo prisoners, however, were repeatedly force-fed. Mos Def demonstrated what the force-feeding program entailed:

Eventually, the U.S. military stopped releasing daily statistics on the hunger strike because, it said, the numbers hadn't changed much. We're sure the decision had nothing to do with the negative publicity the prison was getting. (As of Oct. 15, the hunger strike hadn't stopped.)

A report released earlier this month showed that doctors were required to sidestep medical ethics in order to help with prisoner interrogations. As we reported:

The practices required included “designing, participating in, and enabling torture and cruel, inhumane and degrading treatment” of detainees, necessitating that doctors and nurses “forgo their independent medical judgment and counseling roles” and “force-feed competent detainees engaged in hunger strikes” — in spite of the fact that this is forbidden by the World Medical Association and the American Medical Association.

8. Allegations of abuse are constant

In addition to waterboarding and force-feeding prisoners at Guantanamo Bay, the military personnel at the prison apparently treat Islam with contempt. The prisoners weren't allowed to be properly dressed for prayer, and guards reportedly stomped on the Quran. Some of the behavior also apparently bordered on sexual abuse and violated Islamic rules about contact between men and women. There's even a gag order on some prisoners that prevents them from publicly discussing the claims of abuse, despite their attorneys' best efforts.

9. Things are so bad some prisoners have taken to suicide

In 2006, there were three much-publicized suicides at Guantanamo, in which prisoners apparently managed to hang themselves and remain undetected for hours in one of the most high security prisons in the world. It's still not quite clear how that happened, why all three looked the same, or why the prisoners each had a rag shoved down his throat.

10. Information about the prisoners is now available on Wikileaks

And we can fact check governmental claims about the prisoners. The Guardian's Thomas Wilner reports that the truly bad guys can all be indicted and tried, based on the available evidence, contrary to the U.S. government's statements. (Thanks, Chelsea Manning!)

Seventy percent of the overall public don't see a problem with keeping Gitmo open, including 53 percent of self-described liberal Democrats. (It's not the first policy to encounter less resistance when used by Barack Obama than George W. Bush.)

The president appears to have recently relaunched efforts to close the prison and met with two special envoys for Guantanamo. Information about the meetings remains scant, though some reports say the president is looking into relocating some of the prisoners to a facility in Yemen.

"The Guantanamo facility continues to drain our resources and harm our standing in the world," Press Secretary Jay Carney said. But, as our wars in the Middle East wind down, it's important to remember that the prison at Guantanamo is still operational. One hundred and sixty-four men currently reside there. After all, as world attention shifts to Syria, Iran, or Somalia, it would be all too easy to forget.

More like this
6 Organizations Fighting Police Brutality That You Can Support Right Now
By Syeda Khaula Saad and JR Thorpe
Eurovision Has Been Given A Whole New Look Ahead Of Its Liverpool Debut
By Bustle UK
How To Help Those Affected By The Turkey-Syria Earthquake
By El Hunt
This Is When Netflix Is Going To Start Charging You For Sharing Passwords
By Darshita Goyal
Get Even More From Bustle — Sign Up For The Newsletter
From hair trends to relationship advice, our daily newsletter has everything you need to sound like a person who’s on TikTok, even if you aren’t.