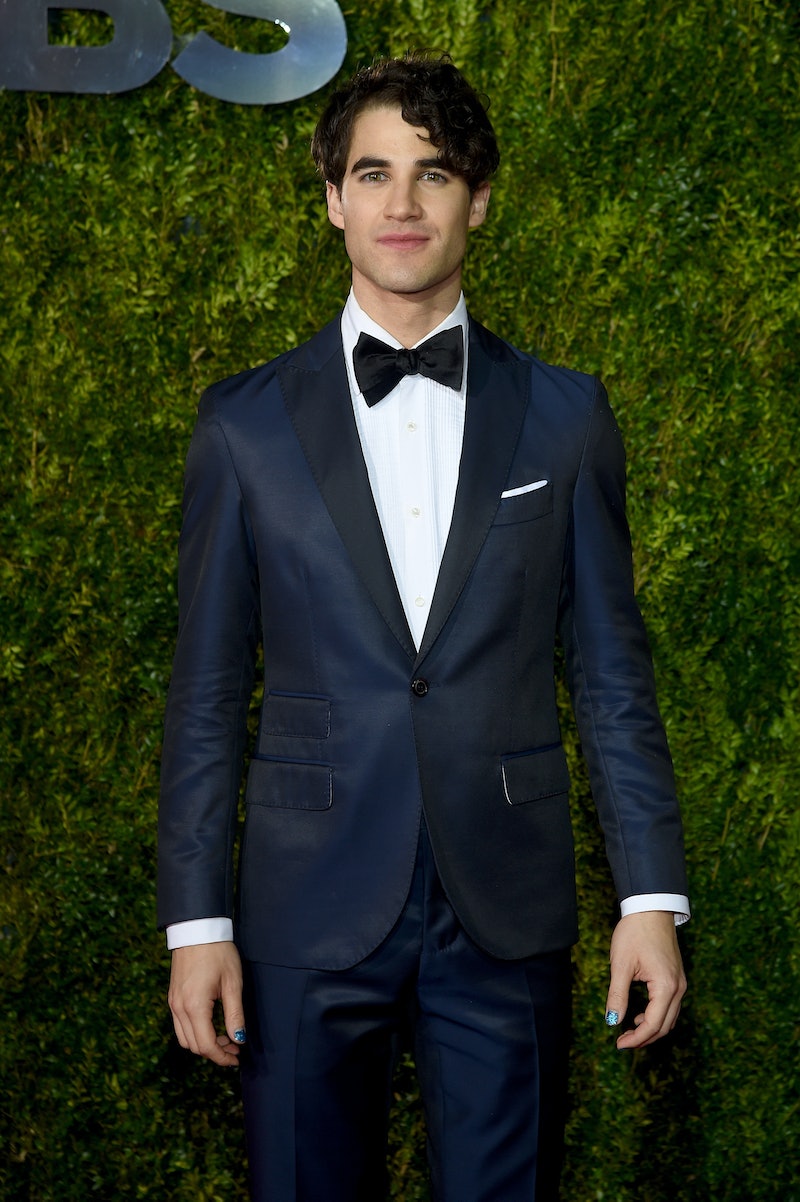 Darren Criss may have been late for his job as one of the hosts of the 2015 Tony Awards Red Carpet on June 7, but his tardiness was no issue on the biggest night in the theater industry. The minute he rolled in, Darren Criss was completely adorable on the Tonys red carpet. Although the other two hosts, Laura Osnes and Sierra Bogges, were doing just fine on their own with their enthusiastic banter, Criss brought the energy on the red carpet up a notch.

The fact that Criss had the energy to make it to the red carpet after his matinee performance of Hedwig and the Angry Inch on Broadway, let alone be a host of the Tony Awards event, is an impressive feat in itself. But what makes it even better is how charismatic and damn cute Criss was interviewing other Broadway stars. His professionalism shone as he graciously handled a Helen Mirren handshake diss, but he really impressed me with his ability to small-talk with Broadway's best. The Glee star who got his start in A Very Potter Musical during college showed he belonged on the red carpet on Sunday night. And here are just some of his most endearing moments as host.

1. When He Exclaimed Chita Rivera's Name

Not only did Criss geek out by screaming "CHIIITAA!," but he also called the iconic stage actress "hot."

2. When He Had The Best Manicure On The Red Carpet

Criss has his nails done for his role of Hedwig, but the turquoise really compliments his dark locks.

3. When He Reunited With Matthew Morrison

The Glee stars hugged it out and Matthew Morrison channeled Mr. Schue by telling Criss to do his homework.

4. When He Admitted To Having A Man Crush On Corey Cott

Criss told Gigi star Vanessa Hudgens that he has a bromance and man crush with her costar Corey Cott. Criss is definitely not alone in his crush on the Newsies star.

5. When He Fangirled Over Bernadette Peters

Who wouldn't fangirl over Bernadette Peters? And it was ultracute when he was shocked that she knew who he was.

6. When He Gave The Perfect Description Of Joe Manganiello

Sure, he mispronounced his name, but then he rallied with this excellent line.

7. When He Called Josh Groban By The Name Josh Brolin

Criss was just teasing the beautiful singer Josh Groban who will be serenading the audience for the In Memoriam section of the Tonys. And it doesn't hurt that these two curly-haired men both have my heart.

8. When He Quoted Chorus Line

While chatting with director and choreographer of An American in Paris, Christopher Wheeldon, Criss showed his total theater nerd side by saying, "Everything is beautiful at the ballet" from Chorus Line. Hey, he was just saying what all of us Tony watchers were thinking.

9. When He Interviewed This Adorable Child

In the battle of who is cuter, I still am going with Criss.