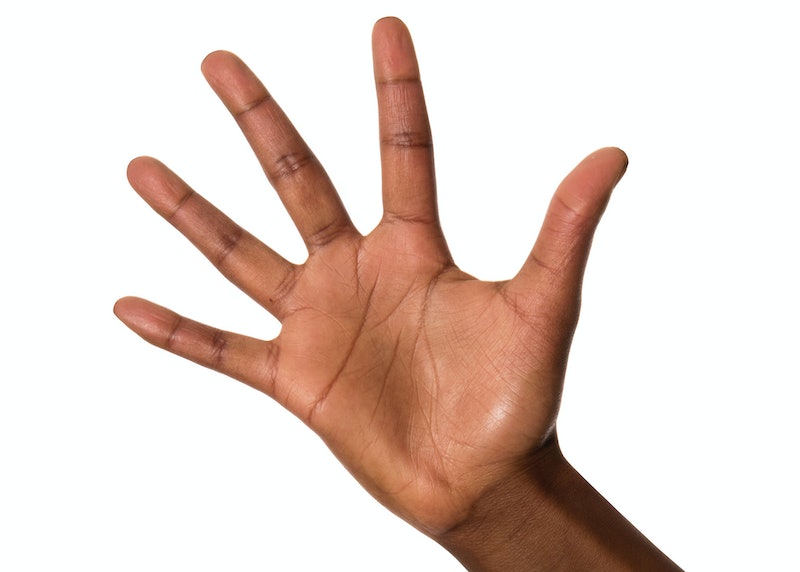 The concept of "white as default" — our tendency to think of "person" as synonymous with "white person" — is evident in a number of our daily interactions, including the habit of calling attention to a non-white person's race ("my black friend," "the Asian pop star") and, as Swedish design student Johanna Burai's World White Web campaign shows us, Google Image's search results. Burai noticed that when she typed "hand" into Google Search, all 800 results were images of white hands. Searching for other body parts, like "leg," yielded similar results. Furthermore, many of the graphic design blogs she visited were using images of hands, which were presumably acquired from Google and consequently all white, too.

The World White Web Campaign's website gives visitors images of hands of different races to download and share in order to balance out Google's search results. The project's description points out that Google Images provides just one example of how white privilege allows white people to go about their daily lives without even thinking about race while people of color face constant exclusion: "A lot of people choose to turn a blind eye to the privilege of simply being born white, as well as to the systematic racism experienced by people of color in their everyday lives," states the World White Web website.

People of color in Western society receive the message that they basically don't even exist in countless other ways, such as through the predominance of white people on TV and in movies (except when a person of color is brought in to embody a stereotype), the color of band-aids, and until recently, the color of emojis. There have even been stories of face-recognition software failing to recognize black people.

But, back to the Internet. These image search results got me thinking about other ways human biases and inequalities might be engrained in the technology we use. Here are a few other examples I've come up with of online searches gone wrong — although before we begin, let me also take this moment o note that it is in fact Google users who have popularized these results, not the company itself. We're responsible for all this, people, so if you're horrified... well, we should really be horrified at ourselves.

1. "Why do black people" yields the most offensive auto-fill options possible.

If you are genuinely curious about the origin of "ax," it was first used by white people: Chaucer wrote in The Canterbury Tales, "Yow loveres axe I now this questioun." Over time, this word became less popular among the upper class and more widely used by indentured servants, whom slaves worked alongside and picked up English from.

2. According to these suggestions, feminists are ugly, stupid, and apparently anti-vaccination.

Thankfully, if you make it to the results, you get a comprehensive Wikipedia entry describing feminism as "a range of movements and ideologies that share a common goal: to define, establish, and achieve equal political, economic, cultural, personal, and social rights for women."

3. Are women evil and/or do they possess smaller brains?

Hey, it's good information to have. After all, you need to understand women's brains if you're going to protect yourself from their evil powers.

The first time a female body shows up is in an illustration of ideal proportions. And we all know the results would look different if the search was for purposes other than education (I'm not going to show you those). In addition to "white as default," "male as default" dictates that a body that supposedly represents the searcher would be male, and one that supposedly represents "his" sexual preferences (combined with the view of heterosexual as default) would be female.

5. Searches wonder whether "transgenders" are "crazy."

And now, I'm going to take a shower because I feel like a creep typing all these terms into my browser.