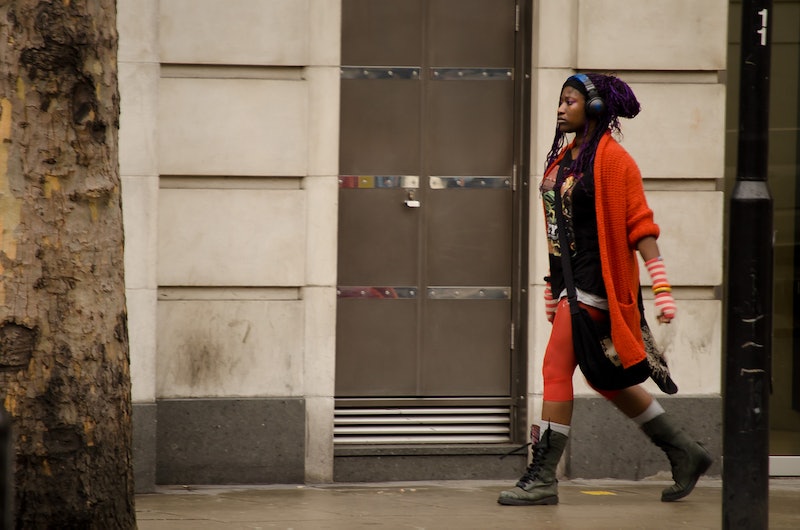 We’ve all been there: It’s a beautiful day, you’re feeling great, and all of the sudden you hear a “pssst” in your ear. “Hey sexy,” the man standing entirely too close to you on the train platform whispers. And sometimes, that little bit of street harassment is all it takes for your day to go from carefree and awesome to stressful and crappy.

Sadly, there's always the risk of escalation: There's the story of Mary Spears, who was killed for refusing to give a man her number. Or the woman in Queens last fall who was slashed with a knife for declining a date with a man. Or the 14-year-old in Florida who was run over with a car after she turned down a man who had solicited her for sex. Or the case of Islan Nettles, who was beaten to death after a harasser realized that she was a trans woman. In a world where declining a man’s advances can be lethal for women, it's true that often the safest thing to do in the face of street harassment is to do nothing at all — though even ignoring a harasser can enrage him. We’re damned if we do, damned if we don’t.

There is absolutely nothing wrong with ignoring a harasser, with not firing back, with walking on, and turning up the volume of your music. The only right way to respond to street harassment is the one that makes you feel safest and most empowered. That may change from situation to situation, or from day to day. But for me, there’s nothing better than those situations when you have the perfect response ready to go and you know that you’ve bested a harasser who threatened to ruin your day.

1. Tell them you feel disrespected.

I walked past a man who was standing outside a building, hanging out, smoking a butt. He looked me down and said, “Hey, sexy.” I looked him in the eye and asked him if that was really how he spoke to women, because it wasn’t respectful. His face dropped, he looked at the floor, and he softly said, “I’m so sorry. I didn’t mean any disrespect.”

I was so taken aback by the apology that I almost didn’t know what to say. But I let him know that I absolutely accepted his apology — and hopefully, he learned a lesson that day.

A guy told me once that “it wasn’t that bad” and that I “really should smile” as I walked past him. I’d had the day from hell, and I just snapped. I smiled as widely as I could and yelled, “LIKE THIS? SHOULD I SMILE LIKE THIS ALL OF THE TIME AND WALK AROUND LOOKING LIKE A DERANGED CLOWN?” He looked utterly terrified and muttered “What the hell is wrong with you?” and walked away. Victory was mine!

3. If they're on the job, call their employer and make a complaint.

I was just trying to get home when I handed my credit card to the parking attendant. He began asking me a series of intrusive questions, telling me I was pretty, asking if I was married, and even where I lived. He also held onto my credit card so that I couldn’t just drive away from the interaction. So afterwards, I kept my receipt and called the parking company to report him for harassment. They were able to identify the man based on things he had told me about himself and when and where he was working. I was told that he was given a warning for the behavior.

This is now something I often do if a guy harasses me while he’s working, because it’s one of the few times that I actually feel like I have the power to ensure some consequences for him.

I was walking my dog and I passed two men sitting on their stoop. I heard, “Psst. Hey, baby.” I didn’t turn around. Then I heard the other one say, “Hey, sweetie.” So finally I turned around and said sternly, “That’s not my name.” Right on cue, one of them growled, “Bitch.” At that point, I broke into a huge smile and said, “Now that's my name!” They were speechless.

5. Embarrass them in front of their friends.

A group of men were sitting on their stoop as I walked by. One of them started hissing and catcalling me, and eventually asked for my number. So I turned around and asked him what he was hoping to accomplish by heckling me. He muttered that I was pretty. So I continued.

“So that must mean that you want my number because you want to take me out?” He indicated that he would very much like that. Feeling emboldened, I said, “Did you know that yelling at women on the street makes them uncomfortable? Why would you think that the way to get a woman’s number is by making her feel unsafe? Has this ever actually worked for you? Have you ever gotten a woman’s number this way?” I didn’t hear his answer, because by that point, his friends were mocking him too loudly. I continued on to the train station, feeling like my job there was done.

Of course, it’s not every day that I feel safe enough to fire back, and all of these interactions happened on crowded streets during daylight hours. But knowing that I can — and have — gotten the last word sometimes makes me feel just a little bit better.

More like this
UK Black Pride 2022 Just Broke A Major Record
By Sam Ramsden
Charlene White & MPs Lead Tributes For Bristol Bus Boycott Organiser Roy Hackett
By Sam Ramsden
Your Daily Horoscope For August 16, 2022
By Alexandria Lettman
How To Use The Whatnot App To Thrift Vintage Items
By Emma Carey
Get Even More From Bustle — Sign Up For The Newsletter