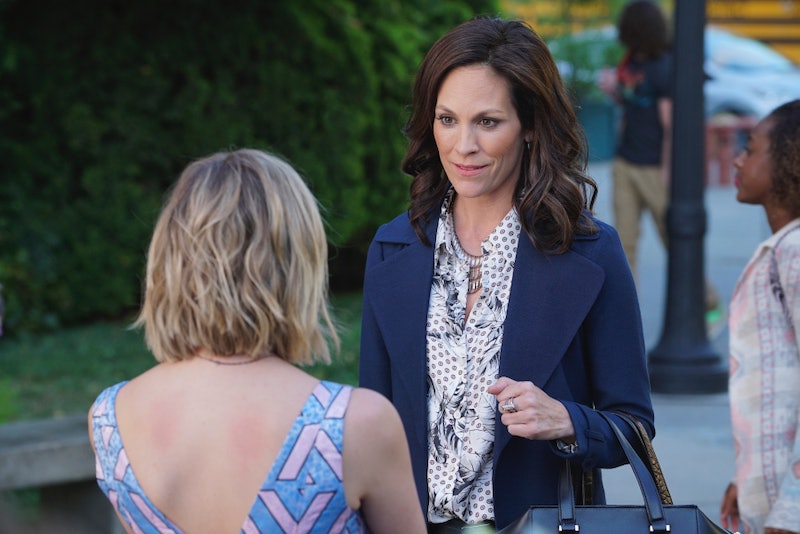 Is anyone else still practically convulsing after the Pretty Little Liars Season 6 premiere last week? Seriously, anyone? Because I'm starting to grow concerned that I have some weird kind of ABC Family mystery series-related medical condition, and I don't really know what to do about it. But, I mean, I guess that's a situation for another day, because we have bigger issues to deal with at the moment, namely the fact that Dr. Anne Sullivan, the therapist from seasons yore, is returning to Rosewood in Tuesday night's episode.

When you think about it, the doctor's return is really no surprise, especially when you consider what the girls just endured for almost a month in Charles DiLaurentis's Dollhouse of Terror. I'm thinking that, at the very least, the girls are going to need a hug and maybe a legitimate break from school and worrying about college to deal with what they went through, so the idea of a previously-known therapist coming to help isn't that out of the question. But this is Pretty Little Liars we're talking about, and there's no way the show's creators just brought Dr. Sullivan back so the girls could see a familiar face after enduring their significant (yet still mysterious) trauma.

But before we can get in to why she's really here, I think we need a little refresher course on who Anne Sullivan is. It has, after all, been a couple of years and many episodes since we last saw her on the show. Let's break her appearances down season by season.

We first met Dr. Sullivan in Season 2, when the girls' parents forced them to speak to her about what they were going through, thinking they were still upset about (and mildly) obsessed with Ali's murder. Keep in mind this is when A was still the biggest villain in Rosewood—there was no Varjack, Red Coat, or Black Widow, and it's likely that Charles was still a figment of creator I. Marlene King's imagination at the time. Her relationship with the girls strengthened over time, and they ultimately told her about A after Emily received that mad creepy massage from A back in "Touched By An A-ngel," one of the episodes that King mentioned was important in determining Charles' identity.

After Dr. Sullivan heard all they had to say about A, she received a phone call from the mysterious villain, which is essentially just a recording of Dr. Sullivan's voice from her session with the liars on a loop. When she got the police, the still-alive (and possibly Charles) Garret Reynolds refused to help her unless she revealed who told her about A, and being the loyal lady that she apparently was, she didn't tell on Hanna, Aria, Spencer, and Emily.

Finally, and perhaps most significantly, we were lead to believe that Dr. Sullivan had figured out who A was (when it was thought that A was Mona, that is), but before she could tell the girls, A got to her. The last we saw of her that season was her comforting the girls, particularly Hanna, after Mona was officially taken down.

Our first encounter with Dr. Sullivan in Season 3 occurred shortly after Emily killed Nate St. Germain, who ended up being Maya's "stalker" (I use quotes there because, quite frankly, I'm not too sure about the accuracy of anything where Maya is concerned). It was during these same therapy sessions that Emily underwent hypnotherapy and became convinced that she was the one who killed Ali. Remember that story arc? The last we saw of Dr. Sullivan was when Spencer was locked up in Radley, and Dr. Sullivan went to visit her and include her in a therapy group she was leading there.

And all of that brings us to the present! According to her IMDB page, Dr. Sullivan will be appearing in tonight's episode, "Songs of Innocence," and if her connection with the girls in the past is any indication, she'll likely be part of some big and potentially misleading reveal. Then again, maybe she does know more than she's letting on. It's possible that, in her years away or during her time at Radley, she learned more about the DiLaurentis family and Charles in particular. Or, better yet, it's possible that she's connected to Sara Harvey in some way. Only time will tell, but the return of such a familiar and significant face is not to be ignored.

More like this
10 Famous People You Forgot Guest-Starred In The Original 'PLL'
By Brad Witter
Every Horror Movie Reference In The 'PLL: Original Sin' Premiere
By Alyssa Lapid
The 'PLL: Original Sin' Creators Say A’s Identity Will Be “Very Clear” By The Season Finale
By Alyssa Lapid
Watch The Trailer For Netflix’s Edgy New Comedy 'FAKES'
By Brad Witter
Get Even More From Bustle — Sign Up For The Newsletter