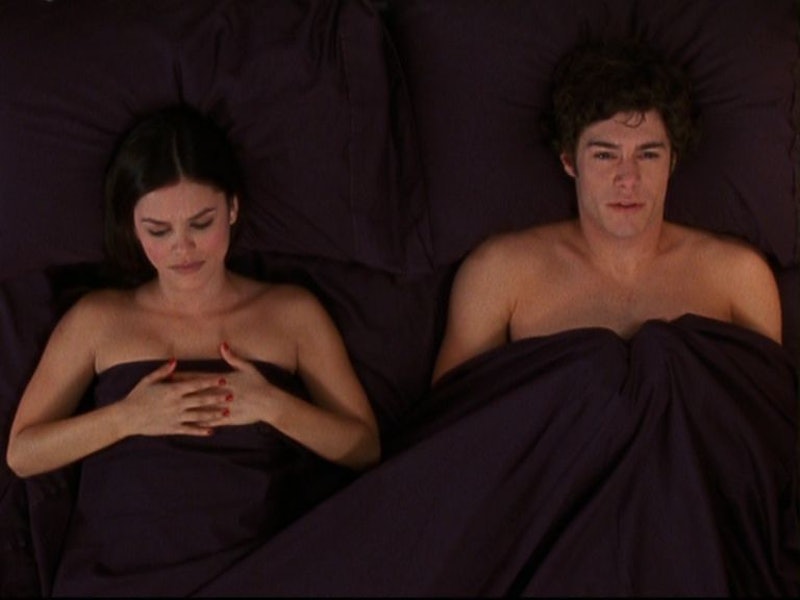 Asking me to choose episodes of my favorite television shows is like asking me to choose between the children I don’t have, but there one show is the big exception to this rule: The O.C. As a well-documented fan of the Josh Schwartz/Stephanie Savage-produced teen drama, I can unequivocally say which episode I would prefer to watch over and over again. Why is it so easy? Because every time I watch Season 1, Episode 19 of The O.C., "The Heartbreak," something just stirs in me.

For starters, it has the literal best musical moment on the whole show, which I’ll get to in a bit. In addition to that magical scene, however, it really has something for everyone: Nostalgia. Love. Sex. Great outfits. Forbidden trysts. Vindication.

Just for a quick summary, “The Heartbreak” takes place on February 14, and everyone in Newport Beach is prepping for the Valentine’s Day Singles Benefit Dance (yes, another party, and a mouthful of one at that). Luke has a new crush; Ryan and Marissa aren’t together; Summer and Seth are moving closer and closer to a real relationship; Ryan gets a blast from the past; and Sandy and Kirsten are having a tiny marital hiccup. Everyone on the show is involved here, and it’s wonderful.

And in case that rundown wasn't enough, here are the eight definitive reasons why “The Heartbreak” is the best The O.C. episode of all time.

A malicious ex-wife and a financial scandal have broken Jimmy, and Hailey is a party girl with daddy issues who just wants to find a nice guy. Um, hello, match made in heaven? She even makes Jimmy cookies! How sweet is that?

I was always a Seth-and-Summer ‘shipper. (Ryan and Marissa steal the couple spotlight too much, TBH.) Seth’s declaration of love for Summer (“It's always been you”) and their subsequent bad sex are both heartwarming and so true when it comes to first times.

A sex talk with a parent is always awkward, but Sandy Cohen takes the cake when asking who Seth slept with. He just seems happy his son found a girl who likes him. Points deducted for teaching Seth the “Vulcan nerve pinch” massage technique, though.

This is... I can’t even... there are no words. The best musical moment of The O.C. comes after Seth and Summer decide to take things slow and Seth tells Summer that he’s going to “sweep her off her feet” and then they DANCE TO RYAN ADAMS’ COVER OF “WONDERWALL” AND I CAN’T BREATHE.

5. Ryan Is Finally Vindicated About Oliver

No one believed Ryan when he said that Oliver was a raging psychopath and it made me so mad. But the well-meaning boyfriend got his comeuppance in "The Heartbreak" and finally told Marissa that he couldn’t be with her, because she didn’t believe him when he really needed her to. Sucks to be you, Marissa. You lost your boyfriend and you have bad bangs, which leads me to…

Embracing the clip-in bang trends of the early 2000s, this episode features the only appearance of these weird blunt bangs on Mischa Barton’s lovely head and looking back, they just make her scenes more fun.

7. Luke & Julie Are The Couple No One Knew They Needed

You guys, I know that it was never legal or anything, but I was so into Luke and Julie as a couple, even if it was just a hookup. Julie needed to be treated well, and Luke was there to do it. Obviously, things didn’t go so well when Marissa found out that her mom was boinking her ex-boyfriend, but hey, rose-colored glasses. Let the Bob Seger play on.

Theresa served as a nice way to personify Ryan’s past (and his former musical aspirations), and we see her for a moment of time in "The Heartbreak" as a cater waiter at the Valentine’s Day Dance Formal Bash Benefit.

Now if you’ll excuse me, I’m going to make like Julie Cooper Nichol Cooper Atwood and blast some “Night Moves.”