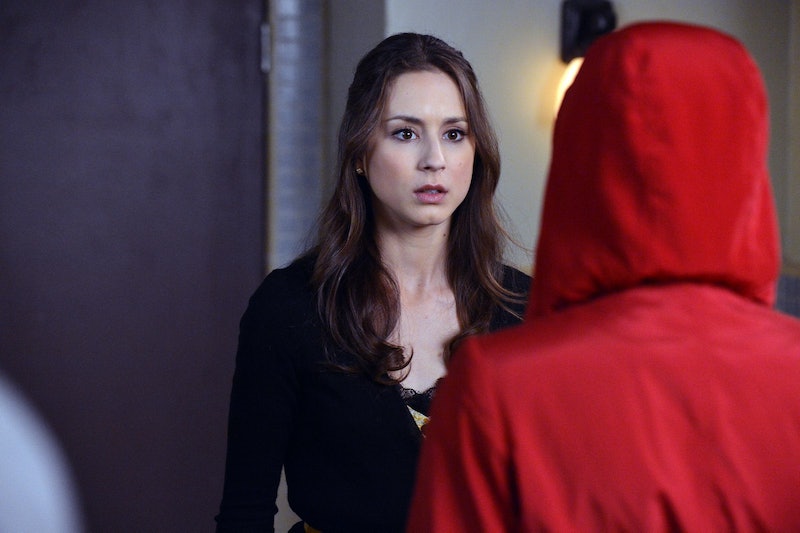 Last week kicked off the #SummerofAnswers on Pretty Little Liars and it started with a big one, as we learned that Sara Harvey was in Charles' dollhouse too. The blonde teenager disappeared the same weekend as Alison, so she's likely been Big A's prisoner — and Ali substitute — for about three years, since before the events of the show even started. But for as long as she's been Charles' captive, I don't think she was always physically in the dollhouse. Instead, I believe that Sara Harvey is Pretty Little Liars' Red Coat, and has been forced to do Charles' bidding since he took over the game from Mona.

The saga of Red Coat is a confusing one, since we now know that multiple people have donned the get-up. Sometimes it was Ali herself, hiding from A and keeping an eye on the Liars, while other times it was CeCe Drake impersonating her. However, it's very likely that there is a third Red Coat, as this is the person who Mona believed to be running the A game in Season 3. As Bustle writer Kaitlin Reilly pointed out, there seemed to be two Red Coats present at the lodge in the Season 3 finale "A DAngerous GAme," when Mona was in contact with Big A, who she kept referring to as a woman. While one Red Coat turned out to be Alison, who saved Hanna from the fire, someone else rescued the other girls, and Alison wasn't the person Mona believed to be Big A. Now that we know Big A is Charles DiLaurentis, a man, who was the woman Mona was taking orders from? And who visited her in Radley at the end of Season 2 to steal the A game?

I think that every time Red Coat wasn't CeCe or Alison, it was Sara Harvey — Charles' version of Alison. In addition to the defining coat, all we've seen of this A associate is long blonde hair and their body type, both of which Sara matches.

It's not that Sara is on the A team. Actually, I think it's quite the opposite. After being kept prisoner for so long, it's completely plausible that whether through blackmail, threats, psychological manipulation, or some combination of those, Charles forced Sara to do his bidding and essentially become the "face" of the A game. Her resemblance to Alison would cause anyone who caught sight of her to become very confused, and making everyone think A was a woman would let Charles stay off their radar.

We've already gotten a glimpse of the damage that being kept in the dollhouse caused for the Liars and Mona, who were there for about a month and a few months, respectively, so I can only imagine what it has done to Sara. Based on those markings in her cell and what her friends told the Liars back in Season 4, she's spent a lot of time in that bunker, and I think that once Charles had gained enough control over her, he began letting her leave the dollhouse, but only to do his dirty work. I mean, this is Big A we're talking about. He has eyes everywhere, and could have been keeping a close watch on Sara every time he sent her out.

I hope I'm right, because this would make for a very interesting Pretty Little Liars twist that wouldn't take away from the larger Charles mystery. If one of the other unidentified figures from the show is Sara, a fellow victim of Big A, it means that there's not another enemy for the Liars to worry about. They'll have simply uncovered a pawn in Charles' plan. I hope that once they've all recovered from their dollhouse trauma, the Liars and Sara can team up in Pretty Little Liars Season 6 and take down their common enemy.

For more PLL theories, check out Bustle's podcast, "Taking This One To The Grave," below.

More like this
At 14, Jurnee Smollett Was Taking Meetings With Missy Elliot & Lauryn Hill
By Chloe Foussianes
Shonda Rhimes' Net Worth Makes Her One Of The Wealthiest People In TV History
By Hugh McIntyre
The Best 'Grey's Anatomy' Intern Moments, From MAGIC to Glasses
By Grace Wehniainen
'The Rings Of Power' Episode 7 Will Feature An “Unlikely Pairing Of Characters”
By Grace Wehniainen
Get Even More From Bustle — Sign Up For The Newsletter