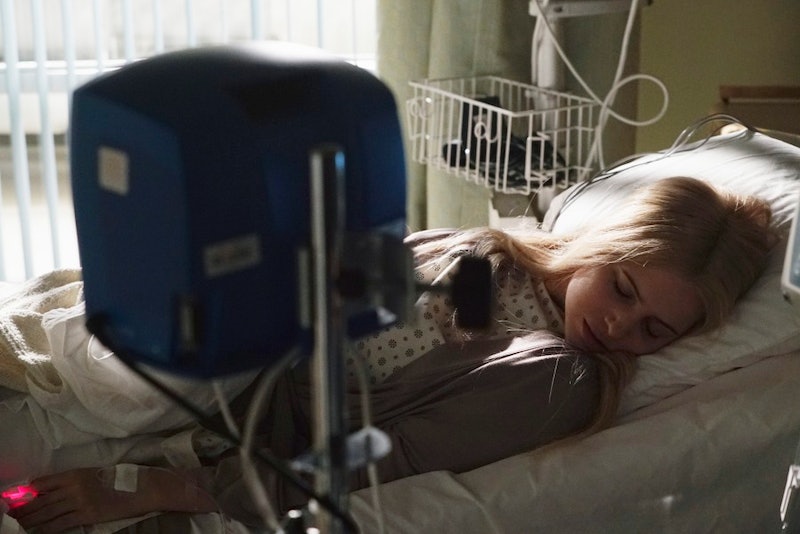 Looks like Charles' identity won't be the only riddle Pretty Little Liars wants us to solve. Now that the Liars & Co. have been rescued from Charles' dollhouse, fans have turned their attention to the show's latest wild card: Sara Harvey, who has supposedly been Charles' prisoner for over two years. That's a pretty long time to be with one's abductor. In fact, it kind of makes you wonder if Sara Harvey can really be trusted on PLL . Granted, that's a relatively common question we should all be asking ourselves on a daily basis, especially given this show's tendency of using misdirection and red herrings. Everyone has looked suspicious at some point or another. However, we've never met someone who's spent quite as much time in Charles' company like Sara has, which opens up a whole new terrain of PLL theories we hadn't even thought to explore.

I mean, think about it. Was Sara's rescue based on luck or was it something Charles orchestrated to have happen? If there's one thing about this guy that we know, it's that he never does anything without a reason. Sure, he may have been caught off guard when the Liars started torching his precious childhood memories, but I doubt he left Sara behind by mistake. A always has a back-up plan. (And then a back-up plan for his back-up plans.) So if he thought it would be alright to cut Sara loose, what does that really suggest us about her loyalties? She may have been an innocent victim at one point, but spending so much time in Charles' lair could've seriously warped her brain… along with her sense of what's right and wrong. (Plus who's to say this is even the first time she's left the dollhouse?)

Let's not forget that Charles is famous for one very big thing: blackmail. If I had a nickel for every time Charles blackmailed a resident of Rosewood to do his bidding, then I'd have enough money to open up my very own yellow top store. (I hear all the cool girls are wearing them these days.) The point is, though, that Charles can be very manipulative when he wants to be and right now Sara's growing placement within the Liars' inner circle could be his ultimate strategy move. She could be his secret mole that infiltrates and destroys the girls (along with their friendship) from the inside out. We've already seen how much sway her words have over the Liars…

For a group that was so sure about Andrew's guilt, all it took was a few choice words from Sara to plant the seed of doubt in their heads. Could she genuinely be trying to help? Maybe. But that doesn't mean she couldn't also be following orders from Charles, whether it's by force or her own volition.

Then there's Sara's whole family situation to consider. This is now the second time she's run away from home — the first being when she was originally kidnapped and the second being just days after she was rescued. That right there feels like a huge red flag that there's more to this girl than she's letting on. We know that Sara and Alison have quite a bit in common outside of their similar looks. Both were the Queen Bees of their friend group, and given Ali's knack for lying, what's to say Sara doesn't also share that same formidable quality?

Maybe I'm being a little overly suspicious here. (Though when dealing with PLL, there's really no such thing, right?) But until we get more information on Sara's background and motive, I'm not ready to rule her out of the A Team club just yet.

For more PLL, check out Bustle's podcast, "Taking This One To The Grave," below.

More like this
Every Horror Movie Reference In The 'PLL: Original Sin' Premiere
By Alyssa Lapid
The 'PLL: Original Sin' Creators Say A’s Identity Will Be “Very Clear” By The Season Finale
By Alyssa Lapid
What's New On Netflix: A Third '365 Days' Movie & Lili Reinhart’s New Film
By Arya Roshanian
Megan Thee Stallion Actually Auditioned To Be This 'P-Valley' Main Character
By Radhika Menon
Get Even More From Bustle — Sign Up For The Newsletter