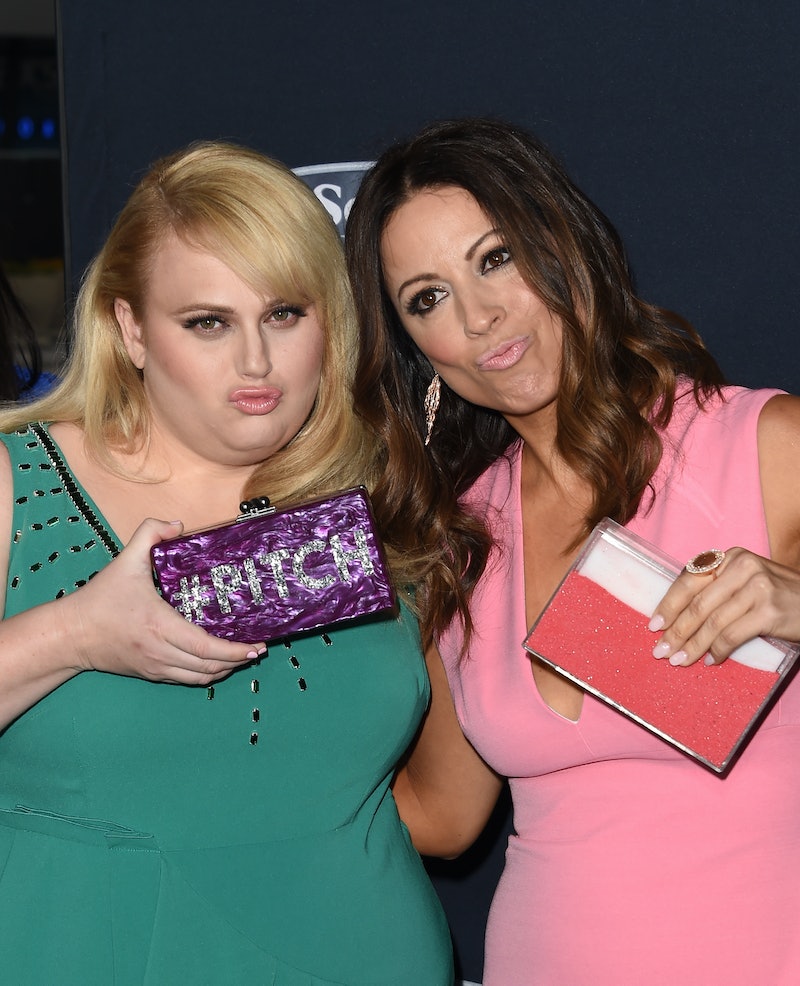 What do Liz Lemon, Jess Day, and Fat Amy have in common? In addition to being badass female characters, and the a cappella group of my dreams, they're all on writer Kay Cannon's resume. The Pitch Perfect scribe worked on 30 Rock and New Girl before being tapped by Elizabeth Banks to write the screenplay for Pitch Perfect and its sequel, and maybe even its sequel's sequel. Rumor has it that Pitch Perfect is becoming an epic trilogy, with Cannon signing on to write Pitch Perfect 3. Don't throw a parade just yet though: Bustle reached out to Cannon’s publicist for comment, and the publicist confirmed that she was unaware of the rumor.

Still, there's no harm in hoping that the former 30 Rock writer signs on for a third go. Cannon is a super-accomplished comedy writer who got her start performing improv comedy in Chicago, where she met Tina Fey. (Yeah, she knows T. Fey. NBD.) She not only gifted us with the character Fat Amy and aca-catchphrases, but also wrote for two of the best sitcoms ever, which just so happen to boast women showrunners. And it's no wonder that with a background like that, she's a zippy, whip-smart writer with a knack for the the absurd. Plus, she writes women who are both sassy and smart.

So, while we're all waiting for Cannon to just officially sign onto Pitch Perfect 3 already, I've gathered a few key 30 Rock and New Girl episodes (you can find them on Netflix), so you can get your fix and to get acquainted with this talented woman's work.

Tina Fey says this season one episode is pivotal one because of its weirdness. Paul Reubens (aka Pee-Wee Herman) plays an inbred Austrian Prince. "When we were on-set, we were joking that the episode was called 'Black Tie' but should be called 'Good-bye America!'" Tina told GQ, because the writers feared the episode was weird enough to get 30 Rock then and there. In the end, it's this lovable weirdness that made 30 Rock the masterpiece that it is.

In this episode, Liz Lemon goes to singles events with Jenna and, as you can imagine, hilarity ensues. Jack juggles two relationships with Julianne Moore — and more importantly — future Pitch Perfect 2 director Elizabeth Banks. Coincidence? I think not.

It gets real in Liz's relationship with Carol, played by the beautiful Matt Damon, as they realize how tricky it is to date someone exactly like yourself. Yikes.

"Everything Sunny All The Time Always" (Season 5, Episode 22)

Did I mention how wonderfully weird this show was? In this episode, Elizabeth Banks' Avery gets kidnapped while on assignment in North Korea. Yes, "Kim Jong-Il" "makes an appearance." (*cough* Margaret Cho *cough*)

Cannon wrote the Season 2 opener, which centers around Schmidt throwing a "re-branding" party after his penis cast finally comes off, you know, just like normal guys do! Jess gets in on the action as a "shot girl" and, as you can expect, it does not go as well as she hopes.

In this episode, Jess in all her Jess-ness struggles to keep with a clique of "mean girl" teachers at school, and Schmidt in all his Schmidt-ness tries to confirm his sexual prowess.

Cannon cameos as Jess' gyno friend Sadie's girlfriend in this episode and after Sadie warns Jess and Cece that as they get older they will only have so many eggs to turn into babies, they respond super rationally. (Please tell me you can sense the sarcasm.)

Remember when Cece was marrying Shivrang? Good times. But in this episode we get an epic "Fat Schmidt" flashback, and meet his college girlfriend Elizabeth who brought in trouble for CeSchmidt 'shippers.

And that should keep you going at least until Universal makes an official announcement, regarding the third film in the a cappella saga.