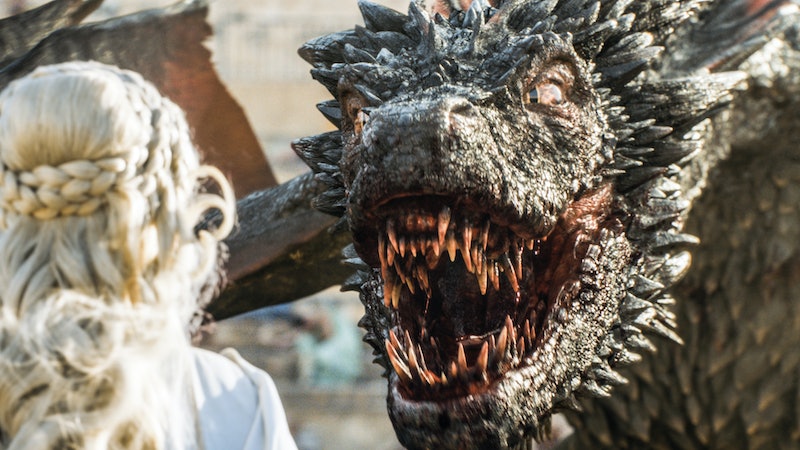 I don't know about you, but last week's episode of Game Of Thrones gave me a serious case of emotional whiplash. Going straight from the horrifying death of innocent Princess Shireen to one of the most exhilarating scenes in all five books — Dany finally riding one of her full-grown dragons and torching her enemies — was the epitome of the highs and lows this HBO show has to offer. But, as soon as the adrenaline faded, it became clear that the ending raised a lot of questions: Where's Dany going? Why did she leave all of her friends behind to fend for themselves? And, what about Dany's two other dragons on Game of Thrones?

Drogon has been on the lam since he torched and ate a shepherd's daughter last season. The last time we saw him before "The Dance Of Dragons" was in Season 5, Episode 5, when he flew above Tyrion and Jorah as they sailed through the ruins of Old Valyria. But, it's been just as long since we've seen his two siblings, Rhaegal and Viserion. They appeared in that same episode, when Dany fed an unwitting nobleman to her dragons as punishment for the latest attack by the Sons of the Harpy.

Sooo... Did Dany just forget about her two other children she locked in a dungeon for something their big brother did? It's unclear when (and if) she intends to return to Meereen to retrieve them, since we've just about reached the end of her storyline in George R.R. Martin's published books. (Book spoilers ahead!)

In Dany's final chapter in A Dance With Dragons , she's too busy being captured by Khal Jhaqo to worry about those she left behind. (Unable to steer Drogon, Dany was taken by her dragon to the Great Dothraki Sea, where she encountered Jhaqo, a former ko of Khal Drogo's who formed his own khalasar after Drogo's death.) If Dany isn't returning for Rhaegal and Viserion anytime soon, are they simply doomed to rot in that cage? Not quite. In the books, they're eventually set free after Quentyn Martell breaks into their dungeon in a misguided attempt to tame them. (Now, you may have noticed that there's not actually a character named Quentyn on the show. If so, congratulations on paying attention.)

In the books, Quentyn is the older brother of Trystane, who's dispatched by their father to find and woo Daenerys based on an old marriage pact between the Martells and the Targaryens. He spends the entirety of Dragons traveling to meet her — and arrives the day after she marries Hizdahr zo Loraz. Great timing, dude. Not wishing to return to Dorne empty-handed, Quentyn decides to claim one of Dany's remaining dragons for his own, citing some diluted Targaryen blood in his lineage as proof that he can be a dragonrider. Of course, this plan goes about as well as expected, and Quentyn ends up extra crispy and dies a prolonged and very painful death.

Rhaegal and Viserion both escape during Quentyn's disastrous attempt — but since the elder Martell brother has been cut out of Thrones completely, it's a mystery how (and if) the dragons will get out of that dungeon on the show. Perhaps Tyrion will set them free, hoping that whatever psychic link called Drogon to Daenerys in her time of need will also lead them back to their missing queen. Or, if showrunners David Benioff & D.B. Weiss want to adapt Quentyn's storyline with a different character, I can think of a couple of candidates primed to step into his shoes.

There's someone already in Meereen who was upset by Dany's marriage to Hizdahr, who just might be brash enough to try to release Dany's dragons, and whose fate in the books is ambiguous at the end of Dragons. I'm speaking, of course, of Daario Naharis. In the book, his character is held ransom by the invading armies of Yunkai, who refuse to release their prisoners until Dany's remaining two dragons are executed. Rhaegal and Viserion being set loose puts Daario in mortal danger, so perhaps the show will create a narrative shortcut by having Dany's lover be the one to set them free and perish.

If Daario doesn't go down in flames, there's another man loyal to the Khaleesi who would surely volunteer his services. Ser Jorah finally seemed to win his way back into Dany's good graces — taking out the Harpy who was sneaking up to assassinate her — just in time to watch her fly away on Drogon's back. Knowing that his time is limited thanks to his greyscale, perhaps he'll volunteer to be the one to venture into the dragons' den, accepting readily that it might mean his own death. Either way, I can't wait to see what happens.