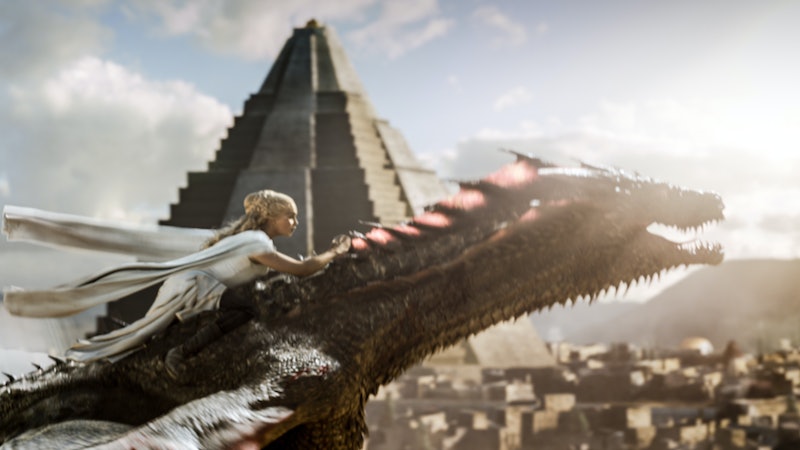 The final scene of last week's episode of Game Of Thrones may have been a triumphant one for Daenerys Targaryen — but it was also an uncertain one. She appeared to happily leave Meereen and everyone in it behind, not even looking in the rearview mirror as she and Drogon flew away for parts unknown. For those viewers (and readers) who feel she's wasted too much time in this foreign city already, it was likely a welcome sight. But, it's not like she can invade Westeros with one dragon and no army. So, what's her plan? What's next for Daenerys after she flies off on her dragon? Fortunately, Dany's last Game of Thrones book chapter can give us some clues.

That final un-adapted chapter in George R.R. Martin's A Dance With Dragons hints at how Dany may bolster the ranks of her army now that the Sons of the Harpy have killed so many of her Unsullied... which is great, because she's gonna need all the help she can get if she plans on conquering the Seven Kingdoms anytime in the near future.

The chapter opens with Dany alone in the vastness of the Great Dothraki Sea. Unable to steer Drogon, he took her to the lair where he's been hiding out ever since devouring the shepherd's daughter. Dany names this rocky hill in the middle of the grass sea "Dragonstone," after her own birthplace. She survives for a time eating bugs and drinking from a stream, but she eventually decides that if Drogon refuses to take her, she has to make her own way back to Meereen.

She spends days following a tiny river, growing weaker, getting sick, and suffering hallucinations of Ser Jorah, her dead brother Viserys, and Quaithe (the masked woman who gave her cryptic advice in Season 2). Eventually she spies a lone Dothraki scout, although he doesn't see her. Drogon then comes flying up and proceeds to eat the horse. The chapter ends with Dany and Drogon standing over the bloody carcass of the animal as an entire khalasar approaches them.

The leader of this particular khalasar happens to be Khal Jhaqo, who was one of Drogo's lieutenants before his death. This puts Dany is a precarious position, since a Khaleesi is always supposed to go live with the crones of the Dosh Khaleen after her Khal's death. Dany only avoided that fate because she had Ser Jorah to protect her. The questions that linger as A Dance With Dragons draws to a close are... Does Dany have enough control over Drogon to help protect her from this Khal? Or will she be taken captive by Jhaqo? If it's the latter, what will happen to her? If it's the former, will the Dothraki be awed enough by Drogon to become Dany's loyal followers once more?

Dany's storyline on the show will likely end on a similarly ambiguous note. All the previous seasons of Thrones have seen Dany's storyline climax on definitive notes of either triumph (the birth of her dragons, freeing the slaves of Yunkai) or despair (chaining Rhaegal and Viserion in a dungeon). Given that this finale will be the first time that neither book-readers nor casual show fans have any idea what's coming next, it's fitting that Dany's Season 5 storyline should reflect that uncertainty.