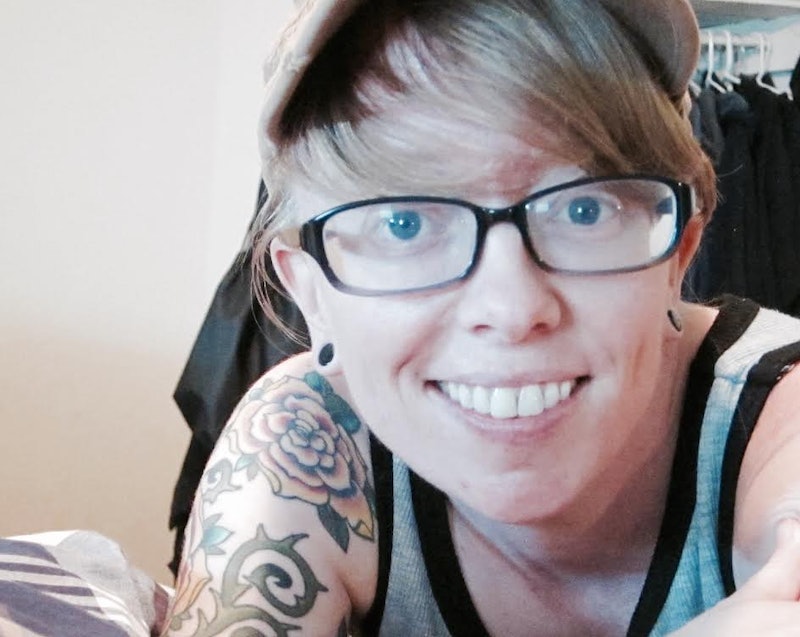 I grew up in an Indiana town, with a good-lookin' mama who always was around. Seriously. She was everywhere. And she got into everything, which made my life difficult, seeing as how I had a lot to hide.

Like my own breasts. I was 13, in the seventh grade, and built like a pubescent boy with extraneous, full breasts. Skinny arms, skinny legs, no hips, no hour-glass physique; yet, for some ungodly reason, I had B cups that were threatening to turn into Cs. They embarrassed me. I kept them hidden under layers of shirts.

While I didn't want anyone else to see my body, sometimes, I’d sneak peeks at my friends' bodies. This once caused me to linger a little too long in the girls' locker room after swim class. My mom's voice came booming from the other side of the door: What was taking me so long? Hadn’t I dressed yet? What was I doing?

There was suspicion in her voice.

Why aren't I dressed yet? I thought.

At home, my mother would loom. I’d be drawing a picture or writing a short story and up she would come from behind, silent like a ninja in denim. When she’d ask to see what I was doing, I’d slap my whole upper body over my work so fast that I often wound up ruining it.

On occasion, I’d surprise both my mom and myself by coming home excitable and all-too-happy to chat after school. I’d get to talking about what I'd done that day. And, more importantly, about what a particular classmate of mine, Georgia, had done. "Georgia gave a presentation in class," I'd say. Or "Georgia told me she likes disco music. Isn't that weird?" I once contemplated aloud about whether or not I should give Georgia a teddy bear as a present. "As a token of our friendship," I said to mom.

I think it occurred to my mother that I was in the throes of a girl crush before it actually occurred to me. As far as I was concerned, I had a friend at school named Georgia. And when I got home from school, I thought about her a lot. I couldn't wait until I got to see her again the next day at school. Unless it was the weekend; then I was downright melancholy.

One cold January morning, as I walked up the steps to school, my bundled arms wrapped tight across my chest to diminish the presence of my boobs, I saw Georgia getting off her bus. Little tufts of steam emanated from her lips as she talked to a nearby friend. When she looked over and saw me, she smiled. And it finally occurred to me: I wanted to kiss her.

I stood there perplexed for about a minute, surprised by my urge. Where had that come from? I wondered.

I made my way into the school bathroom where I shut myself in a stall and tried to mitigate the situation with my own 13-year-old version of psychoanalysis. What I’m feeling right now is probably sleep deprivation, I told myself.

True, I hadn’t slept well the night before. But that was because I’d been up thinking about Georgia.

Uncertain of what to do next, I decided to pee.

The confusion I felt in the wake of my sexual discovery soon turned to fear — a fear that was rooted deep in my family’s faith. I’d been raised Baptist. In the middle of the batter-fried Bible Belt, no less. As far as my parents’ acceptance of my possible lesbianism was concerned — and I would never have dreamt of saying it in such terms. “Lesbianism." So sinister-sounding, with such a strange diagnostic appeal, like botulism — there would be no “acceptance.” Period.

While I would have rather eradicated everything I'd learned at church — about how sinful homosexuality was, about how God had burned down the cities of Sodom and Gomorrah because of the citizens' disgraceful behavior — I took the opposite approach and tried to rid myself of my crush on Georgia instead. I asked out so many boys at school that I was starting to get a “reputation.” Which was fine by me. At least it wasn't a gay one.

Still, at night, I would lie awake and toss the word “lesbian” around in my brain like a depressed child tossing a baseball against a wall. I had no one with whom I could share my thoughts. It did help to learn that, apparently, lesbians were as old as dirt. I'd done some research at the library. They had roamed the earth long before Jesus came along. Maybe not as far back as the Late Pleistocene era, when the neanderthals were alive, but they were part of ancient Greek mythology.

And, who knows, maybe lesbian neanderthals did exist at one point.

There was something else I learned about homosexuality: it was considered "sexual deviancy.” I didn't learn this at the library though; I read it in a Christian girls' magazine I'd been given a subscription to. Every month, the magazine featured a Q&A session with the editor, whose name was Ellen. Girls would ask Ellen about various "teenager issues" that also pertained to faith. One girl wrote in wondering if it was OK for her to be listening to the band Collective Soul. Ellen’s response was something like, “While the band has alluded to spirituality in their music, the members have never outright announced their faith. So I say it’s best to steer clear of their music altogether.”

Another girl wrote in looking for advice about a good friend who’d told her he was gay. She wondered if she should she still be his friend. Or should she keep her distance and just pray for him?

Ellen’s response had been a long and condescending one. I skimmed it, too afraid to read in depth; I didn’t want to risk finding similarities between this girl’s gay friend and myself. But right there in the middle of Ellen’s verbose on-page diatribe was the term: “sexual deviancy.”

I looked it up at the library a few days later:

Sexual deviancy consists of behaviors by individuals who seek out sexual/erotic gratification through means and/or mediums that are considered odd, different, or unacceptable to other persons in the individual's community. See also paraphelias; see also sexual disorders; see also unusual sexual fantasies.

Now I was scared.

One night, while again tossing the word “lesbian” around in my brain, it occurred to me that I should write a letter to Ellen. I knew that she wasn’t going to respond to me with any modicum of approval, congratulating me on my precocious self-discovery. Really I just wanted to share my thoughts with someone. They’d been cooped up inside my head for so long that they'd started to multiply into myriad other thoughts — fearful ones, angry ones, lonesome ones. Like little amoebas of sexual discombobulation.

I got out my stationery, a little pink hard-stock card with my name embossed on the cover, and I sat down at my desk to write:

There’s this girl at school. I like her the way I should be liking boys. I think this means I’m a lesbian. I can’t tell my mom. She'd be really upset. I’m not sure what to do next.

I stuck the card in a purple envelope and hid it in an old picture book. I planned to mail it the first chance I got.

Of course, my mother found the card. That's me and Mom above. To this day, I’m not sure how. Perhaps she'd been watching me. All I know is that I’d gone to a day-long soccer camp and, when I came home, the card was missing from the picture book. My heart started beating like it was trying to escape my chest and run for cover.

The fight that ensued between my mom and I was one of our most epic. First, she "put her foot down." I was by no means going to be a lesbian, she declared. Then my soccer cleats whizzed by my face. So I knocked over a chair in my room and broke the handle off a hairbrush.

The rest of that day is a blur.

But as bad as that fight had been, and despite the grudge I secretly held against her for the subsequent decade I spent in the closet, I came out to my mom again in my mid-twenties. And she was OK with it. She wasn’t overjoyed. But she didn't "put her foot down" this time either. In fact, she'd crossed her legs, folded her hands, and asked me quietly to "go on, please." So I told her about the girl I was dating.

Now I'm in my thirties. My good-lookin' mama still lives in the same old Indiana town. I, however, live in Baltimore. But in spite of this distance, she and I have grown closer. I think this is partially because she's watched society evolve around her and, instead of trying to fight it, she's tried to make peace with it. In turn, I've watched her evolve from the steely, scared Baptist woman she once was to the pleasantly Lutheran mother she is today.

One who, having learned about the Supreme Court's ruling in the Obergefell vs. Hodges case, texted me to say: "Same sex marriage legalized! Great! :)"

More like this
Why You're Seeing Green Bandanas At Abortion Rights Protests
By Lexi Inks
GIRLI & Q Fell In Love At A Skatepark & Never Looked Back
By Jessica Morgan
How To Come Out Online, According To Trevi Moran
By Melanie Mignucci
Are Cancer & Cancer Compatible In A Relationship?
By Kristine Fellizar
Get Even More From Bustle — Sign Up For The Newsletter