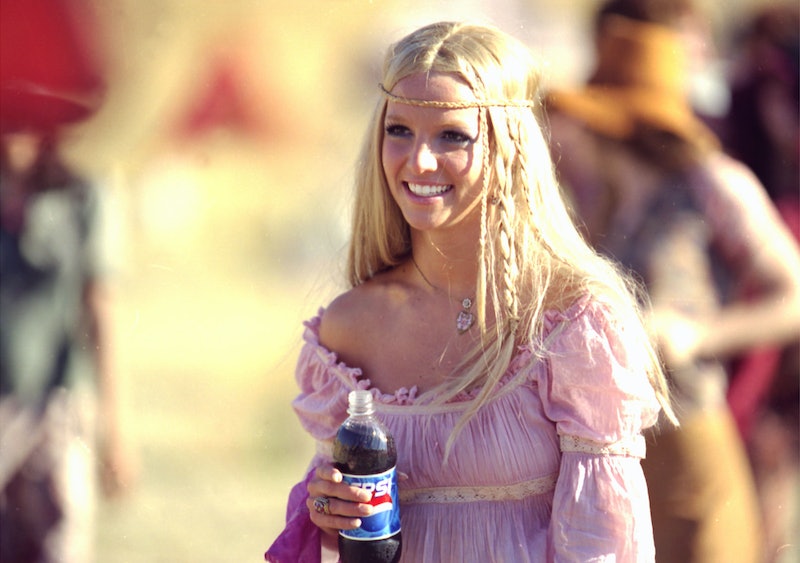 If there's one thing that brands love to do, it's use celebrities to peddle their products. And hell, if I were famous, I'd be snapping up endorsement deals left and right, because what's wrong with a little extra income? Even though celebs still sling products left and right, I have to say, the glory days of celebrity endorsements were definitely at the dawn of the new millennium, and the queen of the endorsement deal was none other than Britney Spears.

This was during a time when girl groups and boy bands and pop stars of all walks of life attached their names, faces, and midriffs to various products so kids would know to spend their weekly allowances to get their grubby little paws on them — my grubby little paws included.

The early aughts were a good time for Spears' wallet and for all of the products that she endorsed. After all, who wouldn't want to buy what Britney Spears was selling? They were good, American brands, and now they had the good, American Princess of Pop attached to them.

Here are six products you might have forgotten that Britney wanted you to buy back in the day.

IT'S THE "S." Or, it was... Now, the brand associated with Shape-Ups, Skechers used to be the number one shoe-brand for the sexy, young pop stars of the day, Britney Spears included. Their whole aesthetic really went with her "...Baby One More Time" schoolgirl music video vibe. I wonder if she gets free Shape-Ups for life?

Specifically, the Polaroid i-Zone in 2000. Remember how cool those tiny pictures looked on the cover of your three-ring binder?

RIP to "Got Milk?" the uncomfortably sexy dairy ad campaign of our time. Brit Brit became the 100th celeb to drink the cow juice in 2000.

Britney Spears, who once wore the best sheer lavender sunglasses ever, once had her own line of glasses.

We will never fully understand each other, if you didn't hurt yourself trying to emulate Britney's chair-dance from the "Stronger" music video. Brit Brit was the dance QUEEN of her time, and she released a game called Britney's Dance Beat in 2002 for the PS2, and oddly enough, it was not a game that you actually did any dancing for.

If you didn't wear at least one Britney Spears perfume during middle school to woo dudes at the ice cream social, did you really even exist? As of 2015, Britney has released a total of 17 fragrances, but it all started with her first scent with Elizabeth Arden, "Curious," in 2004. For the perfume, she released this steamy commercial that looks like it was the source inspiration for ALL of Lana Del Rey's music videos. Do you dare?

For those who think young, or for those who think that whatever Britney is drinking, you should be drinking. Sure, there's absolutely no way to forget Britney as a spokeswoman for Pepsi, and that instantly iconic Super Bowl ad, but do you remember this literally EPIC triple-threat ad with Pink, Beyoncé, and Britney in a colosseum?! Damn, they don't make 'em like they used to.

Now, go grab a Pepsi and scour the Internet for "vintage" i-Zones. Go!

More like this
Prince William Reveals Charlotte's Hidden Talent In Ultimate Proud Dad Moment
By El Hunt
Alicia Silverstone Has Recreated An Iconic 'Clueless' Scene
By Frances Stewart
The 'Hocus Pocus' Sequel Finally Has A Release Date & It Makes Total Sense
By Shannon Barbour and Radhika Menon
“The Door Is Always Open” For Another 'Breaking Bad' Spin-Off, Says AMC Boss
By El Hunt
Get Even More From Bustle — Sign Up For The Newsletter