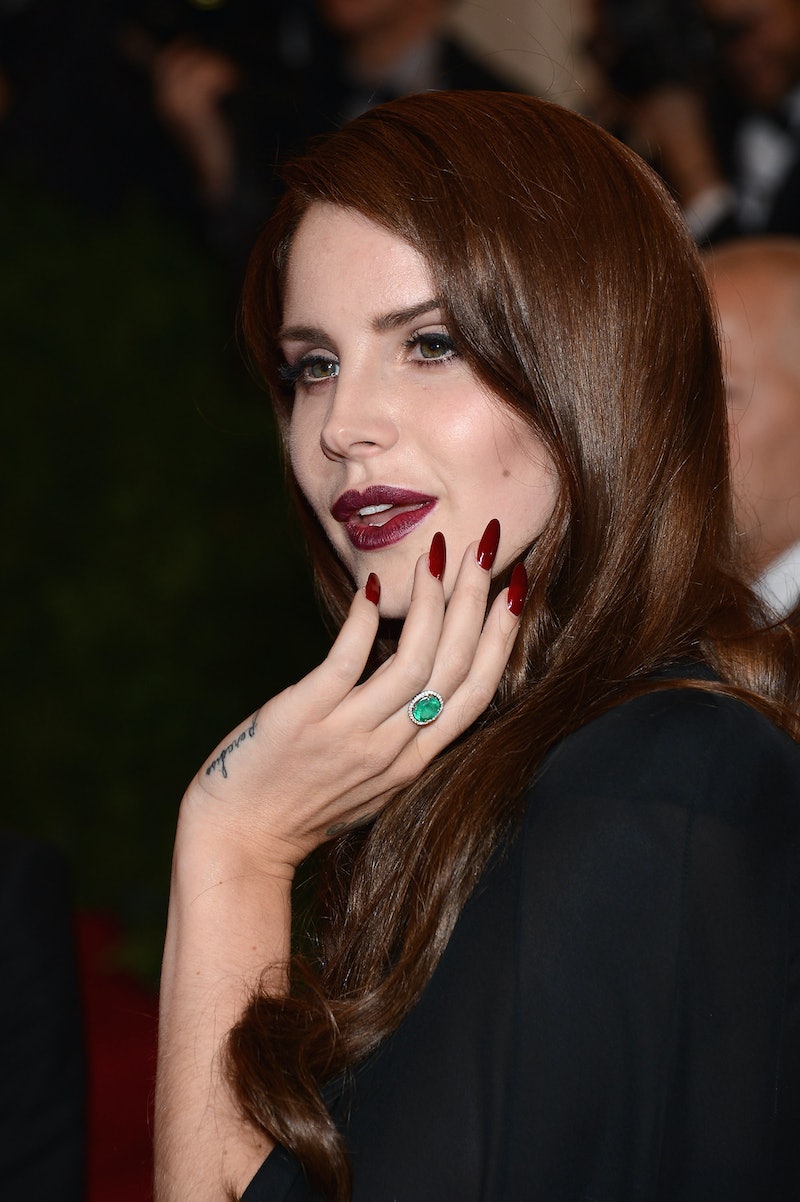 There's so many things to love about Lana Del Rey, it's hard to list all of them in a cohesive manner. A fiery, complicated vixen, Lana Del Rey is equal parts pop star, folk singer, rock star, and somber vocalist. I love her so much that I find myself constantly searching for more music like hers (largely because the wait for her Honeymoon album is literally killing me). Turns out, though, there are a ton of artists Lana Del Rey fans should listen to — so, if, like me, you're desperate for more things in the realm of highly emotional, super-stylized, female-centric music, then I believe I have some recommendations you need to check out ASAP.

Don't get me wrong — I like lighter, fluffier pop music, too. It's not all raindrops and broken relationships, after all. Sometimes, though, you just need to hear a passionate, badass woman ripping into dark themes and heavy emotions; and, if the lead singer has issues with narcissism, that's even better! You know the kind of music I'm talking about. They're the Alanis Morissettes and Ani DiFrancos of the world: unique artists with non-traditional singing voices that know how to rip out their hearts and put them on display during every song they sing.

Here is a list of female-led bands that fall into that wonderfully cathartic genre. These lovely ladies will just have to get us by until Del Rey finally releases Honeymoon.

If you like Lana Del Rey for her love of tragic imagery and disregard for traditional relationship models, then you will love Marina & The Diamonds, which is the moniker under which Marina Diamandis performs. Judging especially from her early lyrics, Diamandis loves to have fun, wreck homes, and play with men's hearts — it's awesome.

Alvvays is probably the most subdued band on this list, but no less important to check out — the way they combine subtly addictive music with lyrics that probe the millennial psyche is just brilliant. Plus, they occasionally sing about student loans, so I love it.

First of all, the title of her album — Bury Me At Makeout Creek — is a Milhouse quote from The Simpsons, so that alone makes me love her. More importantly, however, Mitski is cranking out some of the most emotionally raw and melodic lady-centric grunge music I've ever heard. If you think you don't like modern grunge, you probably haven't heard Mitski.

Portishead is an oldie, but a goodie. Frankly, Lana Del Rey is scratching basically the same itch that Portishead dug their nails into so long ago. Do you like epically sad lyrics from a distinct female vocalist with an eerie, noir-esque musical backdrop? Trust me, you will like Portishead.

Neko Case — so wise, so insightful, so on top of expressing all of my deepest thoughts and emotions.

Amanda Palmer is a divisive figure, for sure. Often pretty dramatic, she's the sort of artist you either love or hate. All that aside, though, the first album from The Dresden Dolls was fantastic. Sure, it's a little silly with its rawness, but it's also cabaret punk meets early Alanis Morissette — and that's a very good thing.

Like Lana Del Rey, Got A Girl is very much into referencing ages past. Where Del Rey looks to American iconography and classic cinema for inspiration, Got A Girl uses French '60s pop and psychedelia to craft their sound. Their album, I Love You But I Must Drive Off This Cliff Now, is a super classy, stylized endeavor that harkens back to British spy movies and beach-blanket rom coms. Unlike Del Rey, the style is more fun than weighty, but that's not necessarily a bad thing. Plus, the lead singer is actress Mary Elizabeth Winstead!

More like this
Long Live Bennifer!
By Allie Jones
Why The '365 Days' Sex Scenes Are Good, Even If The Movies Aren’t
By Arya Roshanian
Doja Cat Needed Tonsil Surgery & Now She Can't Eat Taco Bell's Mexican Pizza
By Jake Viswanath
Britney Spears Thanks Fans After Miscarriage & Explains Why She's Writing A Book
By Jake Viswanath
Get Even More From Bustle — Sign Up For The Newsletter