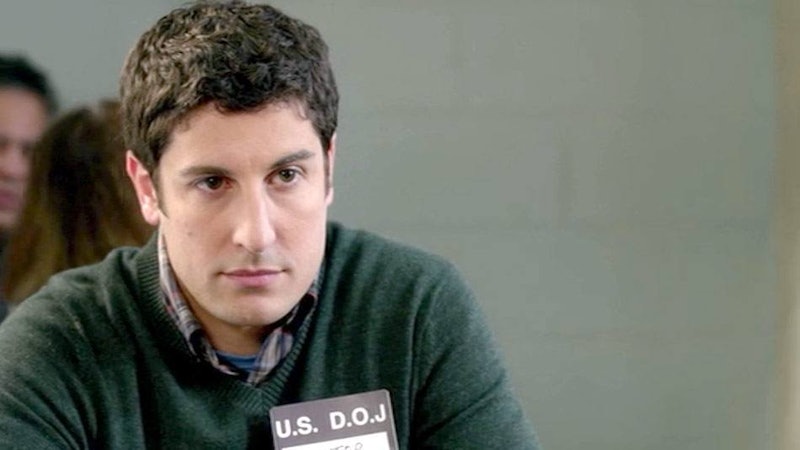 Out of everyone on Orange Is The New Black, I miss Larry the least. Oh, Larry, how I love to hate you. But not you, Jason Biggs. I actually love you. Larry, though, not so much. This is why it is perfectly fine that Larry isn't in Season 3 of Orange is the New Black. He's gone for the season, but does this mean Jason Biggs is gone for good? As much as I'd love to see him return to the show, I don't necessarily want to see Larry. Sorry, not sorry, Larry. Larry was introduced as Piper Chapman's fiancé, who was willing to muster through their relationship all alone — since you know, Piper's in jail. At first it was sweet, because clearly their love knew no boundaries, including love separated by bars. He played a big role in the first season as we saw him adapt to his new life without Piper. However, come season 2, he wasn't really sold on the idea of waiting for Piper anymore. Cut to, Larry starting up an affair with Piper's best friend on the outside, Polly. Oh, also Polly's married and literally just had a baby. Nice job, Larry. The two of them come clean to Piper about their new love, and needless to say it doesn't go well. For some reason, I don't find Polly at fault for this. It's all Larry's fault because he's the worst. So no, I can't admit that I was sad to see him leave Piper's life. She deserves way better than him.

By the end of Season 2, it really felt like Larry's story had run its course. That's why, it wasn't a big surprise when Biggs confirmed that he wouldn't be a part of Season 3 (and I can confirm all of that, too, since I've finished my binge).

The New York Daily News confirmed his absence earlier this year, when Biggs explained, “[The show's] not focusing on Larry at the moment. Larry will not be in season three."

Still, perfectly fine by us. Last season it did always seem weird whenever the action would cut away from Litchfield, to find Larry and Piper's brother, Cal, sitting out in the woods. The action's not there. The action's in prison.

While you might be celebrating a Larry-free Season 3, there's always the possibility that he could return later on down the road. Biggs also told The New York Daily News that, "there’s always a possibility he can come back." I, for one, wouldn't be surprised at all if we see him pop up later on down the road, if only because he has so much history with Piper already. But, hopefully it's a quick little pop in. I don't need that much Larry.

Biggs, you can still come back whenever you want. You're always welcome. Larry though... ehh, we'll see how we feel come Season 4.