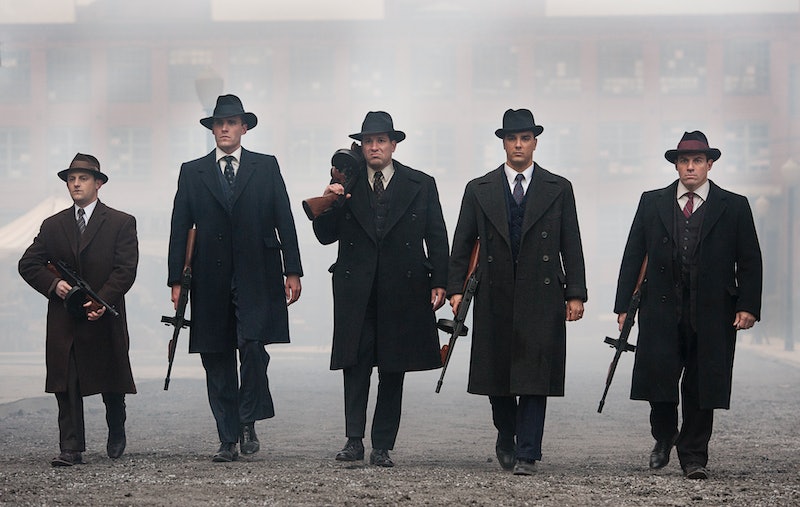 It's not a written law or anything, but there must be some sort of unspoken agreement that a TV show about the mob always has to be on the air. When The Sopranos ended, Boardwalk Empire was there to pick up the slack. And, now that Boardwalk Empire is done, there's AMC's The Making of the Mob: New York, which covers some of the exact same characters, including Meyer Lansky and Lucky Luciano. The big difference, though, is that The Making of the Mob is much more true-to-life than Boardwalk Empire — it's closer to a documentary, but with actor reenactments. As is the case for any documentary, the voiceover narration is important. So, who narrates AMC's The Making of The Mob ?

It's a risky strategy to have any kind of narrator at all. I'm not sure if I like this half-documentary, half-drama as much as I would have if the network had just gone ahead and made a regular, narrative TV series following the real story of the creation of the mafia. So, the narrator here is super-important: A bad one could sink the whole thing and make me re-watch old Boardwalk episodes instead. Thankfully, the series has Ray Liotta as its voice. Here's what you need to know about him.

The easiest way to get mob-movie fans on your side: evoke Goodfellas. That movie is awesome. In it, Liotta plays Henry Hill, who's basically the audience's entry into the whole glamorous world of the mob, and he explains his journey through his voiceover. So if The Making of the Mob was looking to steal from another great mob movie, it took from one of the best

That's Not The Only Goodfellas Connection

In another shrewd move to draw in mob-movie devotees, AMC is going to be showing the best mobster movies as a lead-in to every new episode of The Making of the Mob. Its first one, which will air on June 15? Goodfellas, obviously. You can seamlessly watch one straight into the other without switching narrators.

Liotta Has Lent His Voice Before

Perhaps it was in demand because of Goodfellas, or perhaps he just has a melodious voice, but Liotta has done a bunch of voiceover work. You can hear him in Family Guy, Bee Movie, Spongebob Squarepants, Grand Theft Auto: Vice City, and other animated projects. Usually, he still plays some sort of gangster. Or prisoner — he sang too, in Muppets Most Wanted.

This Isn't His Only Historical Show Right Now

Liotta is in New York in the 1930s on one channel, and Texas in the 1830s on another. He's co-starring (along with, like, every other male actor ever) in History channel's Texas Rising. Under a big, bushy white beard, Liotta plays Lorca, an Alamo survivor obsessed with revenge. Even though the show is based in real-life history, it isn't a "docu-series" like The Making of the Mob, and Lorca doesn't have a real-life counterpart.

He'll Be A Cop Next

Liotta is trying a different role in the cop/criminal dynamic for his next show — or is he? He was cast in NBC's Shades of Blue, a 13-episode series in which Jennifer Lopez plays a woman who goes undercover to investigate a bunch of dirty cops, then starts to feel bad about it. Liotta is Lieutenant Bill Wozniak, and it's unclear right now whether or not he's one of the dirty cops, but come on, Liotta is too good at playing bad guys to switch sides now.