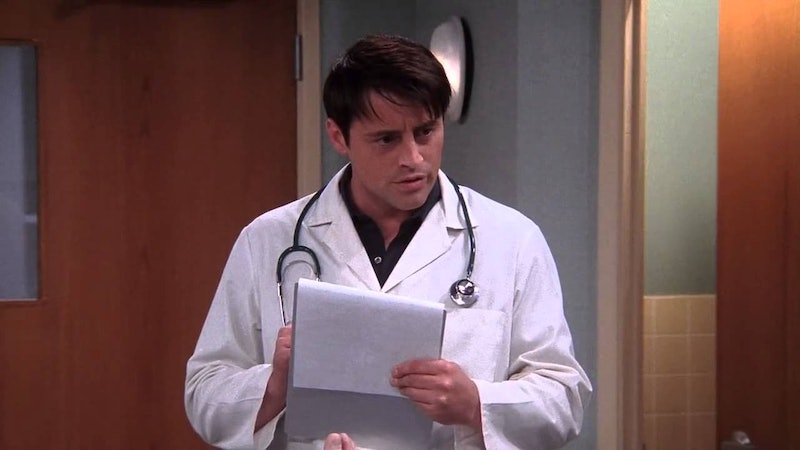 Of everyone in the main gang on Friends , Joey Tribbiani was always the biggest dreamer. He refused to give up his acting aspirations (for long, anyway), in spite of the constant rejection and humiliation he experienced at the hands of the industry. That's indirectly what working actors sign up for anyway; hence their egos of steel. But along with Joey's failures came his triumphs — those triumphs being any occasion when someone payed him to pretend to be someone else. All told, the thespian had quite a varied career on both stage and screen. Recognize.

I don't think Joey got enough credit for his tenacity, or for his determination to use all of Chandler's money if he had to, in order to make it. He threw himself into every job he got, even if it required him to embarrass himself. (And his friends, usually.) From butt-doubling to soap opera superstardom, the actor approached each rung on his career ladder with gusto and open-hearted commitment. So today, I want to honor his unfailing optimism with a recap of Joey Tribbiani's most memorable and influential acting roles. Remember that there are no small parts — only small actors. And for as long as Joey's Friday tradition continued ("Two pizzas!"), my soulmate in food appreciation was never that.

Joey starred as a detective with a robot partner — or a Computerized Humanoid Electronically Enhanced Secret Enforcer, if you will — in this flop television series. His friends couldn't even bring themselves to give him their opinions, opting instead to comment at length on the show's lighting or, in Phoebe's case, to distract him with some boob contact.

OK, so Joey was technically sacked from this job for what I'll call "creative differences." (The director didn't understand his choice of portraying this butt's "quiet desperation.") But he did get within one degree of his ultimate acting hero, and only Joey's own mother will be able to tell that those buns aren't actually his.

Newbie Rachel's first experience in the trying times of supporting Joey Tribbiani was at this Off-Off-Off-Off-Even-Further-Off-Broadway musical, wherein Joey portrayed a musical version of the first psychoanalyst. Matt LeBlanc recently proved that a role that unique never leaves you when he performed Freud's big number on The Graham Norton Show.

Lots of drama happened behind the scenes at this play; Joey fell in love with his co-star Kate, who happened to be dating the show's artistically tortured director. Kate eventually chose Joey, but then moved to L.A. for a job. He said goodbye to her in character on the show's closing night, as Victor climbed aboard his spaceship to seek out alternative fuel sources on Blargon 7.

Joey may not have been especially proud of this one, but his work as a put-upon milk drinker in this corny infomercial brought more joy to his friends than any of his more prestigious jobs.

2. Private Tony In Over There

Joey learned an important lesson about the side effects of proper enunciation from seasoned co-star Richard Crosby (Gary Oldman) when filming this war drama. The result isn't tremendously exciting — Chandler falls dead asleep in the middle of the film's premiere. But his costume at least remains an important part of Friends history; Joey officiated Monica and Chandler's wedding while still in Private Tony's uniform.

1. Dr. Drake Ramoray In Days Of Our Lives

Was there any question? Drake Ramoray is Joey Tribbiani's calling card. It was his big break, and a role he returned to in later seasons after the writers got over his accidental dis in Soap Opera Digest. Without Drake, there wouldn't be a name for "smell-the-fart" acting, a technique I've seen employed in many a melodrama.

Way to keep on trying, Joey! You're an inspiration to struggling actors everywhere.