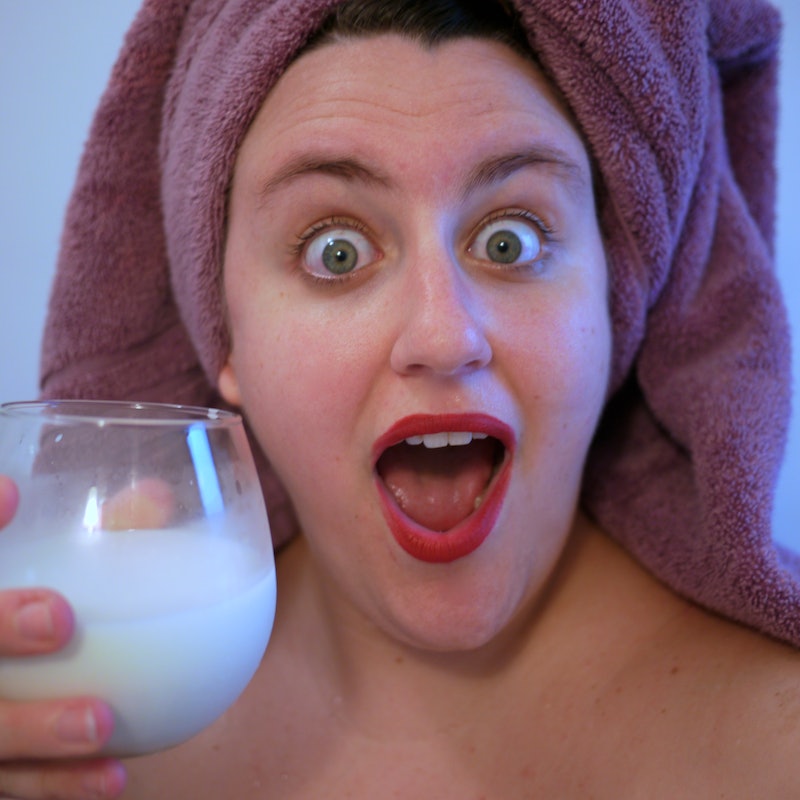 When I was approached by ethereal body positive queen & Bustle editor Marie Southard Ospina, to do a "gross experimental beauty story," I agreed without blinking an eye. Flash forward a few days, and suddenly, I was standing in my shower, shivering like a frightened baby calf in a rainstorm, bathing in milk.

Of course, my fate could have been a lot worse. In fact, my initial idea for a gross beauty experiment may have been slightly more extreme than what my editor had in mind: When I agreed to experiment within the dark underworld of unconventional beauty practices, I thought it might mean that I would have to bathe in semen or brush my teeth with dirt. While I would have been down to do so (I am nothing if not courageous), my assignment turned out to be much more benign.

The thing about bathing in milk is, it's not actually that gross. In fact, women have been doing it for centuries. Before I get to the part where I'm shrieking and carrying on in my shower with a half gallon of Borden's whole milk in my hands, let's take a moment to learn a little more about the ancient practice of soaking yourself in lactic liquid. Turns out, there's a lot more to it than meets the udder.

Milkin' It In Ancient Egypt

Cleopatra is remembered for her unique aesthetic and beauty, particularly for her radiant skin. Legend has it that she kept her skin looking soft and glowy by bathing in donkey milk. In fact, I remember reading in my elementary school history books that good old Cleo required the milk of 700 lactating donkeys to satisfy her daily bathing regimen. I also remember my fifth grade self laughing endlessly at the phrase "700 lactating donkeys."

The Romans Bathed In It, Too

Roman Emperor Nero's second wife Poppaea Sabina also bathed in donkey's milk. According to historians, she believed that donkey's milk cured disease and preserved the fairness of her skin. However, I like to think that Poppaea simply claimed that donkey's milk was medicinal so she'd have an excuse to sit in a warm, creamy bath and contemplate the fact that she was married to an elderly man who staged the suicide of his own mother, otherwise known as Roman Empire Me Time.

Additionally, Emperor Claudius' wife Valeria Messalina used to soak slices of bread in milk and turn them into face masks, because empresses are nothing if not resourceful.

Europeans Bathed In Milk But Were Kind Of Jerks About It

One famous example of an avid European milk fan was Pauline Bonaparte, Napoleon's sister. Assholery apparently ran in the family, because Pauline used to anger people by taking elaborate donkey's milk baths, even though milk was scarce at the time.

In the 1600s, wealthy Europeans used to bathe in milk and then sell it to the lower classes for sustenance, because drinking another man's bathing milk was just another one of the many confusing aspects of living during the Age of Enlightenment.

We, Too, Can Bathe In Milk

Today, science has taught us that milk contains a ton of lactic acid, which falls under the umbrella of alpha-hydroxy acids (AHA). The acids of milk are said to penetrate the top layers of our skin and stimulate new cell growth. The fat in the milk leaves our skin feeling soft and supple as well. So, what's bathing in milk actually like, and does it really work? I took it upon myself to find out.

As much as I love my readers, I simply couldn't bring them with me into the sacred chapel that is my shower. So, I'll give you a basic idea of what it was like to bathe with milk via GIFs. Here's what the initial milking was like. Keep in mind that the milk was freezing cold because I forgot to take it out of the refrigerator beforehand. Also keep in mind that the dog watched me take these photos and was confused.

As you can see, the experience was quite jarring. If you're going to try this at home, I would recommend warming the milk ahead of time, or just leaving it out of the fridge before use. I chose whole milk, because I wanted to get the maximum milk fat benefits, and because the greyish color of skim milk genuinely frightens me.

Right after I poured the milk on, my skin felt super good. I decided to do a second round of pouring, this time trying to get a more comprehensive coating of the good stuff.

Clearly, this time around was slightly more enjoyable for me — but still very, very cold. The look on my face at this particular second really sums up my emotional response to the entire situation:

It was at this point that I realized that my mane of thick hair might be receiving a bit too much milk, and that it might not be the best thing for my tresses in terms of grease level. I would learn later that I was right: Even after shampooing, my hair still remained slightly greasy. It's like momma always taught us: Don't wash your hair in pasteurized milk fat. For the remainder of the milk bathing experience, I tried to focus on my skin. It was simply delightful.

After pouring the milk all over my body, I rubbed it in with a loofah in the same way I would with body wash. You will not be treated to a GIF of that part, because quite honestly it might be too sensual for you to handle. Here's where some questionable moment arose: After I was done, I couldn't shake the fact that I smelled like, well, milk. I realized that despite a good rinse, the milk residue might remain on my skin, and I would smell weirder and weirder throughout the day. So, I used a light bar of soap and did an additional quick wash, just to prevent stinking like a kindergarten classroom after snack time.

So Does Milk Do Your Actual Body Good?

After I was finished bathing in milk, my skin felt soft and totally moisturized, and honestly, it looked a lot brighter. My hair looked terrible, because life is about balance. My recommendations to anyone who wants to try this out are as follows: