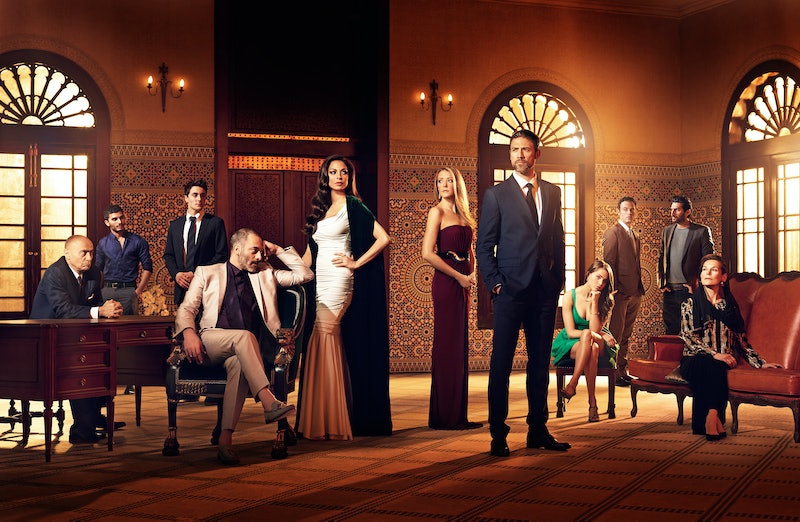 Described by various news outlets — and some of the actors themselves — as " The Godfather in the Middle East," Season 1 of FX's Tyrant attempted the tricky feat of balancing soapy family drama with the complicated politics of its war-torn country. (Abuddin may be fictional, but the region in which it's located is very, very real.) The show's freshman outing, created by Gideon Raff (Homeland) and developed by Howard Gordon (24) and Craig Wright (Lost), was undeniably at its most successful when focused more on the former aspect than the latter, and now it's coming back (somewhat surprisingly) for a second season. Whether you're a returning viewer seeking to brush the cobwebs off your memory, or a new one who wants to dive straight in to Season 2, check out this Season 1 recap before tuning into the Tyrant premiere on June 16.

The first 10 episodes of Tyrant followed the moral decay of Bassam "Barry" Al-Fayeed, the younger son of a dictator who returned to his home country of Abbudin with his wife and children after a prolonged, self-imposed exile in America. The pediatrician found himself quickly embroiled in his family's feuds and squabbles and — when his father suddenly died — he felt compelled to stay and help his old brother, Jamal, rule. But, disagreements between the brothers eventually led to Barry deciding he needed to depose Jamal to rule in his stead. He arranged a coup with the United States government and, even though he claimed to be doing it for the greater good, his wife — and audiences at home — could see how power-hungry Bassam had really become.

So where did the season finale, "Gone Fishing" leave off?

At the top of the hour, Bassam received some devastating news that all but ended his nascent coup before it even began: The United States was withdrawing its support. Bassam had already done such a good job paving the way for the coup by alienating Jamal from his most trusted lieutenants, the U.S. no longer actually needed the coup itself to take place! But, Bassam was too busy breaking bad to pay heed to any warnings, and decided to go ahead without the U.S. government's support.

Thus far, the entire season seemed to be leading towards Bassam becoming the show's titular "tyrant," against his own better instincts. It came as something of a surprise, then, when Barry's coup turned out to be a total disaster. (Although, in retrospect, it really shouldn't have been a shock.) While Bassam took Jamal out fishing, his co-conspirators were supposed to be eliminating the last vestiges of Jamal's inner circle. But, when they returned to dry land, Bassam discovered the tables had been turned: Jamal had already gotten the truth from one of his brother's allies, and he stopped the coup before it even began.

Barry ended the season in a prison cell, with Jamal debating what to do with his disloyal brother. Despite the fact that their mother, Amira, begs Jamal to spare her son's life and simply exile him, Jamal's wife, Leila, convinces him he must show no mercy and execute Bassam.

Barry's unstable brother was by far the most interesting character in Tyrant's first season. Although the writers used a tired shortcut to establish him as a villain — copious violence against women, both physical and sexual — Barhom's performance gave Jamal far more compelling layers... layers which were finally given room to breathe in the season's latter half. His scene on the boat with Bassam was particularly masterful, as Jamal practically begged his brother to admit his desire for the presidency (without ever explicitly saying so, of course). Unfortunately, Barry proved to be too proud, preferring to take it by force than simply be honest with his brother.

As Bassam was being led away to jail following his failed coup, Jamal tearfully told him that he would have gladly given the presidency to him... if he had only asked for it. It's true that Jamal never wanted such immense responsibility. From an early age, Bassam was the natural-born leader, as we learned in effective flashbacks. And when power was thrust upon him so suddenly following the death of his father, he found himself utterly unprepared. But, now, Barry's betrayal has likely turned Jamal into the full-blown tyrant he always feared. In one of the episode's final scenes, we witnessed Jamal executing several of conspirators — including the man who revealed the entire plan to him in the first place.

Jamal's beautiful wife has a history with Bassam (of course): When they were younger, Bassam and Leila were madly in love... although he coldly left her behind along with everyone else when he fled Abbudin for America. A resentful Leila married Jamal instead, despite harboring no love for the dictator-to-be. Refreshingly, Barry's return to his home country didn't send Leila immediately swooning into his arms. Instead, the First Lady of Abbudin showed how much he'd hurt her by hurting him back: After Jamal's mother pled for Bassam's life, Leila — along with Jamal's tyrannical uncle Tariq — is the one who convinced her husband to execute the traitor instead.

Barry's American wife and children were frequently the least compelling presence in any given episode, taking up valuable screen time from the dysfunctional Al-Fayeed family with their sheltered naïveté and general fish-out-of-water uselessness. Molly quickly joined the ranks of "most hated TV wives" alongside such frequently-maligned targets as Breaking Bad's Skyler White, Mad Men's Betty Draper, and The Walking Dead's Lori Grimes. Her constant concerns over her husband's decisions went unheeded; Bassam neglected his wife as much as the writers did.

Daughter Emma was barely even a character — her sole contribution in the entire season was an ill-advised spa day with her aunt (Molly's sister, another unnecessary addition) during the middle of a coup which resulted in Barry's entire family missing the plane and thus getting stranded in Abbudin following his dismal failure. Son Sammy perhaps fared the best out of Barry's family: As a young gay man in a Middle Eastern country, his sexuality caused some interesting tension, even if his flirtation with security officer Abdul hasn't really led anywhere yet.

Kirk has some experience with dysfunctional families, given his eight seasons on Showtime's Weeds... but nothing prepared him for the plotting and backstabbing of the Al-Fayeed clan. As the U.S. ambassador to Abbudin, his character interacted frequently with Bassam, and was a key figure in planning the coup against Jamal. When the plug was eventually pulled by Tucker's boss Lea Exley (24's Leslie Hope), Barry managed to blackmail the diplomat into re-offering his government's support by threatening to expose America's machinations to the New York Times.

After Bassam landed in prison, Tucker was the one who had to break the news to his frantic wife. Will he be able to help Barry avoid execution? Will Tucker's (and America's) role in the attempted coup be exposed? Will Jamal abdicate his un-wanted presidency? Will Sammy and Abdul be found out? Will Emma go on another shopping spree?? Hopefully all these questions and more will be answered in the Season 2 premiere, "Mark Of Cain."