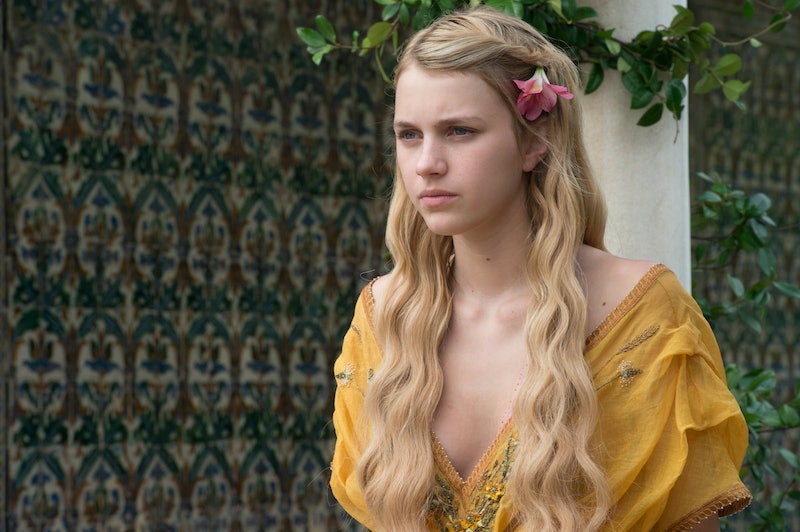 Princess Myrcella Baratheon is a complete show-stopper on the regular, however, her style in the season finale of Game of Thrones was particularly fantastic. From her hair to her dress, Myrcella is basically identical to Disney's Rapunzel. Aside from the whole long golden locks thing, both princesses are such free spirits in their respective worlds. From Myrcella defying her Uncle Jamie's requests to return to Westeros to Rapunzel confronting Mother Gothel, these girls know when to speak their minds.

These girls were both very young when they set out on their individual adventures, which honestly made them way too trusting. For instance, Myrcella is too blinded by love to see that she's in a dangerous situation (ugh, Ellaria), while Rapunzel sets off into the world with a mysterious stranger.

But really, how were they supposed to know better? Between being locked in a tower and sent away to a foreign land, neither of them exactly had stable home lives. It’s amazing that both Myrcella and Rapunzel made it as far as they did in life. While they might are reached different ends, there's no doubt that they both dazzle. Need more proof that Myrcella and Rapunzel are living parallel lives? Here are six reasons.

OK, you had that one down.

Long, luscious blond locks anyone? These two are worthy of some serious hair envy.

Romantic flowing dresses, anyone? Myrcella and Rapunzel both love the brightly colored gowns.

Talk about an understatement. Both of these women could learn a thing or two about parental guidance.

5. Growing Up Away From Home

So, Myrcella wasn't locked away in a tower, but she was shipped off to a foreign land. Either way, these girls had to grow up away from their traditional homes.

Both girls fell in love with suitors that they parents wouldn't willingly choose. While Myrcella was promised to the Prince of Dorne, we all know how livid Cerise was about the choice. As for a Flynn Ryder, thankfully he changed his ways.

More like this
The Trailer For The 'Game Of Thrones' Prequel 'House Of The Dragon' Is Dark AF
By Grace Wehniainen
'Games of Thrones' Fans May Recognise This 'Conversations With Friends' Location
By El Hunt
M.A.C. Is Launching An ’80s-Chic Stranger Things Makeup Collection
By Olivia Rose Ferreiro
The Most Extra Party Girl Beauty Looks From The Early 2000s
By Paris Giles
Get Even More From Bustle — Sign Up For The Newsletter