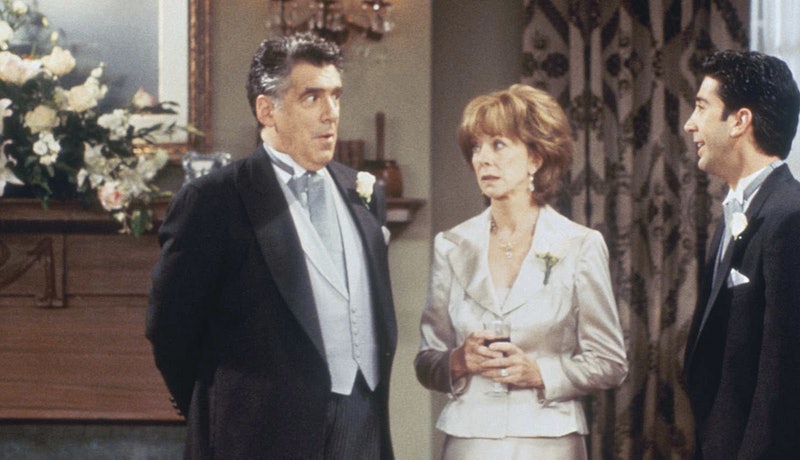 There are so many characters on Friends that are underappreciated by the fandom, but there is no one, I repeat, no one, who is more underrated than Jack and Judy Geller, the two hilarious beings who spawned Monica and Ross. Played by Elliott Gould and Christina Pickles, respectively, this dynamic duo showed us that the Geller apples don't fall far from the tree. All of Ross and Monica's wacky quirks become all the more understandable after two seconds of seeing them with their parents. Jack and Judy Geller were the true Friends stars, and, if you don't believe me, then you probably haven't seen much of Jack and Judy lately.

Judy was the queen of passive aggressive digs and was never one to go easy on her kids. She was throwing mad shade before there was shade to throw and, for that, I salute her. Meanwhile, Jack was the classic dad who always takes it just a bit too far. A TMI enthusiast and all-around hoot, Jack was never slow to embarrass the living daylights out of his children (much to my delight).

This is our first hilarious run-in with Jack and Judy from Season 1. And it did not disappoint.

Because who doesn't want sex advice from their parents, right?

3. Monica's Parents Find Out About Richard

And we get to see a healthy dose of Judy Geller's classic passive aggressive behavior.

4. The Thanksgiving With All The Confessions

This lightning speed round of confessions is one of my absolute favorite Friends moments. "Hurricane Gloria didn't break the porch swing, Monica did!"

The one in which Judy tells a story about Ross' "willy" that none of us needed to hear.

6. Jack Geller Wants To Be Buried At Sea

Buried at sea? Huh. That Jack Geller is just so unpredictable.

Rachel orders a cake shaped like a bunny for Emma's birthday. In an epic accident on the bakery's part, baby Emma ends up with a penis-shaped cake that was clearly intended for a Bachelorette party (or perhaps a 50 Shades viewing party). Jack and Judy take one look at that giant penis cake, and Jack immediately says, "I know what you're thinking, Judy. The resemblance is uncanny." The rest of the gang (including their two children) stare back in horror. But, hey, good for you, Jack and Judy. You keep that spark alive.

8. The Gellers Take On Some British Chippies

The conflict between the Gellers and Emily's parents should have been red flag number 115 that Ross and Emily were destined for failure. But it at least provided us with a good amount of giggles and also gave us the most epic Jack Geller speech of all time — in which ol' Jack gets a sick WWII burn in.

9. Jack & Judy's 18th Birthday Message to Emma Gets a Little Too Real

Jack and Judy give Emma a memorable birthday message from the beyond. Now, don't you wish that your parents were more like Jack and Judy Geller? (You can say "yes." I won't tell anyone.)