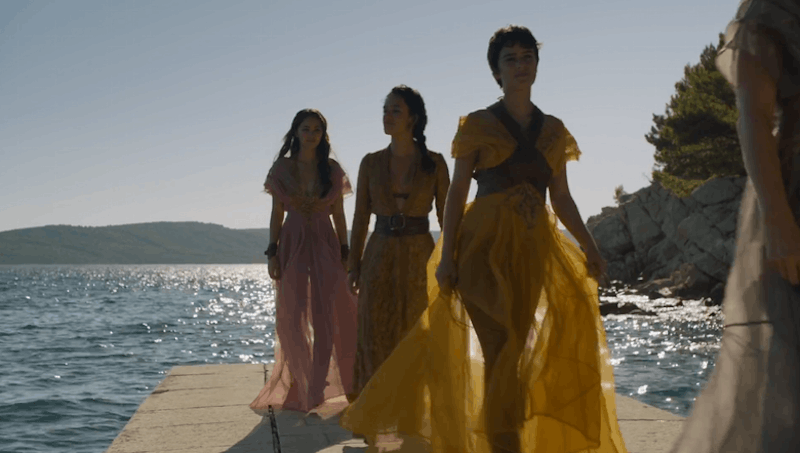 First of all, can you say "SQUAD GOALS?" In last night's ridiculously bloody and major character-killing Game of Thrones finale, Ellaria Sand and the Sand Snakes had their fashion game (not to mention their vengeance game) on lock. Their assassination of Princess Myrcella got a bit lost in the shuffle on the episode, what with Jon Snow's brutally mutinous stabbing, Cersei's just-as-brutal penance, and Brienne of Tarth's execution of shell-of-a-man Stannis Baratheon to contend with — but even with all of the capital-P PLOT going on, Sand Snake fans the world over were happy to see their Dornish plot coming to deathly fruition.

We knew that they weren't just going to sit by in silence (especially when Jessica Henwick called the Sand Snakes' role in the finale "very extreme" in an interview with Yahoo Singapore) — and true to their father's Red Viper roots, they got their revenge with an insidious dose of poison. We've seen them use their weapons of choice throughout the season, but they saved a poisoned kiss for their fairy tale princess — and they dressed accordingly. Of course, it only makes sense that Oberyn Martell's highly-trained killer daughters and paramour would pull off one of the major assassinations in the episode wearing gauzy gowns befitting of their royal-adjacent status. Of course.

I mean, only Ellaria Sand could look that fabulous seconds after nearly hemorrhaging to death, right?

Tyene and Obara both look magnificent in marigold (Tyene went with something ultra-feminine, while Obara went with something more characteristically frill-free and staid), while Ellaria's killing that gauzy blue-grey (no pun intended), and Nymeria is seriously princess-ing it up in pale pink.

Honestly, this looks more like a snap from Dior's recent runway show on the French Riviera than a screenshot of some ladies who just straight-up murdered a child, right?

I'm glad that the Sand Snakes finally got what they wanted (even though what they wanted involved the death of an innocent), but I'm hoping they're still going to be stirring things up in Season 6 — after all, Cersei (and the recently re-animated Ser Gregor Clegane/Ser Robert) aren't exactly going to be happy that they murdered Myrcella, are they? Here's to more Sand Snake stylish badassery in Season 6!

More like this
'Games of Thrones' Fans May Recognise This 'Conversations With Friends' Location
By El Hunt
M.A.C. Is Launching An ’80s-Chic Stranger Things Makeup Collection
By Olivia Rose Ferreiro
The Louis Vuitton Cruise 2023 Show Was Full Of Chic Celebs
By Allie Fasanella
The “Ugly” Trends Bella Hadid Makes Look Cool
By Allie Fasanella
Get Even More From Bustle — Sign Up For The Newsletter