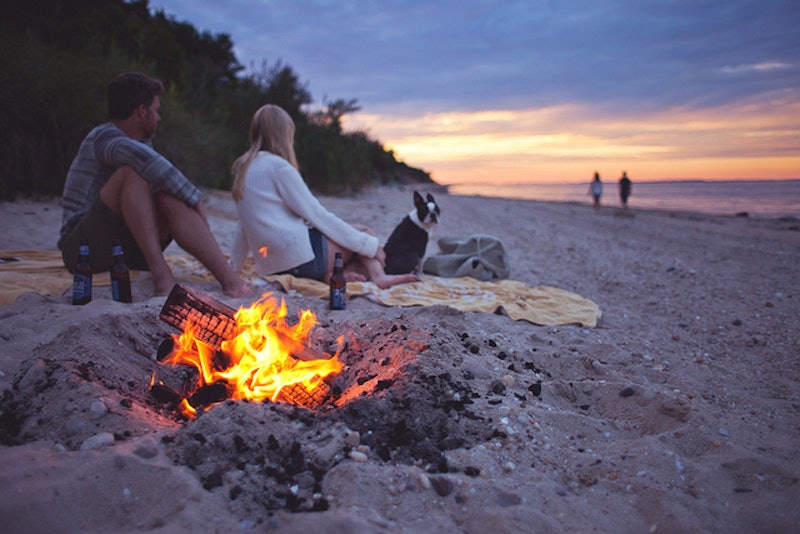 Several years ago I found myself in a tumultuous on again, off again relationship with someone who, as many of my friend dubbed him, was a sociopath. He would be, of all the men I’ve known, the one who ultimately destroyed me in many ways. He’s also the only person my dog ever bit, and bit hard enough to do some damage. Everyone’s immediate reaction was that my dog knew just how awful a person this guy was, and I couldn’t help but agree, albeit a bit later on than everyone else. According to a new study, my friends and family were right: Dogs can sniff out people who are jerks to their owner, which this dude totally was.

The study out of Kyoto University in Japan tested 18 dogs in three different scenarios to see how the dogs would respond in each one. The experiment consisted of the dogs’ owners asking a stranger for help in opening a box in which they were helped, denied help, or the strangers' response to the inquiry for help remained neutral. Next, all of the strangers from the scenarios offered the dogs treats, but the ones who denied help to their owners were the people the dogs refused to take treats from ― both the helpful and neutral group saw their offering of treats happily accepted. According to the lead researcher, “We discovered for the first time that dogs make social and emotional evaluations of people regardless of their direct interest.” I can’t say I’m even remotely surprised.

As a dog person, I can honestly say that my life is better because of my dog. I’m happiest when I’m with him and the connection we have is something I just don’t have with any human being in the world. Dogs love unconditionally, and pets, in general, have been found to make people healthier, especially when it comes to fighting stress. They can also, believe it or not, improve your love life in more ways than one. Here's how.

According to Alan Beck, ScD, director of the Center for the Human-Animal Bond at Purdue University, dogs genuinely help you connect with other people. When people have a dog, other people are more likely to talk to them and, of course, dogs make for instant conversation starters.

A study out of the UK found that 5 percent of dog owners met people they dated while walking their dog.

2. Our Dogs Are A Good Standard For Who We Should Date

Not only can our dogs sniff out someone who is bad for us, but as Dr. Suzanne Phillips wrote in her piece, “Can Pets Improve Your Relationship?” what we want in a significant other is often similar to what we experience in our relationships with our pets. People even want to be spoken to in the some lovey-dovey way as their partner talks to their pet.

3. You Feel Better About Yourself

It’s when you’re feeling good about yourself that everything around you gets better, too. If you’re single, you’re more likely to meet someone and if you’re coupled up, your relationship can benefit from your positive mood. According to pet researcher Allen R. McConnell, PhD., people with dogs aren’t just happier because of their buddy, but they’re more trusting, too. If trust isn’t a primary factor in a relationship, I don’t know what is.

4. Dogs Teach Us About Unconditional Love

With our pets we don’t hold grudges very long so we get over the fact that they ripped apart our favorite shoes, shit on the carpet, or even destroyed the bathroom because of their affinity for toilet paper. We don’t expect them to give us a hard time and we also manage to put on a happy face when we greet them even if our day sucked. We accept their flaws and they do the same ― there is an unconditional love between a dog and their owner (although I like to say “caretaker,” because animals aren’t for us to own).

According to Dr. Phillips, we get what we give, and if we can give as much to our partner as we give to our pets, then you make your relationship all that much better. I mean, can you imagine forgiving your partner for shitting on the carpet with the same ease that you forgive your dog for doing it? I’d say that makes for a true love situation right there.