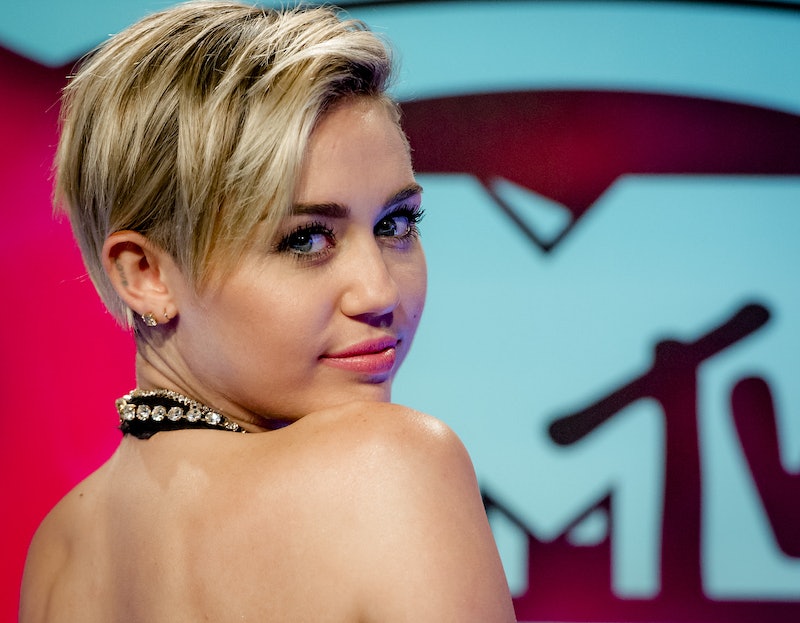 Miley Cyrus' social activism continues to inspire and encourage in equal measure. Under the banner of her Happy Hippie non-profit for homeless and LGBT teens, Cyrus has raised money and awareness for the LGBT community in truly inspiring ways (including by writing a moving op-ed and recording a duet with Ariana Grande). She has also been waving her feminist flag high lately as she talked candidly about being sex positive, loving being a woman, the perks of being single, and embracing her true self. Add in Miley Cyrus' fearless discussion of her own sexuality, and it is clear she is no longer just a talented singer, she is also a social activist warrior.

And her latest campaign will only make you love and respect her more. On Monday, Cyrus launched #InstaPride in partnership with Instagram as a means to help transgender people share their stories. "I'm launching #InstaPride today, in partnership with @Instagram, to share stories of transgender and gender expansive people from around the country," Cyrus wrote on Instagram. "Over the next two weeks, you'll meet them and the people in their lives who support them, as we highlight their stories of resilience."

According to an interview with Time, Cyrus served as photographer for the 12 people being spotlighted during the campaign. Her goal is to increase the visibility of transgender people and show others that they are not alone, and that someone does see them. Timing the campaign to come out as bathroom laws are being discussed in several states is no accident. "Anyone should be able to express how they feel, without question, and be able to live," Cyrus told Time. "And use the f--king public restrooms."

#InstaPride's first subject is already featured on Cyrus' Instagram. Leo (@isupersheng) is a 19-year-old college student from Michigan who identifies himself as lots of things. In his post he lists a few of them off, saying, "I have a lot of different identities. I'm a writer, a filmmaker in the works, a sometimes photographer, a good public-speaker, a social media junkie, a Gleek, a feminist, an activist a movie buff, a dutiful Netflix fan. The list goes on and on. As for my gender, I identify as a trans man."

Leo's photos and all of the photos are set to feature the gender neutral color yellow. Yellow is also associated with happiness and is the most prominent color Cyrus uses for Happy Hippie. While Cyrus was once primarily known for being a child star struggling to define herself, at 22 she is now one of the most self-assured celebs around and she seems determined to spread her confidence to her fans. Stay tuned to Cyrus' Instagram for more stories like Leo's in the coming weeks and if you want to get involved with Happy Hippie head over to its official site. In the meantime, don't forget to follow #InstaPride and share the tag with those who need it most.