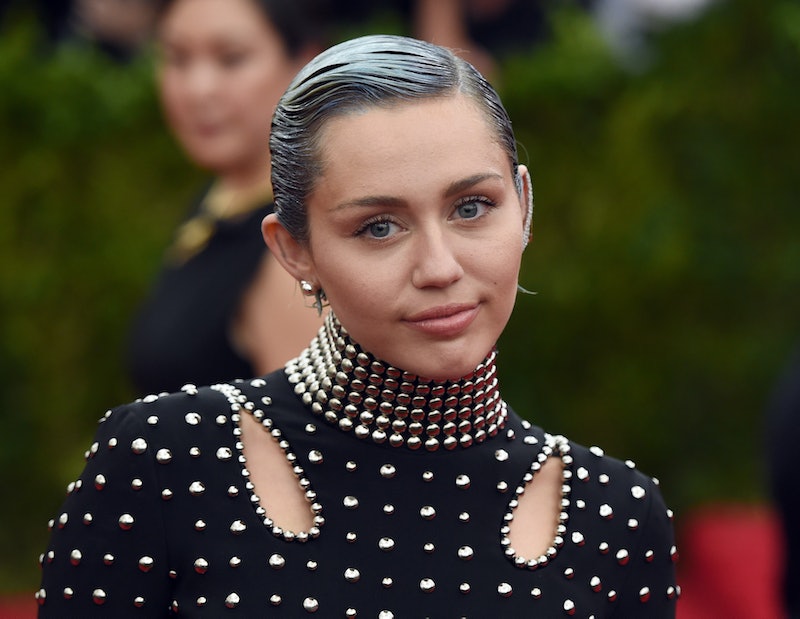 Miley Cyrus gave one of her most revealing interviews ever to Paper Magazine — and no, I'm not just talking about the photos, which feature a naked Cyrus posing with her pet pig. Cyrus' openness in her Paper Magazine interview has little to do with her naked form (which, it should be said, isn't a huge deal), though, and a lot to do with her identity. In the interview, Cyrus discussed her sexuality, and revealed how she confided in her mother, Tish, about being attracted to both men and women when she was 14 and still acting on Disney Channel sitcom Hannah Montana. Her words were majorly brave, and hopefully inspiring to her fans who may be struggling with their sexuality. Here's what Cyrus said of their conversation:

The confident, eloquent way Cyrus discussed her sexuality at a younger age in the interview is not only important, but may also be greatly inspiring to some of her fans who may be going through similar things in their own lives. This isn't the first time that Cyrus has discussed her own identity in terms of gender and sexuality, either: In another interview with Out, she revealed that she had never really felt comfortable with gender labels, and that she preferred to be identified as "nothing" over the "box that [she] gets put into."

Both of these interviews are important because they feature Cyrus tearing down antiquated ideas about sex and gender identity — thus, hopefully, encouraging her fans to do the same, and to feel comfortable with their own identity and sexuality. Here are responses Cyrus' words about her sexual openness have garnered on Twitter, indicating just what an important difference she's making:

Cyrus may be an entertainer, but the fact that she has an amazing platform to encourage positivity and change in the world is hugely important — and it's genuinely inspirational to see her openly discuss her sexuality with the world. Cyrus is doing what's best for her, and, hopefully by being candid about her sexuality — whether she chooses to label it or not — she can inspire others to accept others for who they are as well.