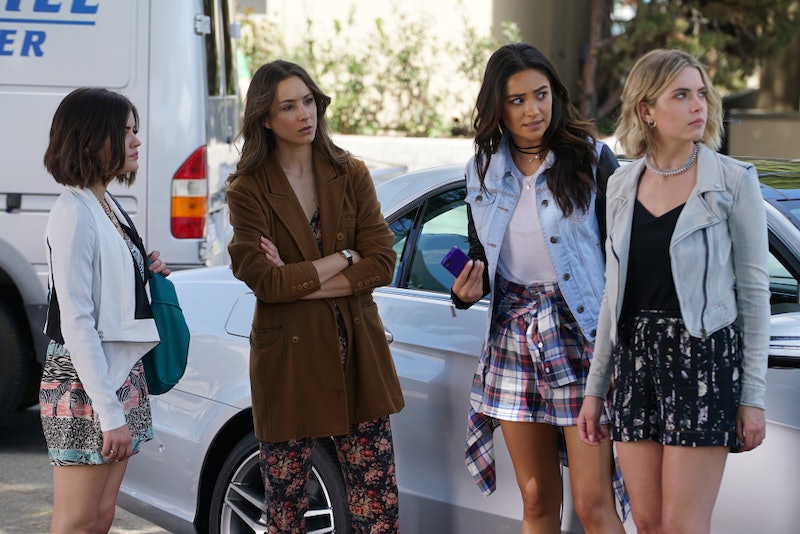 As Pretty Little Liars fans know, it's easy to get really (really, really) caught up in all the theories and clues. On a show like PLL, anything could mean anything, but sometimes, it's just nice to sit back and enjoy its other positive attributes, like the crazy/awesome style, and on-point one-liners, and the inspirational leading ladies. In fact, if you put aside the mystery for just a minute, you might realize that there are a ton of inspirational Pretty Little Liars quotes out there, which also make for pretty great life advice.

Sure, we watch the show for all the drama and the hidden identities, but its main characters have given us some pretty darn good advice throughout PLL's five seasons, be it in the form of witticisms, words of wisdom, or just plain leading by example. I mean, when you go past all of the faked deaths, torturous psychopaths, and backstabbing, PLL is, at its core, a show about strong female friendships (and a feminist one, at that — I mean, remember when Paige was Marlene Dietrich for Halloween?). So, with that in mind, let's take a look at 12 pieces of solid advice, c/o your favorite well-dressed Liars.

See? PLL's all about squad goals, and Hanna's never been afraid to stick up for her friends.

Yeah, always make sure your friends have your back. Especially when you're sneaking into a corrupt mental institution.

The way Emily helped her girlfriend Paige through the difficult terrain of coming out as gay was nothing short of inspirational.

4. "When you love someone, it's worth fighting for. No matter what the odds." — Aria

Never give up on love! Though if the person you love is your handsome yet creepy grown man of an English teacher, it might be a different story.

5. "I'm sick of people telling me what I should and shouldn't do." — Hanna

This is less of a piece of advice, and more an instance of Hanna leading by example. Either way, never let the haters bring you down, and don't be afraid to pave your own way.

7. "If there's someone in your life that cares about you, then I'm happy for you. No matter who they are." — Hanna

If only everyone in the world had the same attitude about sexuality as Hanna Marin.

8. "It's it's easier to walk away than to fight for what you really want." — Aria

Never take the easy way out (even when the hard way means going head to head with a bona fide psychopath).

In a recent episode, Emily took out her PTSD by firing a round (or several) at the local shooting range, which lead her to the realization that you shouldn't turn to violence for comfort.

Yeah, especially when you're running through graveyards in the rain, and hiding under beds in Radley (of course, Hanna had the perfect retort: "I wear three inches or I wear nothing").

11. "A big lie gives you something to hang on to. Trouble starts when you shave the truth and it just gets all twisted up." — Hanna

Of course, we get into the semantics of lying on PLL quite often, but that doesn't make Hanna's advice to Emily any less true. White lies are even more difficult to wrangle than big lies, which is a fact that we too easily (and too often) lose sight of.

Truer words have never been spoken, and I'm going to take this particular piece of advice to heart tonight when I marathon a whole season of Pretty Little Liars — I deserve it!