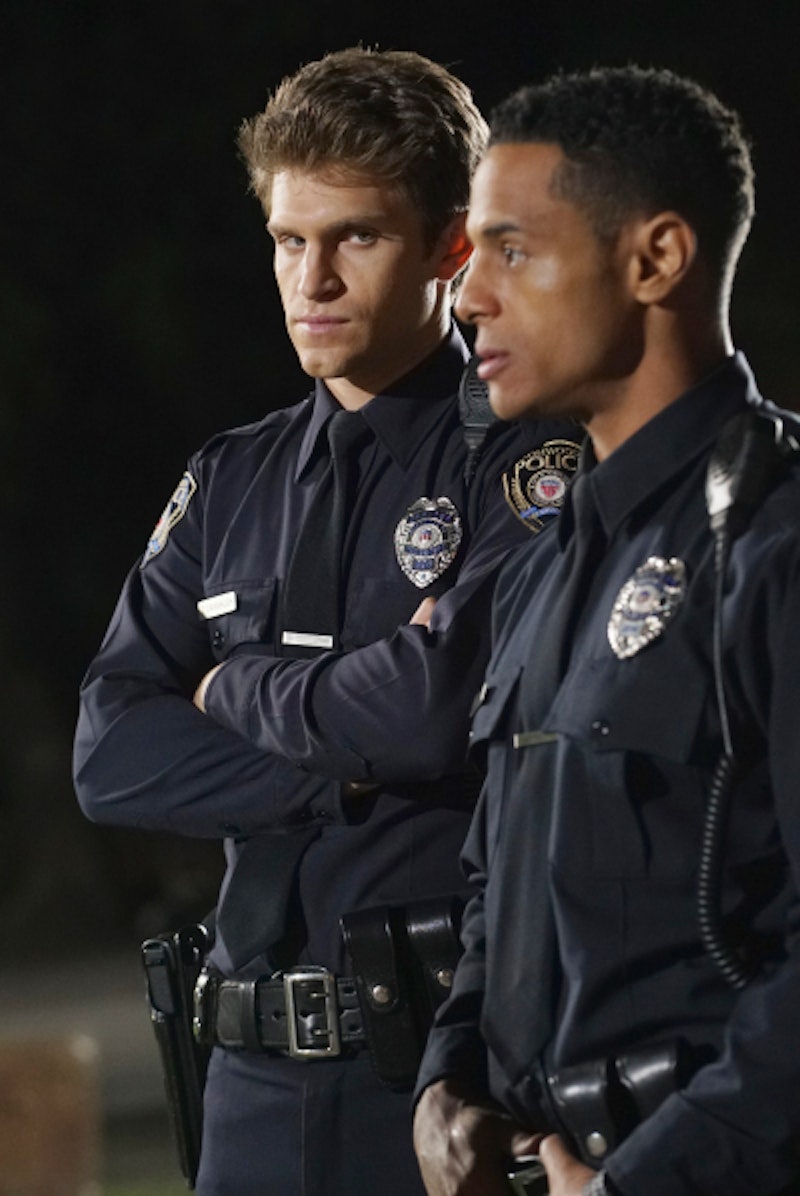 You can't just go ahead and introduce a brand new character at the start of Season 6, Pretty Little Liars , and assume that fans aren't going to be highly suspicious of them. Needless to say, we're not too sure about new Rosewood police officer Lorenzo. He's Toby's new partner, and he appears to have a little thing for Ali, too. Already red flags are being raised. Actually, scratch that. A giant red A trumpet is sounding, because this is PLL we're talking about and everyone is a suspect. However, could I be jumping to conclusions about Lorenzo a little too quickly? After trying to make up for my hasty judgements, I remembered that Lorenzo is innocent until proven guilty, and came up with a whole new theory. What if Lorenzo is really in Rosewood to protect Ali from Charles?

PLL loves to throw us curveballs. It also loves to taunt us with people who might not be who/what they seem. So while at first glance I'm ready to assign Lorenzo to the A team, he might be the complete opposite. I have to stop thinking that everyone to step foot in Rosewood is on the A team, because that's not the case. Until I see Lorenzo hanging out with Charles, I'm going to assume he's a good guy — there have to be some of those left in Rosewood, right? Otherwise, who would Caleb hang out with?

As Toby's partner, Lorenzo is already running with good people. In fact, when we first met him in "Songs of Innocence" he was telling Toby not to beat the living daylight out of just-captured Andrew. At first, I thought, "oh man, he's not telling Toby to beat him up, because he's on the same side as Andrew!" But now I'm thinking that Lorenzo is on the other side of this, the good side. Lorenzo doesn't want Andrew beaten up because he has morals. Plus, Andrew is obviously not Charles. I mean, come on.

It is still highly suspicious that Lorenzo just waltzed into town and managed to randomly bump into Ali. That can't just be by chance, but I think it was planned for a good reason. Maybe Lorenzo is actually in town to get involved in Ali's life and keep her safe from A/Charles/any future dollhouses. I think someone working against the A team sent him here to watch over Ali, and he's just doing his job by cozying up to her.

So who sent Lorenzo to town? My first guess is CeCe Drake. First of all, where the heck is she? Just because we don't see her, doesn't mean she still doesn't have a hand in this A game. Second, she's been known to look out for Ali before. It might not be safe for her to return to Rosewood, so in her place, she sends someone else. She sends an old friend (maybe from college?) to look out for Ali.

If it's not CeCe, there are a few other people who could be acting as Ali's guardian angel. I'd even suggest that Jenna sent Lorenzo, because Jenna doesn't seem to be an enemy anymore. Mrs. Grunwald also could have sent him. Or maybe there's a mysterious, random person out there protecting Ali, and slowly that will unravel as we learn more about Lorenzo.

So for right now — or, at least until he does something truly sinister — I'm going to assume that Lorenzo is one of the good guys on Pretty Little Liars. The police officer may not be exactly who he says he is, but that doesn't mean he's not here to help.