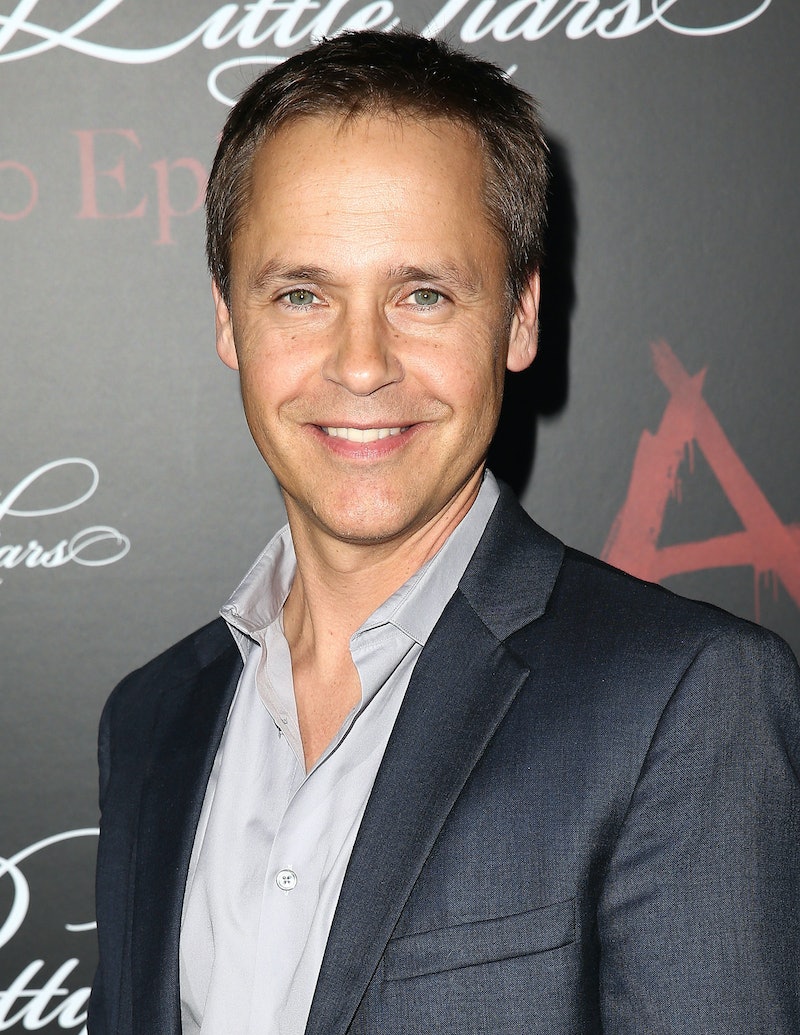 These days, I think pretty much every single possibility of Big A's identity has shown itself somewhere in the Pretty Little Liars fandom. Believe me, I've spent the better part of the last three weeks combing the Internet for PLL Charles theories and at this point, I'm pretty sure I've seen about every single one. That said, all of the chatter surrounding Aria's perennially creepy dad started to catch my eye: Could Byron Montgomery be connected to Charles and the A game? A good hour or so traveling deep into Tumblr and Reddit dug up a surprising amount of evidence.

After all, he's always been shady. In a 2013 interview with the Huffington Post, executive producer Oliver Goldstick even called Byron "many shades of wrong." Many fans are also suspicious of the fact that Byron was the only parent mentioned to be talking to the police alone, post-dollhouse in "Songs of Innocence." (Why specifically Byron, when he's barely ever around? Ella or Ashley would have made a lot more sense.) At any rate, I think we can all agree that he's somehow involved... so here are a few ways Byron could be linked to Charles. And for more theories about the always sketchy Byron, plus all of the Charles suspects you could ever want, check out Bustle's Pretty Little Liars podcast.

He Could Be Charles' Father

So how do we get from point A to point B on this one? How and why would Byron be Charles' father? Well, the Tumblr rosewood-clues traces it back to a line about Byron's brother Scott having suffered from mental illness. As some forms of mental illness (we don't know exactly which one is at play here yet) can be hereditary, a lot of fans took the Montgomery family factoid as a clue that Byron had an affair with Jessica DiLaurentis, which resulted in a mentally ill child (or children), aka Charles and/or Bethany Young.

He Could Be Charles' Uncle

This operates on the same tenets as the above theory — except in this version, Scott's the father of Charles, not Byron (which I guess would make Charles Aria's cousin?).

Oh, PLL. You sure know how to make a girl's head spin.

He Could Be Beach Hottie

It sounds outlandish, sure, but could Byron be the "older boy" (OK, much, much older man) that Ali was seeing the summer before she disappeared? Fans have theorized for years that the two of them had an affair and if you combine their shared history, the fact she was blackmailing him, and the way that PLL is absolutely littered with Lolita references, you've got yourselves the makings of a viable theory. Tumblr user AnalyzingA, breaks it down in great detail, reminding us that that Ali called Byron "cute but old" in a journal entry, and pointing out that she was always pretty obsessed over his affair with Meredith (she memorably wrote "You can't get rid of me" on his office wall when she trashed the place with Aria). Come on, all the creepiness and countless Lolita nods have to add up to something, right?

Now, how does Beach Hottie connect back to Charles? Maybe he does, maybe he doesn't — but I'd guess that they're somehow connected in Rosewood's labyrinthine web of lies.

He Could Be Uber A

An affair with Ali could definitely be seen as motive to get the A wheels in motion — so if he doesn't turn out to be related to Charles, Byron could very well turn out to be his adversary. In an interview with Entertainment Weekly, showrunner I. Marlene King hinted that Charles/Big A might not be the end-all be-all as far as the A game goes — Uber A could still be out there. And if Uber A's out there, Byron is definitely one of the frontrunners for the title, right? I mean, before Charles came along, Byron was up there with Wren and Ezra on the suspicious meter. Plus, the Pretty Little Theories Tumblr points out that Byron's handwriting is very similar to both the writing on Ian's suicide note and the note Jason found in his pocket the night Ali disappeared .

At this point, we don't know for sure how Byron's connected to Charles and the A Game, if he is at all, but we do know he's the shiftiest of the dads, which is kind of saying a lot in the world of PLL. Now, does shiftiness equal a connection to a murderous psychopath? Only time will tell.