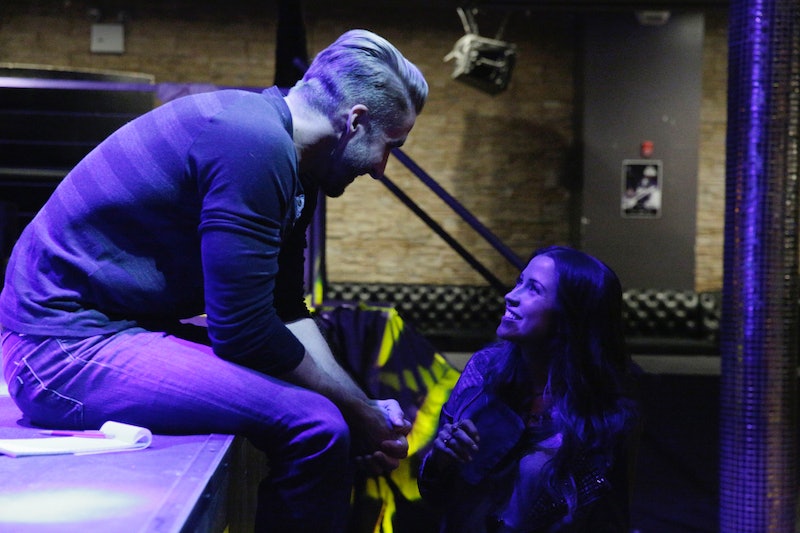 As if he couldn’t get any hotter (I’ve tried to imagine it, but it’s blowing my mind and then I pass out), Bachelorette's Shawn B. totally bared his soul to Kaitlyn on their one-on-one date this week. The two went out for a kayak ride on the San Antonio River Walk (it was funny watching Kaitlyn worrying about whether or not she had to balance on the kayak — girl, it floats) and followed it up with a romantic faux dinner (you know, because they’re not supposed to eat the food) and canoodling next to a roaring fire.

This date was the date in which Shawn B. really opened up to Kaitlyn, which is something she’s been wanting for a while. During their conversation, Shawn revealed that he was in a truly horrific car accident: He got hit on the driver’s side of his car by a driver doing 75 miles per hour, with his car flipping six times and him basically thinking he was going to die. The doctors said they had never seen anyone survive an accident like that, and it’s sort of given Shawn a new lease on life, which I think it would for me, too. Then he started crying and my heart fell out of my body and melted onto the floor.

Then the big guns came: Shawn told Kaitlyn that he thought he was falling in love with her, and Kaitlyn was so obviously overjoyed. I mean, they’re so clearly into each other, and, through all the absolutely stupid gimmicky dates we’re seeing this season, it’s nice to see people who have a real connection. This is actually the stuff that relationships are made of.

Because Kaitlyn and Shawn are so into each other, I have a sneaking suspicion that Shawn is the one that Kaitlyn ends up sleeping with, and all of their interactions in the preview for the next episode are the fallout. If that’s the case and these two are so into each other that they couldn’t keep their hands off each other, what’s the harm in that? And if it’s not Shawn that Kaitlyn sleeps with next week, what does that mean for his fledgling “I love you?” I guess we’ll just have to wait to find out.