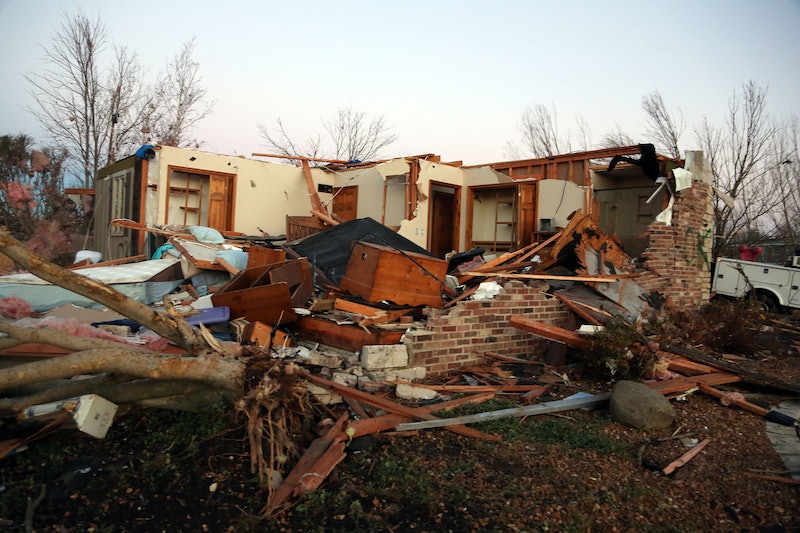 A fast and unusual set of November tornadoes hit the Midwest late Sunday, leaving six dead and mass destruction in their wake. Sixteen tornadoes battered Indiana and eight ripped through Kentucky, while Missouri and Ohio each had one. Another ten tornadoes hit Illinois, injuring 54 people in that state alone. Now, forecasters are saying that the storm system will head up to the Northeast, making its way to Maine, Boston and New York by early Monday.

A meteorologist at the Weather Channel told NBC that winds of nearly 50 mph are predicted to hit the major Northeastern states, but that the effect would be short-lived. “There may be some power outages, certainly some travel interruption, particularly out of the Northeast airport hubs,” he said. “But it will over quickly. It will rapidly in and out.”

The Midwest wasn't as lucky. The late-season storms destroyed houses and flattened entire neighborhoods, as the tornadoes moved at the dangerous speed of at least 60 miles per hour for roughly five hours. By Monday morning, Massac County had reported three deaths, and another two had been killed in Washington County. One person was reported killed in Tazewell County's city of Washington.

"This is more like April, May," weather service meteorologist Dan Smith said. "The speed at which the storms were moving ... anybody that's in the path of those, you'd get a warning, but you didn't have a lot of time to react."

Scores of people ended up in hospitals with storm-related injuries — at least 50 patients at St. Francis Medical Center, Illinois, were wounded thanks to the tornado, and eight of them were trauma cases. Adding to the chaos, the storms wiped out power for over 390,000 residents in Michigan, while 160,000 people went without electricity in Indiana. Another 75,000 residents in Ohio struggled on without power as well, emergency officials said.

"We have reports of homes being flattened, roofs being torn off ... We have actual whole neighborhoods being demolished by the storm," a spokeswoman for the Tazewell County, Illinois health department, told Reuters.

Take a look at the giant force of destruction:

More like this
Why Experts Say Sleeping With A Fan On Isn’t Totally Risk-Free
By Sophie McEvoy
The 6 Best UV Umbrellas, According To A Dermatologist
By Rachael Green
Scotland's First Period Dignity Officer Has Sparked Backlash
By Darshita Goyal
25 Things I've Reduced My Life To, In Addition To WFH In My PJs
By Ginny Hogan
Get Even More From Bustle — Sign Up For The Newsletter