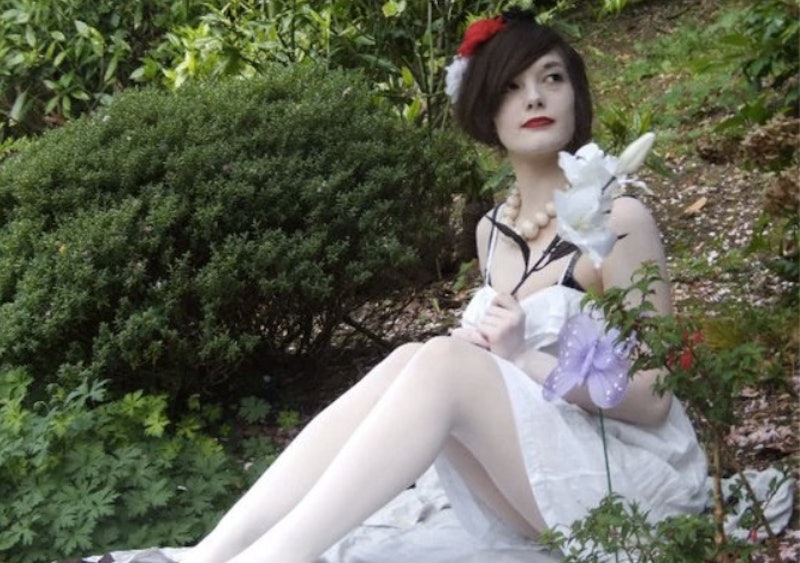 My newfound happy relationship with the traditional feminine aesthetic has taught me that, sometimes, nothing puts a spring in my step quite like a girly sundress. Even now as I sit typing on my laptop, my boat-patterned summer dress smiles at me invitingly from an open wardrobe. It's my favorite dress. It's the dress that, given the choice, I would spend morning, noon, and night in. It's an unassumingly feminine garment that harnesses my most extravagant, pie-in-the-sky dreams, and makes me feel completely comfortable in my own skin.

But I haven't always been so au-fait with the traditionally feminine aesthetic. In fact, my relationship with the world of "girly" things has been a series of swings and roundabouts. As a happy-go-lucky toddler, I wore purple-checked pinafores and Lion King leggings with equal abandon. But my favorite garment was a full-blown feast of little-girl femininity. Think cotton candy pink and buttercup yellow, galloping horses, and fairground carousels dancing around the hem of a full skirt, all while a silk bow hemmed me in at the waist, giving me a reassuringly ribbon-y hug.

It was love at first sight. I wore it everywhere, watching my skirt fan as I twirled; the human centre pole for my cotton carousel horses to spin around. That is, until one fateful day I wore it to the park with the confident, carefree cousins I had always been in awe of.

As we took turns spinning on the turn-a-wheel as fast as it would go, one ill-balanced step caused me to flail to the floor, my beautiful skirt covered in assorted muds and cigarette ash, my legs scratched and exposed. As my cousin helped me up, I felt tearful and embarrassed. Unfortunately, there was more trauma to come; despite a triple spin on the hot wash, my beloved dress didn't survive its dog poo christening. I was devastated.

From then on I struggled to feel comfortable in feminine clothing. Skirts seemed impractical, cumbersome, and prone to leaving you looking like a damsel in distress. And the female characters from my favorite books and films — George from The Famous Five, Jo from Little Women, Mulan — sent me another message entirely. If I wanted to be proactive, clever, and independent, I had to dress and act like boys. I realized I had to make a choice: Fun and freedom in tomboyish clothing, or frilly, restrictive femininity.

Consequently, I started choosing to dress like my "tomboy" heroes. I resented the flowing, full-length bridesmaid-style dresses my parents chose for birthday parties that stopped me playing tag, or pass the parcel. I saw the tall, tanned Barbie dolls in my dusty doll house with their short pink dresses, long smooth legs, and thick blonde hair, and felt plain and dumpy next to them with my brown bob and downy hair-covered legs. The Barbies symbolized the only two expressions of femininity I knew, and both were equally alienating: either babyish dependence or a completely unattainable level of grown-up glamour.

Throughout junior and high school, I continued to shun any style choice that alluded to my perceived notion of traditional femininity. It wasn't that I resented fashion, though. In fact, I drank in the wise words of UK teenage style bibles Mizz and Sugar like an extra-tasty Panda Pop, and frequented Tammy Girl as often as my paltry pocket money would allow. But I took refuge in jeans, sneakers, and the rising emo subculture. I refused to wear “girly” pinks, bodycon skirts, or floaty fabrics. In middle school, the way I saw it, you could either wear pink and risk being deemed a superficial simpering (as yet un-coined) basic b*tch, or don black denim, Converse, and side bangs and fly the reverse flag for nonconformity. That's your lot, ladies!

It took judgemental, confused, adolescent Raffy until the age of 16 to realize that, actually, lady, that isn't your lot at all. The shift in mentality started subtly: A black skirt (acquired one birthday), a denim miniskirt (a hand-me-down from a taller friend), a patterned skater skirt (discovered in a department store sale), until the fateful day I caught myself admiring a red and white gingham dress almost identical to the ones I'd admired on my dress-up dolls from childhood.

After years of dressing androgynously, I was shocked at how good it felt to dress more traditionally feminine. The soft red and white gingham flattered my milk bottle complexion, the ribbon reacquainted me with a waist I’d forgotten I had, and the A-line cut was loose enough to be comfortable yet not so full-skirted that a rogue gust of wind would show what I was working with. But what did this newfound happiness mean? Was it time to bring down the wall between my emo persona, and my former flouncy-dress-loving self?

My attachment to the beautiful garment grew with every wear, until I realized that my comfort within the dress came because I’d managed to incorporate it into my wardrobe while still retaining my sense of self. By donning a traditionally girl dress, no personality transplant had taken place. I was still able to do and be everything I wanted, without being forced to compromise.

Armed with rejuvenated confidence, I restarted the journey of exploring and embracing my own personal notion of femininity. I realized that, thanks to the outdated examples set by our patriarchal society, I'd been equating gender neutral dress with power, and traditionally feminine attire with vulnerability — declining to acknowledge that, in actuality, vulnerability can be a strength, not a weakness.

After all - who cares if you don’t fit the mainstream fashion industry’s cookie-cutter mould of femininity, anyway? For me, it was simply about having the confidence to adjust the boundaries of my personal femininity whenever I saw fit — and the realization that ribbons and tea-dresses don't have to equal a shy and submissive wallflower. After all, my personal style exists to express every corner and crevice of my existing persona; not to unnaturally suppress it under bows and brocade.