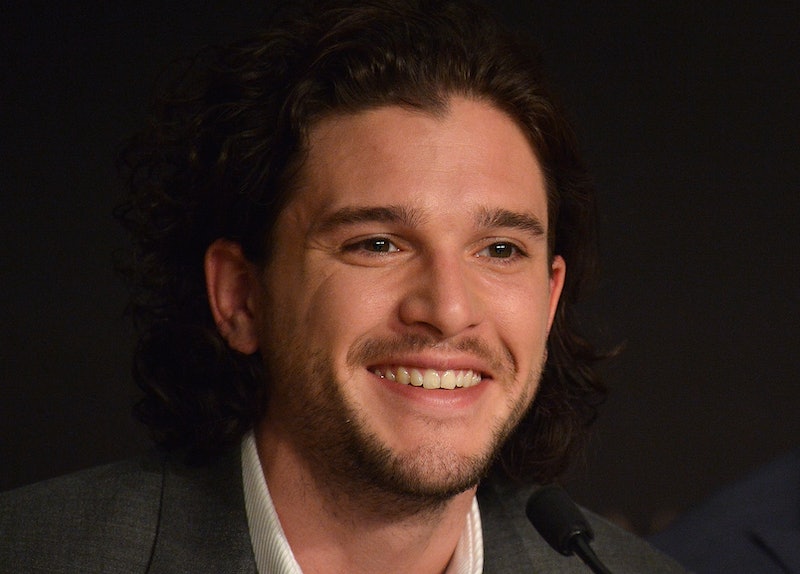 Spoiler alert: Nobody wants to talk about how Game of Thrones Director David Nutter ruthlessly killed off Jon Snow. And at the same time, all anybody wants to talk about is how Jon Snow will surely be brought back from the grave, because how could he possibly be dead? (Sorry to burst bubbles, but Nutter confirmed in an interview with The Hollywood Reporter that Snow is most assuredly not coming back). The fascination with all-things Jon Snow extends to Kit Harington, the cute 28-year-old British actor who flawlessly portrayed the Commander. The actor has only accrued nine credits to his name, according to IMDb, but that hasn't stopped him from enjoying quite the reputation as a ladies man and (swingin' '70s term headed your way) hunk.

In an interview with Page Six, Harington said being called a hunk is "demeaning" and revealed the following about his romantic life:

I’m a hopeless romantic, maybe to a fault at times, because it’s gotten me into trouble. But I love romance. I think it’s one of the greatest pleasures in life. It’s about giving each other something, it’s giving something away and it should be a most unselfish act. It’s saying, "I’ve hired a little cottage somewhere. We’re going away! Surprise!"

So, basically, you're admitting that you're perfect, Harington. You have perfect curly hair and rent "cottages" for spur-of-the-moment weekend trips. You are as real as Jon Snow. Is it any wonder he has been linked to several famous women — some of whom have been confirmed as his actual past girlfriends and others who would be insane not to marry him right this minute because... hello, cottage.

Yep, Harington admits he has a thing for redheads and GoT's Rose Leslie more than fits the bill. After publicly dating for about a year, breaking up, and then getting back together, the co-stars agreed to split for good. Fortunately, Harington and Leslie have somehow managed to remain friends, which just proves they're both so cool they actually belong together. And, given the fact that Leslie's Ygritte was killed off, as well, now the two can bond over their fictional deaths (too morbid)?

Browning and Harington were hot as co-stars in Pompeii. Their chemistry was so evident that some began speculating the two might be off-camera lovers. The 25-year-old quickly killed those rumors by revealing to the Belfast Telegraph that kissing Harington wasn't exactly the sexiest moment in her life: "We became good friends before we ever had to shoot a real love scene, because for most of the movie it's all stolen glances. The first day we actually had to kiss was sort of terrifying because we felt almost like siblings by that time."

GoT's Daenerys is probably the overall biggest heartthrob on the show so it makes sense that the universe wants to believe she and Harington are way more than just friends. The two are constantly spotted laughing and hanging out together — both on set and off — and rumor has it the 28-year-old actress is as smitten for him as he is for her, according to the Daily Mail. Despite claims that Clarke and Harington are being cautious because of their conflicting schedules, neither party has confirmed they are actually in a relationship, but fingers everywhere remain crossed because they'd make a super-cute pair.

Ah, the Rachel McAdams rumor. All we know right now is that she sometimes has red hair, which may or may not make her his type, and that both she and Harington were spotted having dinner together in Toronto way back in 2013, when a Twitter user was able to post a photo with them and ignite a bit of fun gossip. A few things immediately shut down this rumor: McAdams is linked to everyone, Harington was reportedly dating Leslie at the time, and — most importantly — the two were having dinner with a group of friends. Shut. It. Down.

Now that he's poised to become a huge star, expect to hear a few more names added to the list of women Harington has maybe loved, maybe not. But don't expect much in the way of juicy gossip. As Harington told GQ magazine: "I'll never talk about any particular relationship I've been in." Proving, again, he's a perfect man... with a cottage.