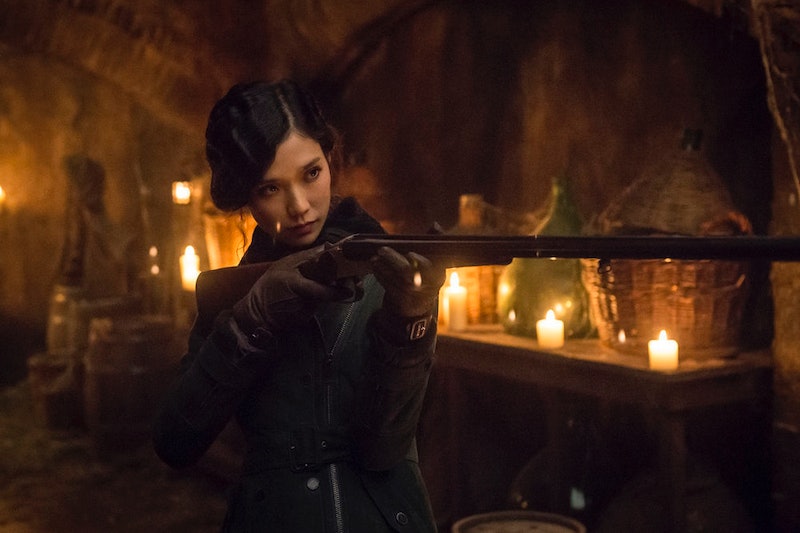 Some shows like to start their seasons off easy, reminding returning viewers where things left off and making things somewhat accessible for new audiences as well. And then some shows are Hannibal : Bryan Fuller's NBC drama started its third season unfettered from any such traditional trappings. Season 2 ended with the titular gourmand on the run; when Season 3 began, it was minus the killer-of-the-week format and plus lots of crazy abstract images of shattering teacups and dripping blood. But, after two episodes' worth of so-called "pretentious art films" that explored the inner mindscapes of Dr. Lecter and Will Graham following last year's bloody cliffhanger, Hannibal will finally get back to brass tacks with its third episode, "Secondo," in which viewers will meet a new character named Chiyoh.

Played by Tao Okamoto (The Wolverine), she will encounter Will when the FBI profiler "continues his search for Hannibal Lecter, making his way to Hannibal's childhood home in Lithuania." Why's Will traveling to Lithuania? And what's a character named Chiyoh doing there? Is she from the Thomas Harris novels, or is she an original creation? This being Hannibal, the answer, of course, is, "It's complicated."

Originally, fans of Harris' books were looking forward to meeting Lady Murasaki, ever since Fuller promised her introduction last spring. Murasaki won't be a name familiar to those who have only read the original Hannibal Lecter trilogy — she didn't pop up until the 2006 prequel, Hannibal Rising. In that book, we learned that she was the wife of Hannibal's uncle Robert, with whom he went to live in France after a troubled childhood in Lithuania involving Nazis, a dead sister, and cannibalism. Eventually, Murasaki became both adoptive parent to Hannibal and the object of the budding serial killer's affections.

But, sometime during the hiatus between seasons, Fuller's plans changed. Sadly, we're no longer getting Lady Murasaki. (At least, not yet.) Instead, we'll be introduced to Chiyoh, the Lady's attendant. Chiyoh also hails from the pages of Hannibal Rising, although she was a very minor presence: a girl about Hannibal's age, she spent her days waiting on Lady Murasaki, practicing origami, and playing the lute before leaving the French estate to return to Japan.

So why the sudden change in plans? Why introduce such a minor character instead of a highly-anticipated fan favorite? First of all, you shouldn't fear that Chiyoh's role here will be too "minor." Fuller is no stranger to futzing with the limits of adaptation, stretching Harris' source material into his own original design. (See: Freddy Lounds and Alan Bloom resurrected as women.) The brilliant showrunner likely has plenty of plans for Chiyoh.

As for the reason we're getting the handmaiden instead of the lady, it comes down to a matter of age. Fuller decided he'd rather have an actress who was a contemporary of Mads Mikkelsen and Hugh Dancy for his two lead actors to play off of, rather than someone old enough to be Mikkelsen's mother. As someone who both waited on Murasaki hand and foot and knows all about Hannibal's dark past, viewers can even consider Chiyoh an "adaptation" of Lady Murasaki herself.

And, like most of Fuller's creations, this iteration of Chiyoh looks to have more dark secrets than her thinly-drawn book counterpart... if this picture from "Secondo" is any indication:

Why does Chiyoh have a man locked in a cage? Who is he? How'd he get there? What does she plan to do with him? We'll find out this Thursday night.