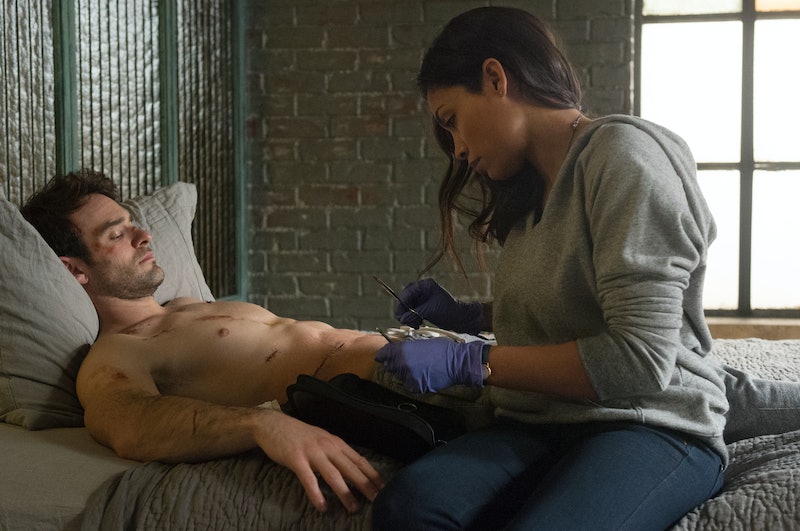 It's widely agreed upon across the greater Internet that Rosario Dawson as Claire Temple — aka The Night Nurse — was one of the absolute best parts about Daredevil, aside from Charlie Cox and his expressive chin. She was clever, feisty, and didn't let Matt Murdock push her around or get dragged down by his (often violent) drama. Plus, she's great at stitching people up, so she's useful in an emergency. Basically, she is the whole package and was not in nearly enough of Season 1. When she disappeared after a few episodes, I thought that might be the last of her, until news broke that Claire Temple will be in Daredevil Season 2, and it sounds like her role could go in some really interesting directions.

In an interview with MTV News, Rosario Dawson talked about the benefits of having Temple in the MCU: "Even just having Night Nurse and Claire Temple come together was already changing the Marvel Universe ... So it just feels like, A) I finally get to join Marvel. I get to do it in a way that’s completely altering the universe, which is awesome. And then, B) I have no idea where it’s going to go, because here I was having a fling with Matt Murdock, and now Luke Cage is coming up, and Jessica Jones."

I love this quote because it covers how quickly this universe is expanding and the many places her charterer could go. Unlike Karen Paige (Murdock's other possible love interest), Temple is originally from the Luke Cage series, so she can pretty much do anything without fans yelling cannon divergence. Temple is so charming I've devised none ways the Night Nurse can take center stage in Daredevil Season 2.

Sure, she doesn't have a law degree and might not be a lot of help around the office, but it would be a great cover for Matt to get medical attention easily. Plus, this way she'd get to interact with Foggy and become friends with Karen, and I'd love to see them form a Scooby gang.

2. Sue The Pants Off Someone

Or she could go the easier route and just hire them to represent her. She could sue the gangsters who kidnapped her, her old hospital — I'm sure she has a list of people she could drag to court.

Clearly the girl likes a bad boy, and I have a feeling this dude will be the baddest of them all. If they begin dating, that puts her in direct conflict with Matt, meaning some good old fashioned drama.

We already have a lot of masked vigilantes running around. What's one more? She could decide to help Matt out and get a nice little mask of her own. Plus, I'm pretty sure she can stitch up her own wounds (#likeaboss).

It was widely rumored that Dawson was cast as Electra (taking over for Jennifer Gardner). They could pull an epic bait and switch where it is revealed that Temple is the same crime fighter all along. Maybe this is a long shot since the show referenced a "Greek girl" as one of Murdocks ex-girlfriends, but it would make for interetsting TV.

6. Date Matt, For Real This Time

They already tried to have a... fling? Relationship? Thing? Unfortunately, it was short lived. I am all for them giving this another go. And, if that means more sex scenes, then so be it.

7. Tap Into The Dark Side

It's very had to top William Fisk, and I know that the Punisher is going to be the next Big Bad, but how amazing would it be to see his former lover turn into the ultimate enemy? It would set a pretty fabulous example for women being more than love interests. Dawson definitely has the chops to go full-evil.

8. Move In With Karen

These ladies would get along for sure, and both seem like they need a good friend. Let's have them room together so we see their friendship blossom.

Because he really needs a good woman, and seeing the look on Matt's face would be priceless.

I'm betting she'll turn up there in some capacity since that's where her character originated. Dawson could easily take on lead roles in both shows, seamlessly bringing the two universes together. Basically, there is so much that Season 2 can do with Claire Temple, so let's hope that whatever they decide is something really good.