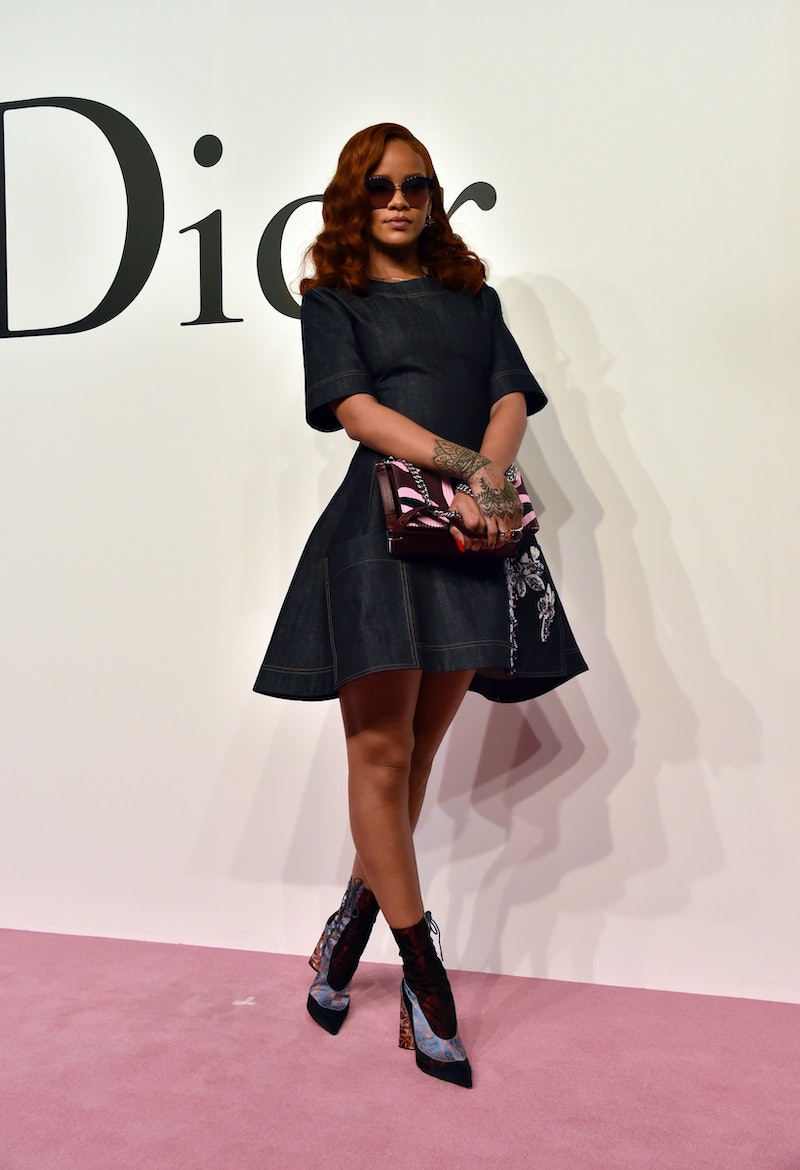 Is it just me, or is Rihanna's new gig with Dior kind of the best thing ever? I mean, first off, it's awesome that she's the first black woman to represent the brand, ever (by that, I mean it's awesome for Rihanna, and not so awesome for Dior — I mean really? You waited until 2015?) and then on top of that, her sparkly short film for the brand completely knocked it out of the park. The equally fabulous commercial was pretty darn awesome, too. And the little fact that she wears the brand's designs like no one else? That's really just the icing on top of a super stylish cake.

Her most recent outing wearing the brand celebrated Dior's runway show in Tokyo. She absolutely killed it in denim, pairing a futuristically-silhouetted shift dress with some cooler-than-cool sunnies, an embellished pink and brown clutch, and some crazy-crazy patchwork booties, and it got me thinking: How many other times has Rihanna worn Dior?

She's the newest spokesmodel for the brand, but she's been wearing their designs since her early days of superstardom (remember her red-red bob hairstyle?) — and she's always worn the clothes with her signature Rihanna flair. So let's take a look at some of bad gal RiRi's absolute best Dior moments.

3. At a Launch Event for Tidal

4. At the Los Angeles Premiere of Home

Which one is your favorite look? That flower-inspired couture gown from the Grammys is pretty darn impressive, but I'm also loving the space alien-vibe of her latest ensemble. At any rate, I'm sure we'll be seeing a lot more of Rihanna in Dior as her spokeswoman-ship continues!

More like this
Rihanna Is America's Youngest Self-Made Woman Billionaire, According To 'Forbes'
By Hugh McIntyre
Ciara Is Just Getting Started In Fashion
By Dominique Norman
Rihanna Just Made Her First Official Outing Since Becoming A Mother
By El Hunt
What Is Ariana Grande's Net Worth? When It Comes To Money, She Has No “Problem”
By Hugh McIntyre
Get Even More From Bustle — Sign Up For The Newsletter