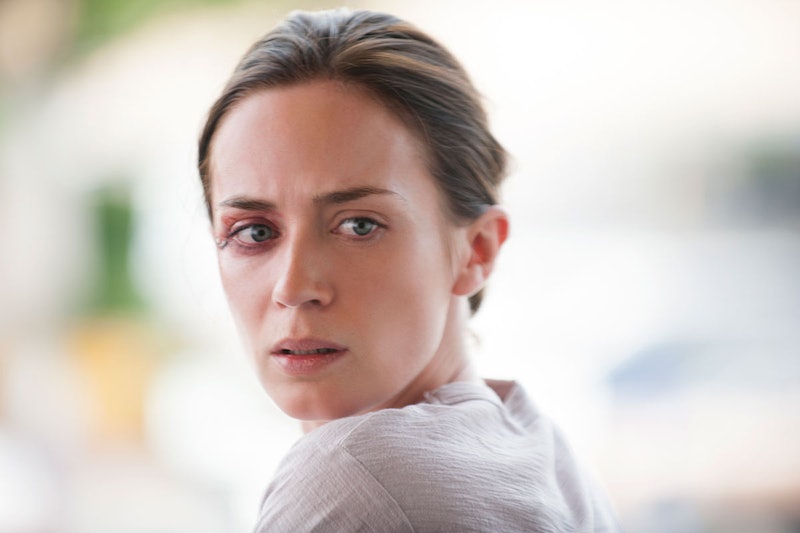 I seriously love me some Emily Blunt and will basically see anything she's ever in for the rest of her life, so it's no surprise that I'm pretty pumped about her new movie, Sicario . It's an intense and in parts seemingly downright terrifying crime thriller and marks a departure for Blunt in the best possible way. The word 'sicario' apparently means "hitman" in Mexico, and the film takes place in a border area between the country and America, where the war on drugs is deadlier than ever. Blunt is an FBI agent named Kate who gets involved in this war and ends up basically doing whatever she can just to stay alive. Sounds pretty great, right? But if you're into the description, just wait until you watch the trailer.

I'm totally into movies like this, so Sicario is right up my street. Explosions? Check. Dangerous criminals? Check. Bad-ass female FBI agents who rise to the occasion, no matter what they're facing? CHECK. The movie isn't even out until September in the US, but basically I'm going to be looking forward to it all summer long. In the meantime, check out the most intense moments from the Sicario trailer below and be excited with me, because it's going to be so, so good.

I imagine you're probably always on high alert if you're running an international drug cartel, but you probably don't expect a tank to come BUSTING THROUGH YOUR HOUSE. I mean, what?! We're starting off on a high note, I see.

Why Are There Dead People In The Walls?

Again, I guess if you're involved in drug trafficking across international borders, you probably anticipate ending up dead at some point or another. The people stored INSIDE THE WALLS of this place were the unlucky ones, and I don't even want to know what they did to get there.

I mean, I know I kinda spoiled this part by telling you already that scario means hitman, but seeing it come up across the screen like that is pretty chilling. I'm not ready to die! I mean, I know it's just a movie and all, but you know.

If You Need That Much Security, You're Probably Not Safe

If I was Kate, I would be losing my mind in pure terror that someone was going to shoot me with machine guns, since I needed to travel with such heavy guard of my own. Of course, that's why I'm not an FBI agent. I'm a coward — is that what you want to hear?!

Oh God, This Is Going To Be Bad

If you're stopped on a Mexican highway in endless rows of traffic when you're chasing some drug lords, it's probably best to be vigilant, because THIS might happen.

Well, I Guess It's Good She Brought Her Own Gun

You never know when you're going to have a shoot out on your way to the office, so it's probably best to come with your own gun, and bullet-proof vest, for that matter. This is way too crazy and I'm a little bit freaked out right now.

I mean, she's the star of the movie, so she can't really die, can she?! I mean, I guess it wouldn't be unheard of, but she's better than that! Don't go out that way, girl! I believe in you!

Sicario looks amazing, right? Watch the full trailer below and try not to get too excited for September.