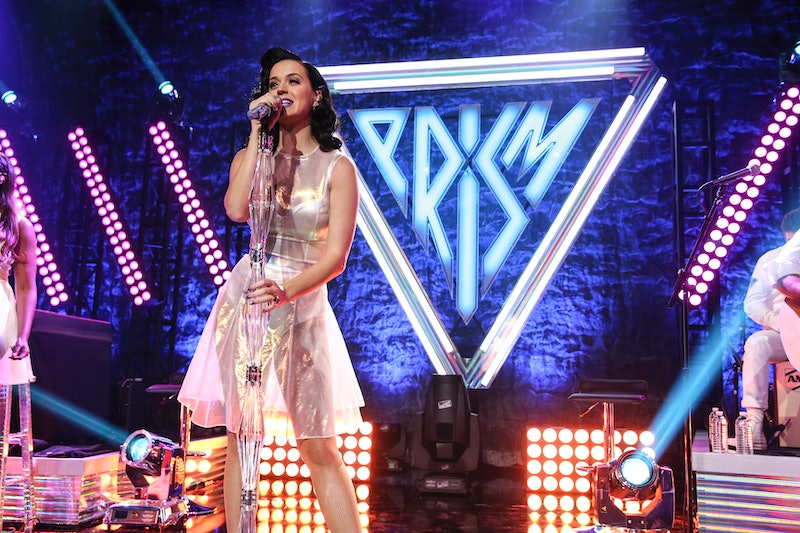 There’s no real remedy for getting an infectious song out of your head, especially when the tune in question is a wildly popular song. Once it’s in there, it’s staying, because you’ll hear it in every grocery store, restaurant, bar, sports arena, and car playing the radio loud enough for the entire block to hear. In 2013, there were quite a few songs that made us sing along constantly, whether we liked them or not.

These are not necessarily the best songs of 2013 (though a few are pretty incredible). These are the inescapable songs we couldn’t stop mouthing lyrics to like Taylor Swift at a 2013 awards show. With regard to your presently clear mind, we apologize for the barrage of well-worn lyrics that are about to become trapped within its confines. And be warned that this may be you as you read this list (it was certainly what I looked like making it):

There was no doubt this Katy Perry anthem wasn't going to capture our attention like flies in honey. She's a hit factory and this one marks all the right spots: confidence, strength, and independence, all wrapped up with a sweeping chorus as a bow.

If Gaga released a single that hadn't permanently wormed its way into our brains, there'd be cause for concern.

HAIM's catchy single didn't necessarily top the Billboard charts, but if you've seen the Internet in the past few months, it's plain to see the group's influence is growing (as is my inability to stop singing "Falling").

We waited for eons and eons to hear some new Justin Timberlake, only to get his haunting ballad about his wife Jessica Biel stuck in our heads. Sure, it's beautiful, but we haven't been able to shake it for a good eight months. There wasn't even room for any "Take Back the Night" lyrics.

Even if you didn't actively seek out this Lana Del Rey song, it weaseled its way into your brain through Nespresso commercials and the soundtrack at boutique coffee shops. And unfortunately, it's composed with just the perfect amount of languid energy to sweep you right into its own melancholy mood.

We tried to avoid this one, but even the Bustle office isn't safe from this dangerously infectious and confounding pop song.

Duh. Even feminists have declared this oft-dubbed "rapey" song too catchy to hate. We all know every lyric, even if it chills to our cores to admit it.

Another duh. It was already a song of the summer before Cyrus blew it up to gargantuan proportions with her controversial MTV VMAs performance. Now it's in your head and completely infamous. (Though, if you ask me, I prefer the Michele Bachman cover.)

There is a cat reenacting the music video for this song, among other ubiquitous parodies. If this song isn't stuck in your head, you probably don't have Internet access.

With all the fanfare surrounding this first song off Daft Punk's album Random Access Memories, it seemed sure to be a disappointment, but instead, we got a song that when played, makes people dance as if they're marionettes. Of course, Pharrell Williams is the puppet master.

Don't even resist. You know you love it. (And technically, this song came out in 2012, but it arguably took over everything after popping up on an episode of Girls in 2013.)

Jay Z's Magna Carta Holy Grail was a bit disappointing, considering its hallowed namesakes, but this song manages to stay in our minds, thanks in great part to the sweet vocal stylings of one Mr. Timberlake.

Trust me. You know this song. It came out at the very, very end of 2012 and since then it's been featured in ads for fast, technologically-advanced wares and one particularly heinous episode of True Blood. Oh yes, and it plays on every radio station not specifically dedicated to easy listening.

If you've ever been to a party and drunkenly danced with the entire room to a song that makes everyone bounce up and down like maniacs (it's to prove that the ceiling really can't hold us), you know this song. And like "Radioactive," it's all over 2013's ad offerings, too.

Bruno Mars is a pop music marketing genius and this is just one of his many "girl, you're so perfect" tunes carefully crafted to make each and every listener feel impossibly special. Plus, it's got old school Michael Jackson vibes, so it's actually really, really fun to dance to.

This song may give you a headache with all the ways its logic crashes in on itself, but it also makes you feel like you're drunk off too many vodka Red Bulls in a seedy club. Oh wait, I guess there isn't necessarily an upside.

I mean, come on, it's Britney (bitch). And while the faux-British accent drives me nuts, this song is impossibly catchy. Well done, Brit Brit.

This song from one of 2013's biggest emerging rappers, Kendrick Lamar, is so ubiquitous that Glee even turned the song title into a cheesy one-liner. That's when you know you've made it, folks.

I don't ever want "dress up like hipsters" and "make fun of our exes" with my friends (I prefer making whiskey cocktails and talking about our plans for world domination), but I do want to sing this song at the top of my lungs when my roommates aren't home.

This song came from Pitch Perfect, which came out in 2012, but for some reason, the simple little tune could be heard absolutely everywhere throughout 2013. (At one point, I remember asking someone why the hell this song was so famous and receiving glares from some folks who were clearly aca-aca-angry.) But even I can admit, it's a fun, little song.

Lorde may rightly call this song sexist, but like "Blurred Lines," it's way too much fun to think about that when I'm singing to it in the car.

Lorde was not only an artist who made us talk like crazy this year (see the above Selena Gomez entry), but she also defied the odds and soared straight to the top of the charts as a 16-year-old with a song about the ridiculous opulence present in music and pop culture. This is one we don't mind having stuck in our heads all day.