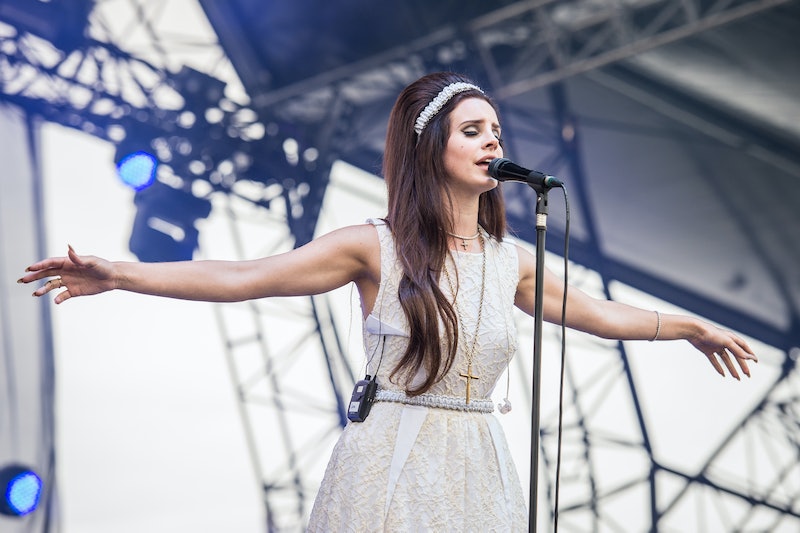 On more than one occasion, the flower crown-wearing chanteuse formerly known as Lizzy Grant has sung about the city I live in, the City of Angels. (Is she the first? No. And I'll bravely go out on a limb and say she won't be the last. L.A. is a magical city worth singing about, dangit!) With her old school-meets-contemporary pop sound, Lana Del Rey's songs about Los Angeles channel the ghosts of Hollywood past, present, and future. Like the iconic Hollywood Forever Cemetery, there is something both spooky and gorgeous about each track. Her lyrics paint a picture of the city that oscillates between dream and nightmare; LDR's L.A. songs address vice, fame, glamour, heartbreak, excess, death, and, of course, driving. (Obviously, driving in L.A. is the biggest nightmare out of all of those themes.)

Is LDR's version of L.A. the version I call home? Well, no. No, it's not. My version would not make for a particularly compelling song. For one thing, 75% of the lyrics would probably be about fighting for a parking spot at Trader Joe's. It's probably for the best she depicts a version of the city that doesn't mirror mine.

Want proof that my Los Angeles songs would be lame? Here's what some of LDR's L.A. lyrics would look like if I put my spin on 'em:

Lana lyric: Singing in the old bars/Swinging with the old stars/Living for the fameMy version: Singing at Dimples/Watching celebrities sing at Dimples/Missing the famous karaoke bar

Lana lyric: Every Saturday night I get dressed up to ride for you, baby/Cruising down the street on Hollywood and Vine for you, baby/I drive fast, wind in my hair/I push you to the limits 'cause I just don't careMy version: It's a Saturday night and I'm driving in circles, baby/I'm on Hollywood and Vine again, baby/I drive slow— is that spot over there?/I'm looking for a place to park that doesn't cost something unfair

“Off to the Races”

Lana lyric: Likes to watch me in the glass room, bathroom, Chateau Marmont/Slippin' on my red dress/puttin' on my makeup/Glass film, perfume, Cognac, lilac fumes/Says it feels like heaven to himMy version: Security guard watches me in the lobby, front room, Chateau Marmont/Sneakin' pics with my phone/pretendin' I'm staying here/Selfie, celeb pic, selfie, celeb pic/Says I gotta give the phone to him

Lana lyric: No one even knows what life was like/Now I’m in L.A. and it’s paradiseMy version: I'm still in L.A. and it's paradise/Oh, except for the drought sitch, guys