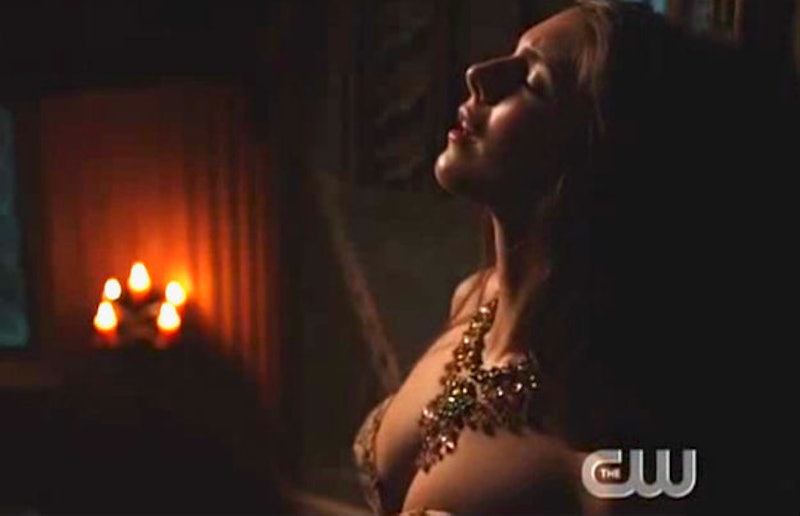 It’s the year that saw the conversation move from HBO and racy cable networks (Mad Men and Girls have included masturbation scenes prior to 2013, as The Frisky recently pointed out) to primetime teen-angled programming on network TV, where that kind of sexual liberation dare not speak its name. It’s the year Anna Kendrick got everyone’s panties in a twist when she tweeted something suggesting she masturbates to Ryan Gosling — ooh, shocker. It’s the year Aubrey Plaza actually masturbated for a scene in a movie about a young woman’s sexual exploration. It’s the year Gabourey Sidibe masturbated on American Horror Story and incurred hatred for doing something natural. (To be fair, the Minotaur that was present when it happened sure wasn’t.)

Taking a less drastic approach in 2013, one woman decided it was high time she educated those still mortified enough by their own private parts to get comfortable putting their hands down under. HappyPlayTime is a mobile app (screenshot below) designed to teach women how to bring themselves to orgasm with their own two hands, and it was released this year to a bevy of criticism and fanfare. Its main goal is educating women in manual masturbation. After all, thanks in great part to Sex and The City and Charlotte’s Rabbit phase, vibrators have been accepted into pop culture and therefore general discussion for years. It’s the matter of women actually touching themselves (like the Divinyls' well known song that’s been condemned to “joke tune” status) that makes some people antsy.

But it certainly shouldn’t be. We live in a society that laughed endlessly at Cameron Diaz putting Ben Stiller’s semen in her hair in Something About Mary — and that was in 1998. We’re the folks who made fan fiction-turned-novel Fifty Shades of Grey, about a sado-masochistic billionaire with a “red room of pain” a national best-seller many times over. Yet, something that many young women learn to do just as early on as young men is somehow considered something other. Cosmo still calls it "indulging" rather than giving it weightier descriptions, such as "important" or "imperative" or "the only thing that keeps me sane." But with all that’s happened in 2013, the tide may finally be turning.

More like this
Adele’s All-Female Lineup Includes Kacey Musgraves, Mahalia, & Self Esteem
By Shahed Ezaydi
Daryl McCormack On His Unusual First Audition With Emma Thompson
By Olivia-Anne Cleary
Zooey Deschanel Can't Be Anyone But Herself
By Samantha Leach
'The Great British Sewing Bee' Semi-Final Is Extra Special For This Reason
By El Hunt
Get Even More From Bustle — Sign Up For The Newsletter