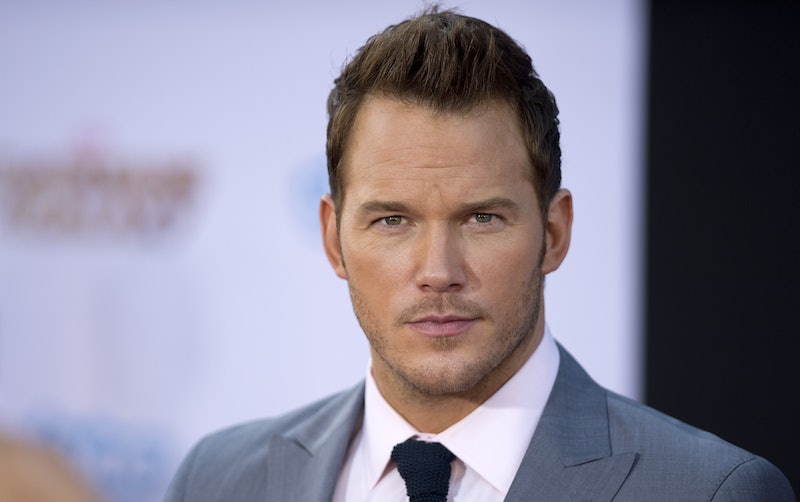 Between last year's Guardians of the Galaxy and this season's Jurassic World, Chris Pratt has been officially crowned as the King of the Summer Blockbuster. It's a wonderful time to be Chris Pratt and he attributes his new physique to his success. Even more recently, in an interview with Radio 4's Front Row (via Yahoo Movies), the Jurassic World star said, "A huge part of how my career has shifted is based on the way that I look, on the way that I’ve shaped my body to look." Which led him to a very important point about objectification in Hollywood. And though he meant well, I just think he got the conversation wrong.

Pratt commented on how the male body expectations mirror the expectations we have for female actors: "I think it’s appalling that for a long time only women were objectified, but I think if we really want to advocate for equality, it’s important to even things out." He goes on to say that we should “not objectify women less, but objectify men just as often as we objectify women.”

OK, Chris. That's a nice thought, but... how about we objectify nobody?

Look, he means well. But there's the issue: I think Pratt is using the word "objectification" wrong, as a catch-all term which includes flaunting one's body, and being admired and desired. "Objectify" means to "degrade to the status of a mere object," and there's a way for men and women to still be sexual on-screen and be appreciated for being the objects of our adoring affection while maintaining their humanity.

Our beloved Andy Dwyer-turned-Star Lord is a perfect example of how one can resist being reduced to an object while still being celebrated as sexual: We almost always integrate his adorable personality into the equation while talking about him. For women there's a way to be sexy that's also empowering. We cast women in movie roles in which they are active and have agency to control their situation. We stop viewing women as passive figures simply in the film for a man to win them over, or to have the man come into their lives to teach them something. For example: Charlize Theron's Imperator Furiosa from Mad Max: Fury Road is being celebrated for her badass sexiness, but she is certainly no object.

Pratt's call for gender equality is well-intentioned, but unfortunately he just misses the mark. With characters like Star Lord and Captain America, Hollywood is giving us hunks with heart. Instead of getting men to take their shirts off just us much as women do, as Pratt suggests, Hollywood should flesh out its female characters, offering the same well-rounded personalities to women, too.

More like this
Chris Hemsworth Joked That Baring His Butt In ‘Thor: Love And Thunder’ Was A “Dream”
By Brad Witter
Jurnee Smollett’s Heart Is Healing
By Rebecca Carroll
What Is Miles Teller's Net Worth? How The 'Top Gun: Maverick' Star Made His Millions
By Meg Walters
Kimberly J. Brown & Daniel Kountz Looked Back On Their ‘Halloweentown’ Romance
By Stephanie Topacio Long
Get Even More From Bustle — Sign Up For The Newsletter