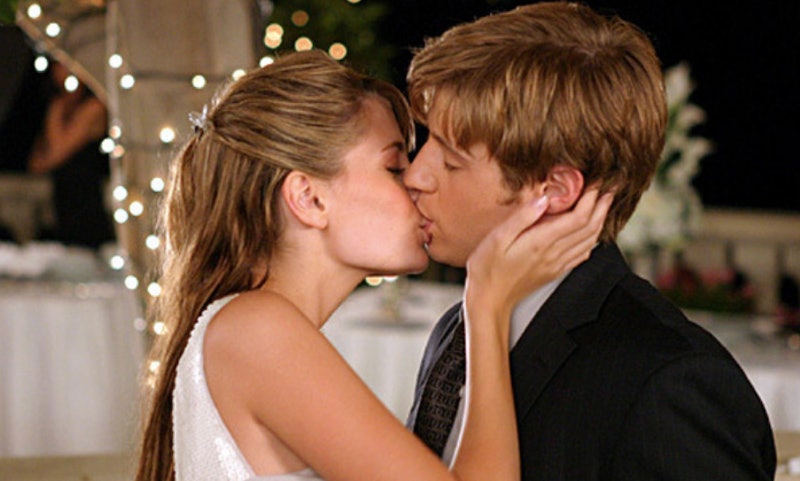 Oh, Marissa Cooper. When I think of Marissa Cooper from The O.C. , I think of a lot of things: Her never-ending teen angst, her ridiculously perfect hair, and, of course, her love interests. It would be impossible to have The O.C. without all of the drama that Coop's romantic relationships brought us — a show simply could not live on the Anna-Seth-Summer love triangle forever. When The O.C. first began, Marissa seemed destined to be with one man only, and that was Ryan Atwood, the "bad boy" from Chino who breezed into town with a cigarette and a great opening line. ("Whoever you want me to be" is still an excellent opener for when you've finally been introduced to that cute guy at the bar... at least, it'd work on me.) But, while The O.C.'s Marissa and Ryan may have walked in and out of one another's lives over the years, there were still plenty of other guys (and one girl) who kept Marissa company romantically.

So how do all of Marissa's relationships (or almost-relationships) stack up against one another? Not everyone was as beloved by O.C. fans as Ryan was, and for good reason. Here's the definitive ranking of Marissa's love life, from the worst to the best.

The baddest of bad boys, Volchok did everything a terrible boyfriend should do. He cheated on Marissa at her own prom, drove a wedge between Marissa and everyone she loved, and caused the car crash that led to her untimely death. He may look good in a muscle tee shirt, but this kid is bad news.

UGHHHHH. That's my reaction every time I remember that Oliver existed. Oliver and Marissa never dated, but he took up so much time with his friendship/stalking of her that they might as well have. There are so many reasons why Oliver is the worst, but perhaps his greatest crime is breaking up Marissa and Ryan once things finally got to a good place. He might have been able to overthrow Volchok as the worst dude on this list, but at least Oliver didn't accidentally kill Marissa.

Johnny is another person who basically stalked Marissa, though he did so significantly less aggressively than Oliver did. Overall my reaction to Johnny has always been "Why?" Did Marissa really need another person to be obsessed with her, especially when the feelings were once again unrequited? (Answer: No.)

Luke was one of the biggest surprises on The O.C. He's definitely done some awful things, but ultimately he went from being a jerk water polo player to an actually decent human being who befriended both Ryan and Seth. Of course, Luke can't be too high on this list: He did sleep with Marissa's mom.

I liked Alex. She was smart, funny, and the alter ego of Olivia Wilde. But, she was also a little possessive of Marissa and kept her apartment well below health code standards. Perhaps the worst thing Alex ever did was try to get her tough guy friends to beat up Ryan, but she came to her senses well before any of that went down.

I liked D.J.! He genuinely cared about Marissa, wasn't a part of the Newport scene, and he was ridiculously good looking. Unfortunately for D.J., Marissa was pretty much just using him to get back at her mother. You should've done better by Deej, Coop.

Oh, did you think that Ryan wouldn't make the top of this list? Of course Ryan would be Marissa's best boyfriend ever — he's Ryan freakin' Atwood, Marissa' soulmate and one fourth of the Atomic County gang. You know that if Marissa didn't die that she'd have walked down the aisle with Ryan in the final scene... sigh. Maybe in our dreams.

More like this
'Friends' Creator Marta Kauffman Opened Up About Misgendering A Guest Character
By Grace Wehniainen
Jesse Tyler Ferguson Had A Funny Run-In With A Fellow ‘Modern Family’ Alum
By Grace Wehniainen
“The Door Is Always Open” For Another 'Breaking Bad' Spin-Off, Says AMC Boss
By El Hunt
Martin Hancock’s Wife Played A Key Part In His Return To 'Coronation Street'
By Catharina Cheung
Get Even More From Bustle — Sign Up For The Newsletter