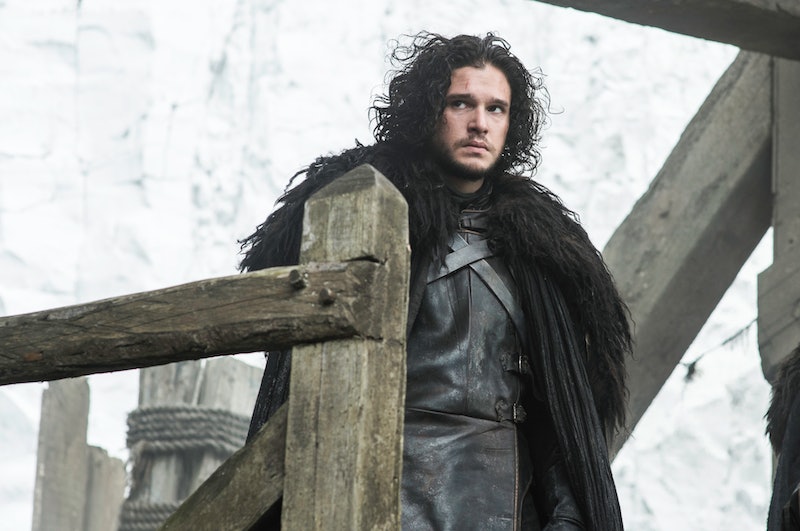 Here I thought I had a fairly keen eye (pun not intended, but I welcome accidental puns with open arms) for detail. I thought wrong. When I saw the last scene of the Game of Thrones Season 5 finale, I didn't notice anything out of the ordinary about Jon Snow’s eyes. I didn't give the glassy eyes of the maybe-dead hero of Westeros a second thought. *Rings bell* Shame. *Rings bell* Shame on me, because those peepers might've left behind a potentially important clue. Thanks to Josh Wigler’s Jon Snow eyeball deep-dive over at MTV.com, my own eyes have been opened.

After I re-watched the scene a few times (and yes, staring at Kit Harrington's beautiful face for 15 minutes straight is as tough as it sounds), I believe I've reached a conclusion: I'm pretty sure his eyes turn purple. No, wait. Wait wait wait. They're lighter. No no no. I take it all back. They're just dilated. Actually, they do look lighter. And purple. And dilated. And— Eh, let's just say the jury's still out and move on, cool?

Though I cannot decide what actually happened to Jon Snow's eyes, that didn't stop me from hypothesizing what all of it could mean. And yes, all of my hypotheses are reasonable, not-bonkers hypotheses. Legitimate, supported-by-science hypotheses.

What lighter eyes could mean:

What purple eyes could mean:

What dilated eyes could mean:

OK, OK. You got me, Jon Snow. Eye know nothing, Jon Snow.