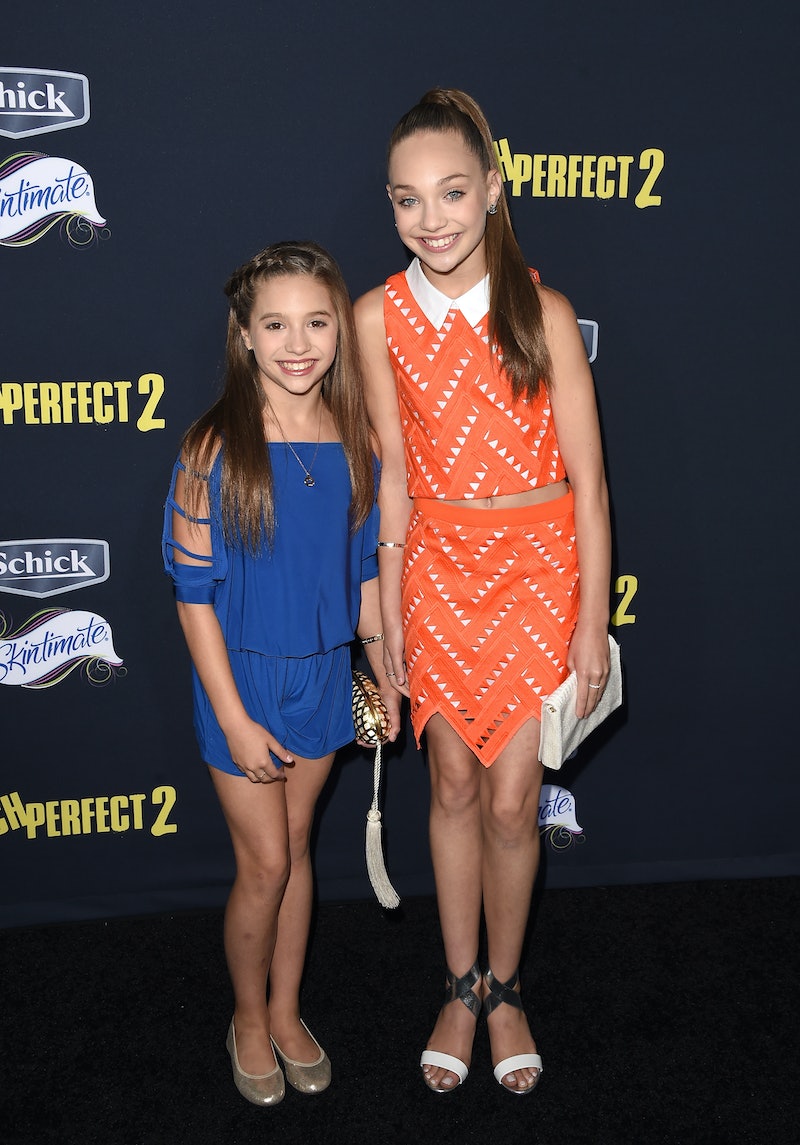 Dance Moms fans know that being part of the ALDC means you will inevitably be compared to Maddie Ziegler. And (spoiler alert!) Abby Lee Miller will never see anyone as even capable of approaching Maddie's level. It's a constant source of frustration for the moms, but there's one who doesn't seem quite so bothered by it — Melissa Gisoni, who is also mother to Mackenzie Ziegler. In last week's Dance Moms episode "Maddie vs. Mackenzie," three ALDC students competed in the same solo category: Maddie, Mackenzie, and JoJo.

Maddie already knew her tap dance, while Mackenzie's routine was described by Miller as difficult and technically intense. Miller and all the parents made clear that they expected Maddie to win, while Mackenzie herself said, "I think Maddie's going to win... no, I don't want to say that, because that's rude to JoJo." It was sad to see her automatically take herself out of the running, but not surprising. Mackenzie is constantly being compared to her sister in a negative light, rather than being given credit for her own strengths, which are quite different from Maddie's, but equally impressive.

Earlier this season as she rehearsed a solo, Miller and her assistant choreographer berated Mackenzie for not learning the routine more quickly. "Maddie would have gotten it right hours ago," they told her. And, last year, Mackenzie was assigned the routine "Cry" — complete with the exact same choreography, music, and costume that Maddie used in Season 1. As if that wasn't blatant enough, a box of Maddie performing was shown in the lower corner of the viewers' screen as Mackenzie danced:

When this recent competition day rolled around, Miller reiterated that it wasn't really much of a competition at all because: "I mean, come on. She's Maddie." In the end, both Mackenzie and Maddie delivered top-notch performances (as did JoJo). Different performances, yes. But all uniquely wonderful.

This jazz-acro routine was no easy feat, and Mackenzie hit every trick with sass and a smile on her face. Even Abby described it as nearly perfect.

Maddie's impressive tap solo was a vastly different style than her sister's and, on this particular competition day, it didn't turn out to be a winner.

When Maddie was named second, everyone immediately assumed Mackenzie had failed to even place. Then Mackenzie was crowned the winner, and the shocked look of excitement on her face was priceless. Her victory was hard-earned and well-deserved. To their credit, both Miller and Gisoni seemed genuinely thrilled and proud when Mackenzie was named the winner. But, Gisoni quickly changed her tune backstage. When Mackenzie made the fair point that Maddie didn't seem happy for her, Gisoni told her daughter to shut up.

After the girls left the room, the other moms asked if she thought Mackenzie should have won. Gisoni initially refused to answer but after about five seconds of pressing, she said no, because Mackenzie was adorable but Maddie was fabulous. It was heartbreaking to see Gisoni speak that way about her own daughter, but the other moms are certainly not blameless in this situation. It seemed like they wanted her to say Maddie deserved to win, just so they could have another vent session about the favoritism.

If any other dancer had defeated Maddie, I doubt the moms would have peppered Gisoni with questions about who should have won. Chloe Lukasiak, who has since left the ALDC, beat Maddie multiple times (including at Nationals), and Gisoni wasn't pressed to give an answer on whether or not she thought Maddie should have won. Sure, we all know what the answer would have been, but the other moms are perpetuating the comparison between Maddie and Mackenzie. Doing this only hurts Mackenzie, who already puts plenty of pressure on herself.

There's a level of subjectiveness in any dance competition, especially when the routines are in vastly different styles. In last week's episode the judges preferred Mackenzie's performance. Both girls are extremely talented but possess different strengths, and Mackenzie's strengths won out on this particular day. There should be room for more than one star in both the ALDC and the Ziegler household. The rampant favoritism towards Maddie has given her many wonderful opportunities, but it hasn't done her any favors in terms of learning the value of good sportsmanship.

It's healthy to come in second once in a while; it keeps dancers from getting too comfortable. Backstage, Maddie described the competition as "stupid" and told guest choreographer Travis Payne that she "definitely deserved" to beat Mackenzie. Her behavior was not only poor sportsmanship, but also deplorable given that she couldn't bear to see her own sister have the spotlight just once. However, it's not all that surprising — every authority figure around Maddie has repeatedly told her that she's head and shoulders above everyone else, including her sister. It's time to stop comparing these two talented performers and let them both shine. They've earned it.