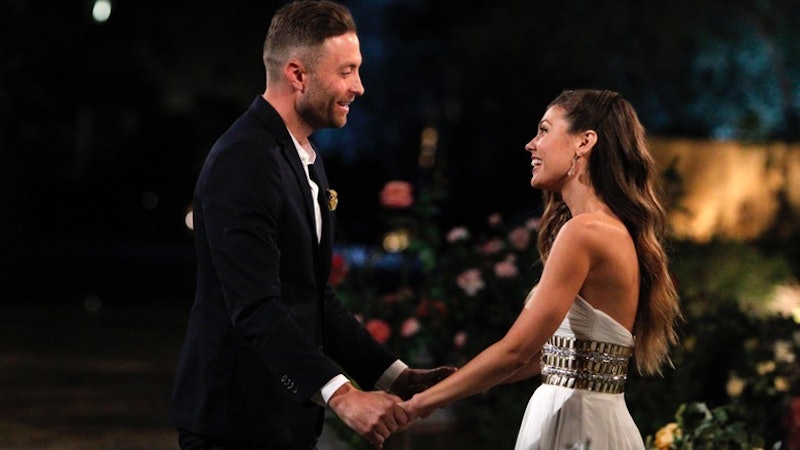 Even since her Bachelor days, I've always loved Britt Nilsson. She might have been criticized for the amount of crying she did on the show, but that was part of what made me empathize with her most. As someone who also wears her emotions on her sleeve, Britt getting emotional is what made me relate to her, but now? I have a feeling it's all smiles from here on out. She might not have won the Bachelorette vote at the beginning of this season, but she walked away from the show with something even more important: Brady Toops. Since the minute he chose to leave The Bachelorette in favor of getting to know Britt better, these two have been seemingly inseparable. And, although it might be a bit too soon too talk marriage, I'm doing it. Britt and Brady should definitely get married.

Since I know they're busy people — Brady with his music, and Britt with a life of her own outside of reality TV — I've taken the liberty of planning their wedding myself. These two are adorable, but they're also fairly predictable, so it's easy to imagine what their future wedding might be like.

Oh, and ABC? Film this one for a special, please. I think I speak for the entire country when I say that we need to see this girl get her happily ever after.

1. It Will Be Super Hipster

Just like the bride and groom themselves. And, since these two apparently have a huge appreciation for nature, it'll be outside, and Britt will wear a long and flowy dress, and probably a flower crown.

2. There Will Be Live Music

And, it will probably be played by one of Brady's friends. Maybe even Brady himself? It would be so, so precious if he wrote a song for Britt about their love to sing to her on their wedding day. Yes, I am fully aware I am gushing over the wedding of two people who have dated for, like, a month and are not even engaged.

3. And A Photo Booth

Not those fake photo booths where you use props and a real photographer takes your picture. No, I'm talking real photo booth, where you sit inside and print out the actual strips. This seems to fit the hipster theme, I think. If not, there will definitely be a polaroid camera on each table so guests can capture their favorite moments.

4. And It Won't Be Traditional At All

Don't expect to hear the wedding march or witness a garter toss or dance the "Cha-Cha Slide." These usual elements of weddings definitely wouldn't happen at Britt and Brady's. In fact, it'll be way more likely that actual fairies will fly in to cut the cake and that Britt will have a makeup artist on hand to make sure nobody goes to bed fresh faced. And, it's going to be so beautiful. I love weddings!