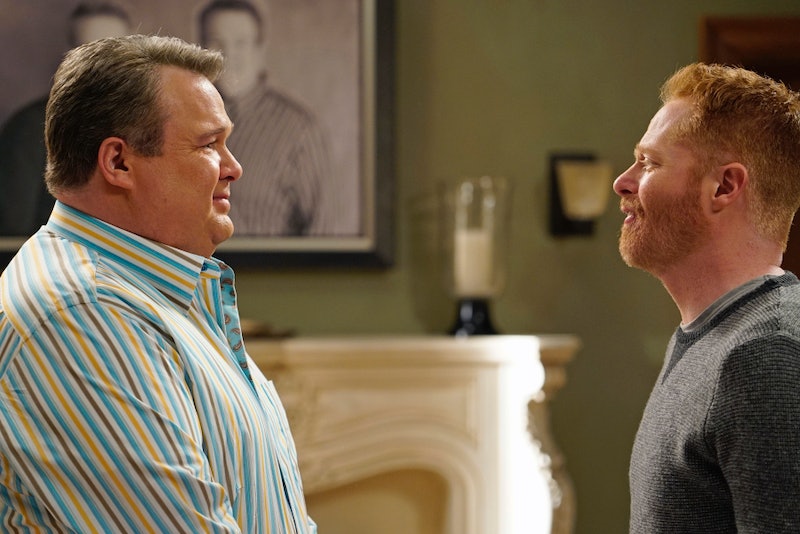 June 2015 has long been on the hearts, minds, and calendars of those fighting for marriage equality. After months of waiting and speculation, the Supreme Court has finally ruled in favor of same-sex marriage across four states in Obergefell v. Hodges. The landmark decision grants same-sex spouses most of the same benefits as heterosexual spouses, making it a huge step toward ultimate equality. The path to this moment has been a long and winding one, and is the result of many factors and influences — some of which might surprise you. A key but often overlooked influence in social progress, for instance: pop culture, television in particular. These days, more and more TV shows are featuring same-sex marriages between main characters, a move that indicates subtle progress toward equality. These plots are not only important — they're game-changing.

They say art imitates life and, though some might not write off their Netflix marathoning sessions as "art appreciation," there is certainly a connection between what's happening in shows on the small screen and what's happening in culture and society at the time it airs. Television acts as a social barometer — it's a product of our culture and thus reflects the changes that shape themselves in society.

According to Uproxx in a 2015 study, the average American watches 35 hours of television per week. That's right, the average person spends over one seventh of his or her week watching TV. With that level of frequency characters and stories we see on TV are more than just fiction; they are covert advocates of social progress. The first televised same-sex marriage was on a Fox sitcom called Roc in October 1991. In the nearly 24 years that have passed since then, LGBT issues have become everyday topics in pop culture and, though the process of getting regular portrayals of non-heterosexual relationships on TV has not been an easy one, the dialogue that has been sparked as a result has been overwhelmingly positive.

In light of SCOTUS' positive ruling on same-sex marriage, it seems only prudent to take a look back at some of the landmark same-sex marriages on television over the past few decades that have helped people see love — and marriage — as an experience that every human is entitled to. This historic decision been a long time coming, and TV moments like the ones below represent small threads of change and activism for the LGBT community.

Though Roseanne might not be the first media example that jumps to your mind when you think about same-sex marriage, Roseanne was, in fact, one of the earlier shows to tackle the topic. In a 1995 episode titled "December Bride," recurring character Leon (Martin Mull) marries his boyfriend (Fred Willard) in an over-the-top (and, unsurprisingly, pretty redneck) wedding. As a 1995 article from Spokesman-Review reports, this particular episode aired in a later time slot than Roseanne usually aired, due to, as an ABC spokeswoman stated, the "adult content."

Shortly after Roseanne saw Leon marry his boyfriend, Friends saw the marriage of Ross' ex-wife, Carol, to her partner, Susan. Carol and Susan are married in "The One With the Lesbian Wedding." The episode aired in 1996, and Carol and Susan's wedding was a pointed social commentary, encouraging Friends' audience to accept the union (highlighted, in particular, by Ross' supportive relationship with Carol as he offers to walk her down the aisle when her parents refuse to come to the wedding).

According to the Daily Dot, Friends executive producer, Marta Kauffman, said that "NBC expected thousands and thousands of phone calls and hate mail" after "The One With the Lesbian Wedding" aired. The result? Just four complaints.

Say what you want about this show, but no one can deny it's been an important, influential show when it comes to the acceptance of same-sex couples. I will always credit Glee for doing a stellar job of dealing with hot-button social and cultural issues.

Glee consistently showed its characters dealing with tough issues and struggling along their path towards self-acceptance. After following its regular characters, Kurt, Santana, and Brittany struggling to come to terms with their sexuality for seasons, the audience was finally rewarded (and encouraged to be a bit more tolerant) with the surprise double wedding episode, "A Wedding," which aired in 2015, featured not just Santana and Brittany's wedding, but Kurt's surprise wedding to Blaine as well.

Movies and TV have both evolved over time to give us many examples of healthy, loving same-sex relationships. Thankfully, not all of these relationships have been fictional. Ellen DeGeneres has been a vocal participant in the fight for marriage equality, using her talkshow to detail her own personal experiences in her marriage with Portia de Rossi.

After seasons of pulling for the "it" couple of Grey's Anatomy, Derek and Meredith, Grey's audiences were given a new couple to root for: Callie and Arizona. Callie and Arizona's relationship was not without drama (was anything ever without drama on Grey's?) but they made it through the rough patches and their love ultimately prevailed.

In an incredibly touching moment, Conan officiated the wedding of his longtime costume designer Scott Cronick to his partner, David Gorshei, live on an episode of Conan in 2011.

Television may be a casual past time, but looking at this list, it's undeniable that it has influenced society in a pretty meaningful way.