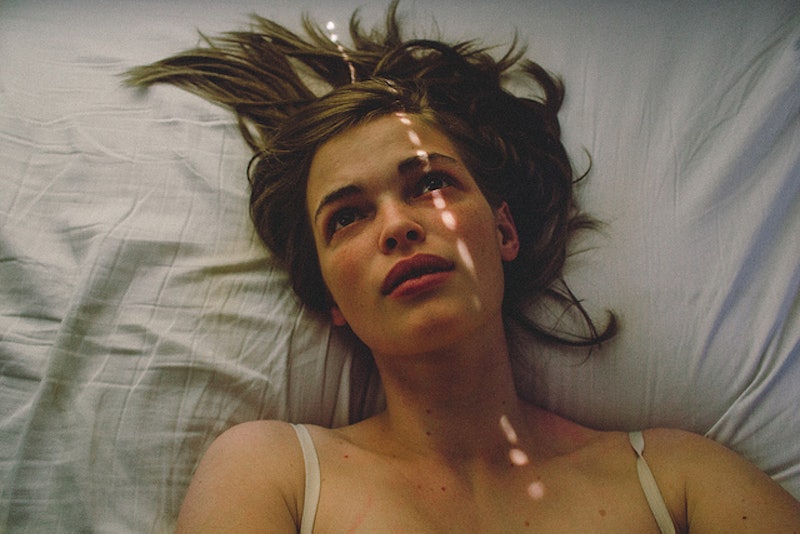 It happens all the time in relationships: Someone wakes up on the wrong side of the bed. Or shows up for a date in a bad mood, or overtired, or hangry. But how do you handle your partner's bad mood? It's easy to take it personally. We all do at times. But when you start to take something like this personally, take heed: It's just not about you. When you take it personally, you're opening yourself up to a whole lot of misery. Here's why: You know how sometimes you work 10 hours after sleeping five hours and you leave work crabby and exhausted and all you want is someone to bring you a platter of delicious food, run you a bath and tell you how awesome you are? Problem is, when you're in that state, it's hard to be lovely. You're more likely to be bitchy and borderline insane. Or terse and withdrawn — however it is that you deal with feeling completely overwhelmed. If you're with someone who is understanding, supportive and doesn't take umbrage to every little thing that you do, you have a shot at having a good night. If not — well, let's just say the only thing worse than having a tiring and difficult day is a having an exhausting argument in the evening.

I'm an advocate of preparing that meal, running that bath and lavishing that praise on your partner, because sometimes they will have a knock-down, drag-out day and will need you to be the rock. In relationships, we take turns being each others' pillars.

I don't mean some kind of codependent situation where someone is always playing caretaker. I'm talking about relationships that are otherwise healthy. If you're in a verbally or physically abusive relationship, it's still not about you (no matter what your partner might have you believe), but I wouldn't apply any of this to that, because it's not OK to let an emotionally manipulative jerk get away with whatever. I'm talking about if you're in a happy, fulfilling relationship overall. I would never advocate being a doormat.

An illustration: When I was 17, my boyfriend's mom forwarded an email to him that she'd penned to his cousin who'd just been sent to jail or something. I don't know — don't ask. I don't remember the details at this point. What I do remember is that it was an advice letter of sorts, and in it she divulged a bunch of things she'd learned over the years about life in a bulleted list. I remember none of these bullets except one: Never take things personally, because absolutely nothing other people do is ever about you.

This one really hit home for me, because it seemed so revolutionary. When my brother is in a bad mood? Not about me. When my friend is super brusque with me? Not about me. When a random guy gives me the stink eye at the grocery store? Nope, not about me. I use this all the time in my own life. This is all to say that I try to live in such a way that I don't take personally things that are not about me.

I've learned that contrary actions are often the answer: If I'm feeling offended about something, the thing to do is not blow up and get angry and make a big scene. Usually the thing to do is whatever it is I don't feel like doing. So — if I want to make a big deal about that which has nothing to do with me, it's best to contain the urge, at least in the moment. To take it a step further, I believe in compassion above all. If someone is having an awful day and being super short with me, I am all about making a cup of tea for them, or bringing them a little present, or just being present with them. It's simple, but it's not always easy.

Moreover, I believe in not asking what someone needs, or waiting to be asked, but just doing something nice for someone else. So brew that tea, run that bath, prepare that meal. Hold that tongue. Whatever it takes to be there for your partner (or your friend), who is obviously having a hard time — not just being a rat for the sake of being a rat.

Let it go. I'm a big fan of the phrase "like water off a duck's back." See also: "Wear life like a loose garment." Or how about the age-old "don't get your panties in a bunch"? Although I'm against cliches, I'll make an exception in this case. Because I'm wearing life so loosely. Like a pair of UFO pants.

More like this
The 19 Best Tweets & Memes About Bisexual Awareness Week
By Lexi Inks
10 Ways To Be More Empathetic To Your Partner
By Raven Ishak and Lexi Inks
21 Signs You're Not In Love Anymore
By Sara Altschule, Kathleen Ferraro and Carolyn Steber
Are Quality Time & Gift-Receiving Love Languages Compatible?
By Lexi Inks
Get Even More From Bustle — Sign Up For The Newsletter